Epidemiological Algorithm Scans Your Tweets, Can Predict You’ll Get The Flu Next Week

In a crowded urban area like New York City, it’s impossible to keep your distance from people who may be... 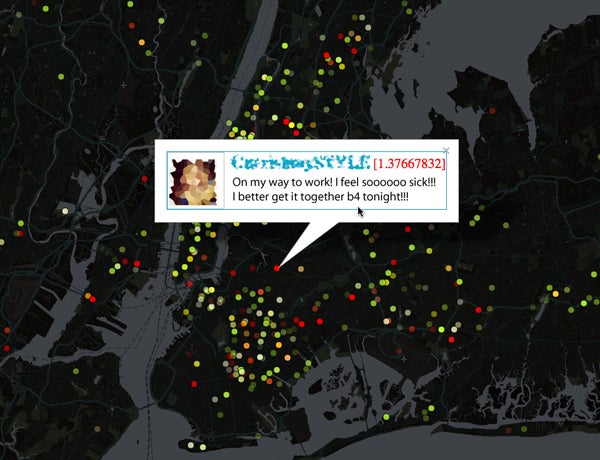 In a crowded urban area like New York City, it’s impossible to keep your distance from people who may be sick. If you’ve left your apartment–and maybe even if you haven’t–there’s a decent chance you’ve been around someone who is under the weather and there’s really no way you could know it.

A team at the University of Rochester wanted to find a way to change that. If you knew you’d been in proximity of someone showing flu symptoms, would you take preventative measures? Could flu outbreaks be contained through better information? The team began mining geo-tagged Twitter data from New Yorkers and the results are pretty astounding–the team found it could foresee when an individual is about to come down to the flu some eight days before that person began to show symptoms.

This sounds something like Google Flu Trends (which monitors for outbreaks by noting when and how often people in a geographic area search for flu-related terms) but it goes beyond that. By analyzing 4.4 million tweets tagged with geolocation data over one month using a special algorithm, the team was able to heat map flu incidences around the city. The algorithm knows how to tell the difference between non-literal terms (“so sick of work today you guys;)”) and tweets that actually express a flu symptom. From the GPS tagging, they could also see where these sick-feeling people were circulating in the city, and which other tweeters were circulating near them.

The resulting analysis showed that the researchers could predict when healthy tweeters were about to get sick with about 90 percent accuracy up to eight days in advance. Don’t misread that number, however. The researchers were correct about 90 percent of the cases where they thought the healthy person might get sick, but it doesn’t account for all the people who got sick that the system didn’t catch.

In other words it’s not perfect, but it does open the door to some interesting public health applications. For instance, if you’ve been somewhere where incidence of symptoms is high during a given day, you might receive a tweet telling you that you’re at high risk of falling ill in the next week. Time to break out the echinacea.