How do you tell if a flu is dangerous enough to bring down the Olympics? Map diseases in real-time, throughout the entire country 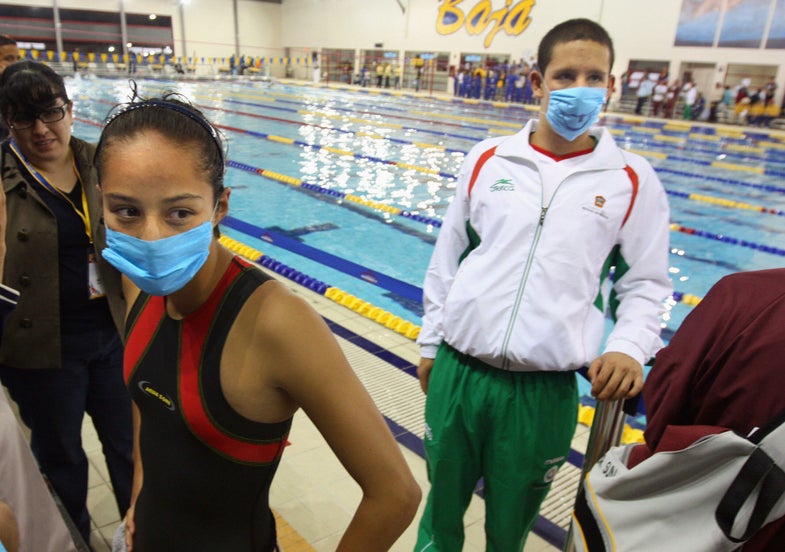 Mexican athletes wearing face masks at the Nationals Olympics 2009 in Tijuana on April 26, 2009. The Mexican national games were canceled due an outbreak of swine flu In Mexico. The authorities reported 103 deaths in Mexico due the epidemic. AFP PHOTO/DANIEL CONEJO (Photo credit should read Daniel CONEJO/AFP/Getty Images). DANIEL CONEJO
SHARE

Right now in London and various sites around the UK, more than half a million international travelers are sharing stories, beers, doner kebabs, close living quarters and–let’s be frank–the occasional mattress. Roughly 17,000 athletes and officials from hundreds of countries are packed into the Olympic Village alone, and that doesn’t take into account the spectators–more than 8 million tickets will be punched at the Games–who have piled on top of greater London’s nearly 8 million inhabitants. Culturally speaking, it’s a marvel that we can do this and all get well enough along. Epidemiologically speaking, it’s a nightmare scenario.

An international gateway city like London is certainly no stranger to the comings and goings of large numbers of people, but when this many people settle into close proximity over an extended period–eating the same things and sharing the same spaces for several days or weeks at a time–it’s the perfect recipe for pathogen outbreaks. A microorganism that might be fairly benign in one part of the world can blossom among a population with low immune resistance. Food-borne illnesses threaten at every food stall. Something flu-like, that spreads through normal human contact, could potentially clean house.

The key to maintaining the public health during something as massive as the Olympic Games isn’t battling every individual bug but quickly containing any pathogen that does get loose in the population, and to do this the UK’s Health Protection Agency (HPA) has developed what is being billed as “the world’s largest health surveillance system.” By rapidly meshing many different streams of information pouring in from hospitals, general practitioners, clinics, infirmaries, and health care hotlines across the UK, the HPA has developed a way to measure and monitor the public health in near-realtime, ensuring that any pathogen outbreak is quickly identified, diagnosed, and contained before the whole of London comes down with the sniffles–or worse.

While the HPA’s system is imperfect, stitched together from a mash-up of pre-existing information channels (reports emailed and phoned in to regional health authorities), and newer, digital data streams (online systems that beam anonymized patient data from hospital databases to authorities automatically), it’s likely the most ambitious public health monitoring system ever deployed. It’s not just a model for future Olympic Games, but for the future in general; as global populations continue to swell and our urban centers become both larger and more connected, systems like this will help cities and states keep vigilant watch on their people’s collective health. Here’s how it works.

“In this kind of epidemiology, timeliness trumps complete data sets. The threat picture is constantly evolving.”The HPA has collected certain kinds of data from hospitals, clinicians, and general practitioners for some time now, but to be truly useful the data needs to be centralized as quickly as possible. To that end, the HPA has automated as much of the data flow as was feasible for the 2012 games. Anonymized diagnostic data now pours in from emergency rooms and hospital labs in realtime via automated systems–when nurses and doctors enter a patient’s information into their in-house computer systems, an anonymized report is automatically generated and sent to the HPA immediately. The HPA has also asked doctors around the country to include a notation in such reports for Olympics links, designating the patient as an athlete or coach, a staffer, a spectator, or someone who has otherwise been in or around an Olympic venue. Even in cases where doctors cannot diagnose an infectious illness, the HPA has created a means of cataloging the symptoms and defining as much as possible the condition, allowing it to identify new or emerging infectious diseases that haven’t been seen before.

This near-realtime clinical data builds the foundation of what becomes an evolving threat picture. The HPA models include data from hospital labs as it streams in over the Web via a secure system called CoSurv, but the models don’t wait for lab work (which can take hours or days to process) to begin painting that picture. Clinicians have been put on alert for a spcific list of infectious diseases (authorities are actually particularly concerned about food borne illnesses, as stomach bugs can spread with impunity in close quarters like the Olympic village–just look at historical examples of cruise ship outbreaks for an example of this) as well as symptoms of chemical contamination. When they see symptoms of any of these they report them to the HPA immediately based on clinical (rather than lab) diagnosis. In this kind of epidemiology, timeliness trumps complete data sets. The threat picture is constantly evolving as more and better data comes in (from the lab, for instance), but that the HPA is always working from the most immediate information it can get.

For the HPA, that paints a pretty decent picture of what’s happening in hospital wards, but to fill in the holes in their canvas officials there wanted more data from alternative sources–general practitioners, walk-in clinics, or people calling into national health hotlines–that aren’t plugged into the same system. This data isn’t quite so automated–generally doctors or hotline operators have to phone or email it in to the HPA–but it adds another layer geographically-relevant symptomatic data to the HPA’s ongoing assessment.

IF THERE’S AN OUTBREAK

Say a clinic in East London begins showing a spike in incidences of extreme stomach pain and nausea that is considered above normal levels for this kind of illness. This symptom data passes through the HPA’s regional office first, and a flag goes up. Perhaps it’s an anomaly, but now it’s on the authorities’ radar. This data travels on to the HPA’s West Midlands office where it is fed into an algorithm-based computing system that quickly extrapolates the overall public health picture of the UK at that moment. Here, the system notes that a spike in similar symptoms has been reported at Weymouth and Portland on the South Coast, where the sailing events are held. The system makes connections between the two; a potential outbreak of some kind of stomach-pain inducing pathogen is brewing. Health authorities are now on alert.

As one day turns over to the next, more data comes streaming in from both regions. In East London, it turns out several members of a large tour group dining at the hotel restaurant got ahold of some salmonella. On the south coast, a bout of stomach flu is circulating among some locals unrelated to the Olympics–a blessing, since Olympic athletes, staff, and spectators are doing a lot of traveling around. The cases are unrelated and crisis is averted, but the important thing is that the HPA and other health authorities were able to connect the dots almost immediately and take precautions. By centralizing symptom and diagnostic data and running it through these algorithms, the HPA can not only monitor the entire UK at once, but can identify trends, outliers, and abnormalities in the public well being with unprecedented speed.

Computationally speaking, this is tough work. A very small and mostly harmless incidence of a rare pathogen might raise an immediate statistical flag while a potentially hazardous symptomatic change in a known pathogen might fall within the statistical “safe zone” while actually representing the greater threat. The algorithms try to mitigate for these kinds of statistical problems, and as algorithms do, they will get better via time and testing. For now, they provide the best rolling picture of an entire nation’s realtime health that authorities have ever seen. 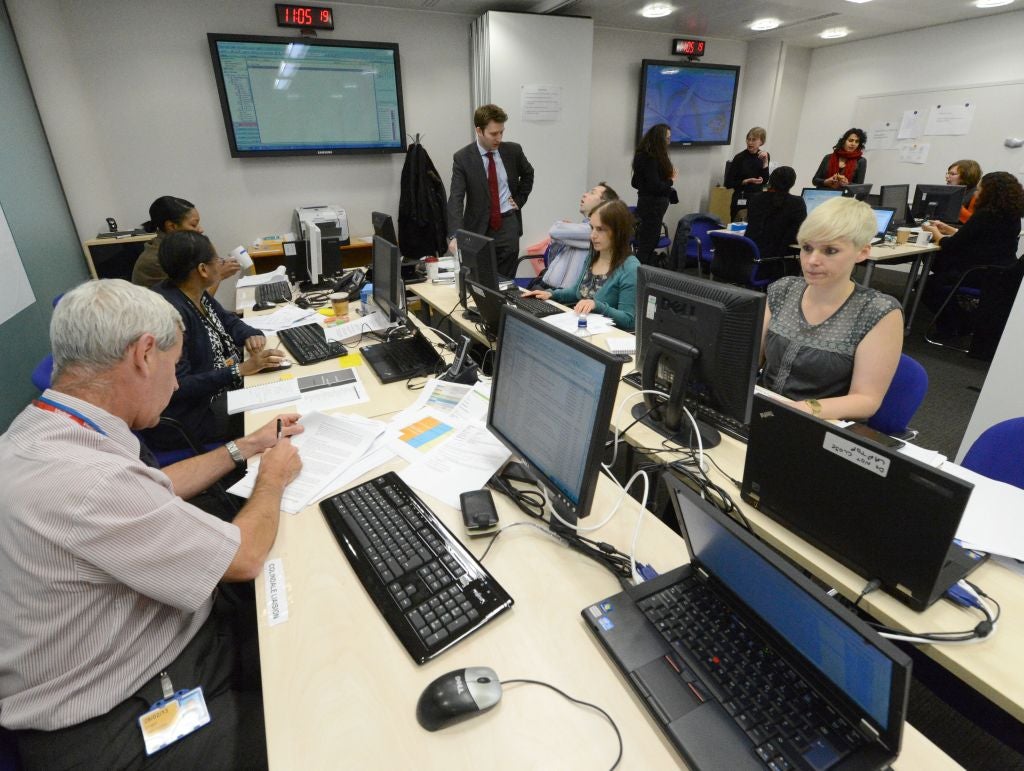 While the HPA’s system is far from flawless–relying on general physicians and nurses to phone in symptom reports not only opens the door to under-reporting but also pulls them away from their primary jobs–it is an ambitious attempt to leverage the power of Big Data into better public health. It’s a fairly strong argument for the digitization of the medical field in general, and with more information fed automatically into the loop, future systems built on this model could be powerful tools for threat prediction and preventative care.

A system where nationwide, anonymized symptom data flowed freely and automatically to centralized computing centers like that at the HPA’s West Midlands office could revolutionize the ability of authorities to rapidly respond to emerging threats. But the HPA isn’t even tapping some of the richest data streams available–those provided freely by citizens themselves. We’ve seen how systems like Google Flu Trends can accurately predict incidences of flu outbreak in a given area simply by trolling search terms for indicators of flu activity. And just this week we learned about an algorithm that scanned geotagged tweets in NYC to accurately predict which users were about to get sick up to eight days before they even showed symptoms.

That kind of data is everywhere, and it’s ideal for taking the pulse of large groups of people–the same kind of large groups currently tweeting so much from London that Olympic organizers have asked them to tone it down (it’s disrupting television coverage apparently). That’s why the UK plans to leave large parts of its health surveillance system in place after the Games are overwith (it will likely scale back the frequency of some kinds of reporting, though it will keep the technology in place to ramp it back up during an emergency). As global populations continue to swell and our metropolises become bigger, denser, more diverse, and better connected, epidemiological situations like that presented by the Olympics will become less the exception and more the norm. The ability to quickly crunch disparate data streams into a perfect picture of public health will be the difference between staying out in front of emerging biological threats and constantly trying to chase them down from behind.