In One Hour, For Less Than a Buck, a Sensor Made of Jell-O and Foil Detects Acute Pancreatitis

If there were a distinction one could earn for practicing smart medicine on a shoestring, a UT grad student would... 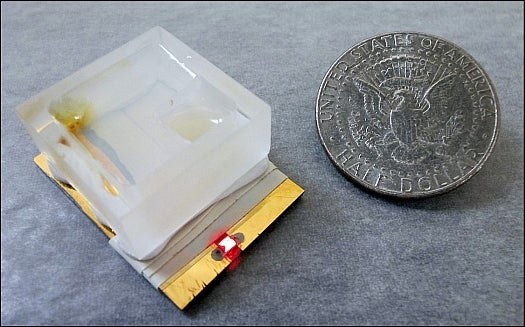 If there were a distinction one could earn for practicing smart medicine on a shoestring, a UT grad student would be high in the running. Using a aluminum foil, gelatin, milk protein, and a cheap LED light–items that collectively sell for under a buck–he’s created a fast, one-hour test for acute pancreatitis.

This test is way faster than existing diagnostics for acute pancreatitis, a condition in which sudden inflammation of the pancreas can cause a good deal of pain, fever, shock, and occasionally death. The sensor is basically a battery with a two-tiered, enzyme selective switch. To test for acute pancreatitis, a bit of blood extract is dropped on a layer of gelatin and milk protein. If there’s enough trypsin–an enzyme that exists in elevated levels in patients with the condition–it eats right through the gelatin/protein mix.

At this point a drop of sodium hydroxide is added. If the trypsin has truly eaten through the gelatin, the sodium hydroxide is exposed to a layer of foil below, where it will begin eating a hole. With both the gelatin and the foil dissolved, a circuit is able to form between an iron salt at the cathode and a magnesium anode, lighting up the LED. If the LED lights up in less than an hour, the patient has acute pancreatitis.

“We’ve turned Reynold’s Wrap, Jell-O and milk into a way to look for organ failure,” Brian Zaccheo, the UT grad student behind the sensor, told Texas Science. Perhaps best of all, it’s the size of a quarter, costs less than a dollar, and requires no external electricity source (in fact, it is a battery). That means it could go virtually anywhere, providing a cheap means of diagnosing acute pancreatitis in the developing world or in out-of-the-way locales.