A Pacemaker for Your Gut Feigns Fullness, Tricking You Into Eating Less

European regulators have approved the sale of a new medical implant intended to be a less invasive option than gastric... 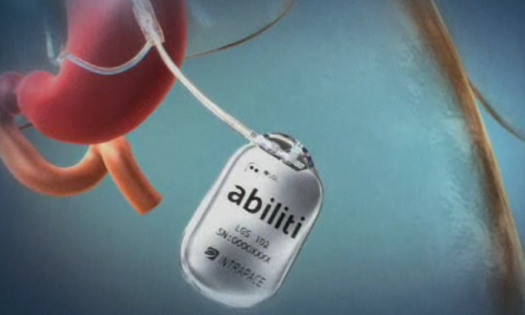 European regulators have approved the sale of a new medical implant intended to be a less invasive option than gastric bypasses or stomach stapling procedures: a “gastric pacemaker” for the gut. When a person is eating, a device implanted in the abdomen triggers a premature notion of fullness by stimulating stomach nerves.

The device, made by Mountain View, Calif.-based IntraPace, will be implanted in the first commercial patients later this week after trials showed fairly impressive results: 65 patients lost an average of 22 percent of their body weights after one year. Some patients shed as much as 38 percent of their poundage.

Abiliti, as the device is commercially called, is implanted laparoscopically inside the abdominal cavity but outside the stomach, with two leads connecting it to the stomach wall. The sensing lead passes through the stomach wall and detects when a person begins to eat. This in turn sends a signal to the second lead, an electrode, which stimulates stretch receptor nerves on the outside of the stomach. In other words, it tricks the nervous system into thinking that the stomach is stretching when it’s not and delivers that message to the brain through the vagus nerve.

And because eating less only gets patients halfway to living right, Abiliti also contains an accelerometer that records how much exercise a patient is getting. Doctors can download this data wirelessly.

Of course, tricking the nervous system in this way can eventually lead nerves to become used to the false stimulus and eventually learn to ignore it, but the success of the trials suggests that–for at least year, anyhow–the device is effective at reducing appetite and helping obese patients shed pounds. And its minimally invasive insertion beats stomach stapling and gastric bypass surgeries, both of which involve invasive procedures and the associated risks that go along with them. Such benefits don’t come cheap; for the device and procedure, patients are shelling out a hefty $21,000.