By Shining a Laser From the Ground, Researchers Could Easily Measure Earth’s Magnetic Field 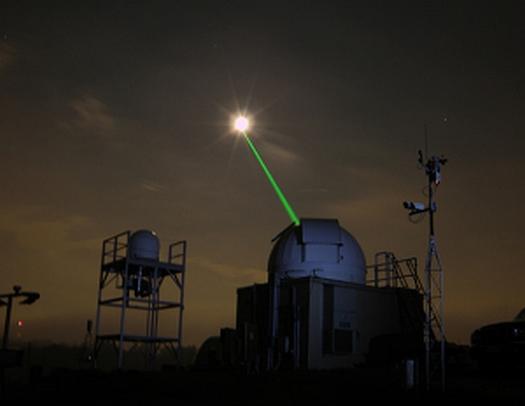 To map the earth’s magnetic field, scientists usually take readings from one of a number of satellites, a process that is expensive and often less-than accurate. Physicists at UC Berkeley have a better idea: measure the earth’s magnetic nuances using a single ground-based laser to examine the spin of sodium atoms 56 miles up in the sky.

The magnetic field of the planet at a given locale influences the rotation of the atoms in that locale, and by studying that spin with a relatively simple laser-telescope combo researchers can determine the magnetic field at a given place without consulting a satellite. Unlike satellites, the ground-laser setup isn’t in motion relative to the earth. Its magnetic readings also aren’t confused by other science tools the way readings can be marred when taken by instrument-heavy satellites.

Aiming a precisely tuned 20- to 50-watt orange laser at a six-mile-thick band of sodium atoms in the mesosphere (some 56 miles up) excites the atoms, causing them to fluoresce. The degree of fluorescence depends on the spin polarization of the atoms when the laser strikes them, allowing researchers on the ground to take measurements from which they can determine the magnetic field at that point in space.

At least, that’s the theory. ESO researchers who collaborated on the idea are developing a 20-watt modulated laser that will be deployed at the Very Large Array in Chile’s Atacama Desert to test the idea.