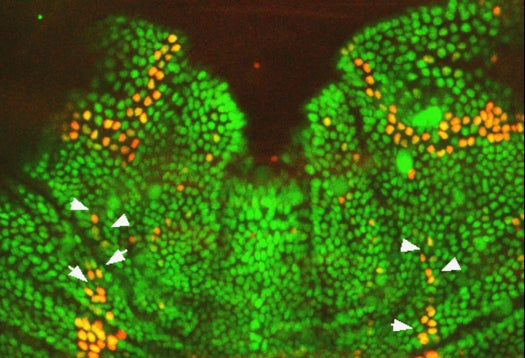 It’s not the first time we’ve seen an insect solve a problem that plagues computer scientists — bees can do it, too — but the fruit fly discovery does one better, leading to an algorithm that can be used to develop more efficient computer and wireless networks.

Distributed computing involves several processors working in concert to solve a problem. Some are chosen as leaders, collecting data from the other processors and passing it along. Organizing these networks into efficient processor-leader groups is one of the biggest challenges in computing — but millions of cells in a fly’s nervous system do it automatically, organizing themselves so that a small number of cells serve as leaders. It is much better than anything humans have come up with, scientists say: “It is such a simple and intuitive solution, I can’t believe we did not think of this 25 years ago,” according to co-author Noga Alon, a mathematician and computer scientist at Tel Aviv University and the Institute for Advanced Study in Princeton.

Fruit fly bristles, which are used for feeling and hearing, develop as nerve cells self-select to become leaders. The cells send chemical signals to their neighboring cells, ensuring that those cells cannot become leaders, too. Using fluorescence microscopy, the researchers watched an entire network form in about three hours.

They developed an algorithm based on the cells’ self-selection approach, and say it’s particularly effective for adaptive networks where the number and position of each node is not certain, according to Carnegie Mellon University. That could include environmental monitoring sensors, robot swarms and more.

The research is published today in the journal Science.