Our favorite gift guides, DIY decorations, and illustrated Santa Clauses from the past 138 holiday seasons 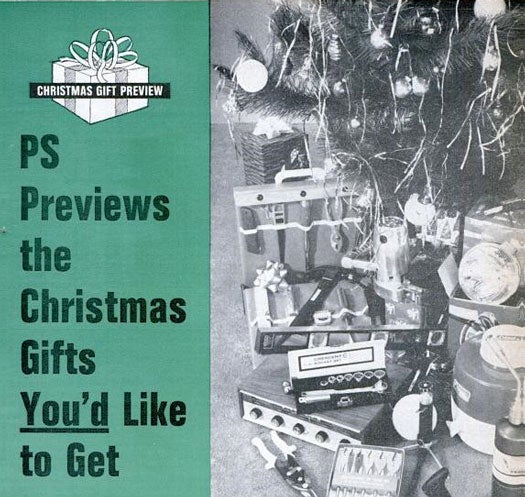 When it comes to writing wishlists, you often don't know what you want until you see it. Hence our publishing a massive gift guide for guys. "Here are some mouth-watering items chosen with you min mind," we said. "Just clip or underline them as a gentle hint--she'll appreciate it."(wink wink). The hottest items of '67 included: - A double-purpose timer that could count seconds and minutes! - Air horns that came with a two-pound cartridge of Freon - Outdoor speakers with waterproof cones. The left box contains the speaker, while the right box houses a "passive radiator" in time to the sound - Long-range, rechargeable battery-powered walkie talkie with a five-watt transmitter - A staple gun kit with 5,000 staples in four different sizes - A tape player/AM and FM radio set for his car - An insulated jug for picnics. Delightful! Read the full story in "PS Previews the Christmas Gifts You'd Like to Get".
SHARE

If there’s one thing our archives will attest to, it’s that times change, but the holiday spirit remains constant. For 138 years, the most wonderful time of the year arrived without fail, whether we were at war, in the midst of a Communist takeover, or mourning over failed space expeditions. That being said, we’ve compiled several of our favorite holiday DIY, how-to’s and gift guides from over the past hundred years. You’ll be surprised at what we put at the top of our wish lists just a few decades ago.

The 20th century began with a Christmas tree shortage, a phenomenon we could only attribute to “Santa’s stinginess in handing out real Christmas trees.” Being shop work enthusiasts, we suggested that readers make their own high-tech tree by boring holes into wooden poles, sticking decorated pine branches into those holes, and then mounting the structure onto a rotating wooden base.

Later that century, when cameras became more commonplace, we recommended that readers forgo store-bought cards to create their personalized holiday greetings out of family pictures–and so began a tradition we continue today, albeit with the aid of a Photoshop rather than the lightning techniques we describe in the article.

Of course, you can’t have the holidays without presents. One of our earliest Christmas gift guides, published in 1926, gave pointers on buying a radio. (Cone-type loudspeaker? Check. Matches the furniture? Check.) Elsewhere in our pages, we provided housewives with diagrams for eye-catching Christmas decor, such as snowflake-addled balloon-mobiles and a Styrofoam Santa lounging in a Model T.

Whether you need a little holiday cheer, or–like us–you simply enjoy looking at old stuff, click through our gallery for the best of PopSci’s retro holiday coverage. 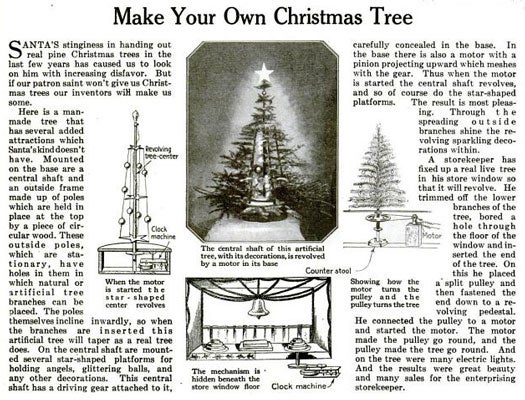 It was the year 1919, and the future of Christmas was in jeopardy.”Santa’s stinginess in handing out real pine Christmas trees in the last few years has caused us to look on him with increasing disfavor,” we wrote. “But if our patron saint won’t give us Christmas trees our inventors will make us some.” Families could make high-tech artificial trees in just a few easy steps. First, drill holes in wooden poles. Second, create a shaft out of the poles by binding them with a circular piece of wood. Install a clock machine into a wooden base, and once you’re done, mount the shaft onto the pedestal. Stick several tree branches into the holes, trim them with ornaments and lights, then switch on the driving gear. Ta-da, you have a revolving Christmas tree. Read the full story in “Make Your Own Christmas Tree” 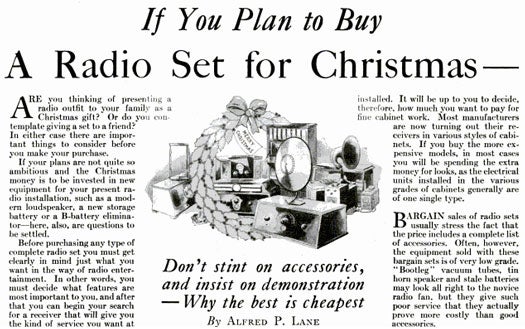 In the Christmas of 1926, everyone was hankering for a home radio set. To ensure that people go their money’s worth, we included several pointers for picking a good set. These include: 1) Don’t be duped by bargain sales for obsolete technology. 2) Test the tone quality. “In the early days of radio broadcasting, when all radio sets sounded like five-dollar phonographs, nobody worried about truthful reproduction,” we said, but clarity became paramount after people got over the early novelty of voice reproduction. 3) Select a radio that will blend in with your home furnishings. 4) Invest on quality accessories. Avoid package deals, as the batteries and vacuum tubes included with bargain radios are usually bootlegged or broken. Opt instead for expensive, but fresh B-batteries and high-quality cone-type loudspeakers worthy of a quality set. Read the full story in [“If You Plan to Buy a Radio Set for Christmas”](https://www.popsci.com/archive-viewer?id=CCoDAAAAMBAJ&pg=59&query=plan+buy+ra dio+set+christmas) 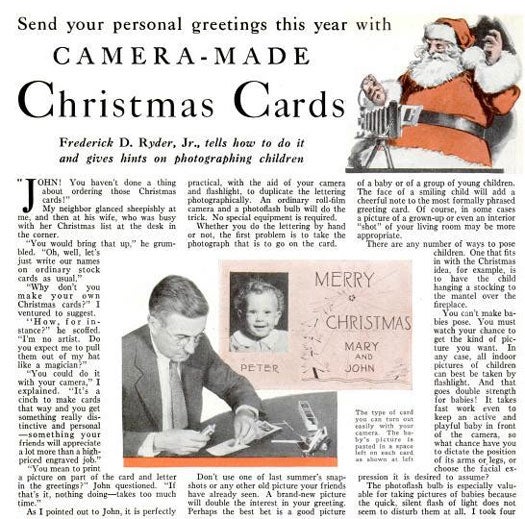 So you stink at drawing but you want to deliver personalized cards? Don’t worry, basic photography skills can compensate for a total lack of artistic talent. In this article, we provided budding photographers with tips for posing children and other adorable family members for greeting card photos. First, gather a group of kids. “The face of a smiling child will add a cheerful note to the most formally phrased greeting card,” we said. As them to do Christmas-y poses, like hanging a stocking over the fireplace. When taking candid shots of your baby, ring a bell to elicit a smile from him. To make the card itself, draw a design on a large sheet of paper. Tack up the drawing on a flat vertical surface, leaving three feet of space between your camera and the card. Photograph it using using double-coated film, develop the picture, and paste the picture of your child onto the front. Read the full story in “Camera-Made Christmas Cards” 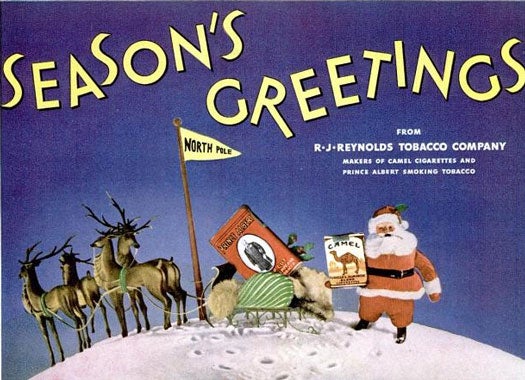 All right, we covered ads last week, but we can’t resist including this gem from a series of Christmas-themed Camels ads. “Fine tobacco for Christmas,” the ad says. “For more than a quarter of a century, the mellow fragrance of Prince Albert has been as much a part of Christmas as mistletoe and holly.” Others running that decade proclaimed Camels the most “acceptable gift in Santa’s whole bag.” “A gift of Camels says: ‘Happy Holidays AND Happy Smoking!'” Clearly, Santa’s elves were busying themselves with something other than children’s toys. Read the full story in “Season’s Greetings” 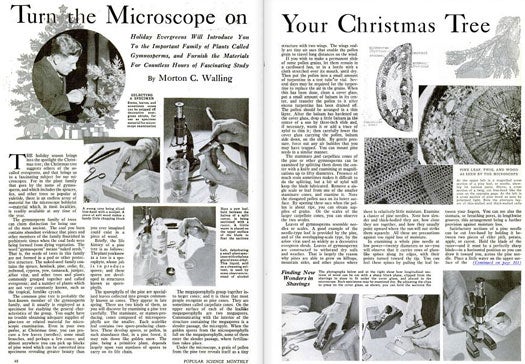 Most people throw out their Christmas trees after New Year. What a shame, considering what you can learn about botany from old pine needles! What better way to unwind after the holidays than by sectioning pine needles? We encouraged readers to collect a few pinecones and sprigs from their holiday boughs to educate themselves on the world of gymnosperms–that is, the plant family encompassing hemlock, pine, spruce, yew, cypress, and juniper, among other evergreens. Projects include creating slides out of pollen grain, which resembles a winged structure when under the microscope. With a small chopping block, a razor, and a scalpel you could also slice open young pine cones and yew leaves for a whole day’s worth of observation. Read the full story in “Turn the Microscope on Your Christmas Tree” 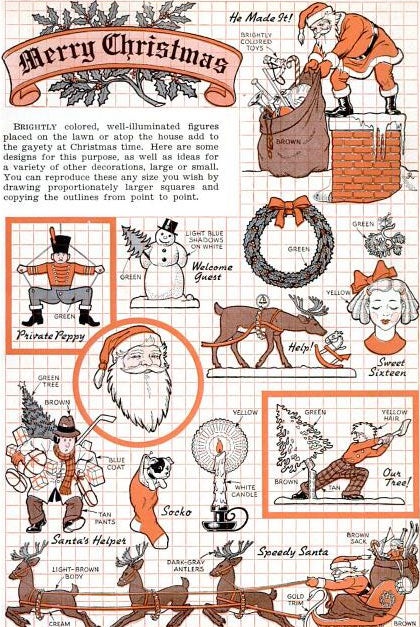 Nowadays, most people head to the nearest 99-cent store for decorations, but there’s something inherently charming about handmade decorations. While the measuring, cutting and gluing may take several hours, with the help of a guide like the one pictured here, the process needn’t be so meticulous. A couple of ideas not shown in this design board include cardboard Santa Claus bookends and a “balloon barrage,” which use helium balloons to suspend cut-out snowflakes from a ceiling. For ambiance lovers, we suggested throwing sodium compounds and dried newspapers infused with soda solution into the fireplace to achieve more dramatically-colored flames. Read the full story in “New Ideas for Your Christmas Decorations” 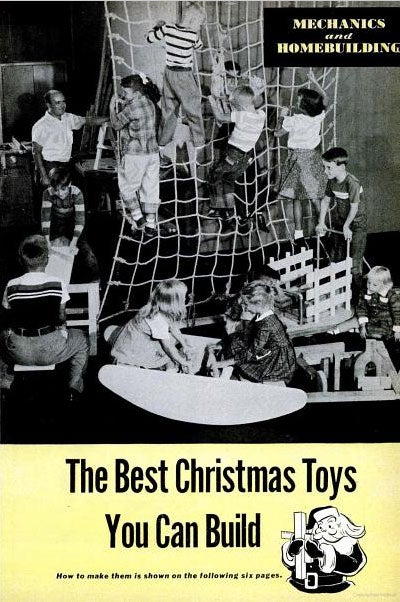 The Best Christmas Toys You Can Build: November 1953

Ahh, the days before children put Nintendo DS’s and iPods at the top of their Christmas wish list. This feature provided five pieces of play equipment that adults could easily make themselves. The first one, pictured left, is a cargo net which we promised would let children climb and jump safely. The second, a rocking boat that doubled as a practice stairway, is less dangerous than it sounds. With enough time and materials, doting dads could also construct a see-saw, giant building blocks, and a wooden wagon. Read the full story in “The Best Christmas Toys You Can Build” 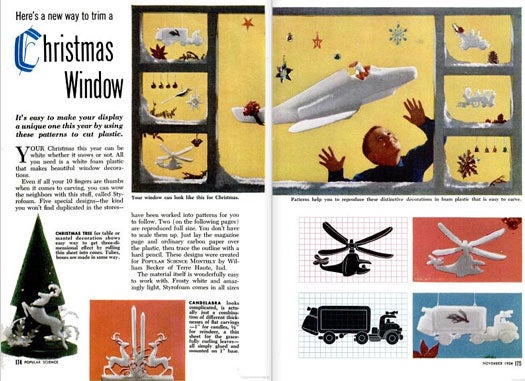 Shop work’s not for everyone, but creating homemade Christmas decorations became a cinch in the 1950’s after the advent of a now-ubiquitous invention: Styrofoam. “Even if all your 10 fingers are thumbs when it comes to carving, you can wow the neighbors with this stuff,” we said. “The material itself is wonderfully easy to work with. Frosty white and amazingly light, Styrofoam comes in all sizes.” Not only was Styrofoam easy to obtain, but it gave people living in warmer climates the chance to enjoy a proper winter wonderland. “Your Christmas this year can be white whether it snows or not. All you need is a white foam plastic that makes beautiful window decorations.” We included patterns for a candelabra, a helicopter, a pioneer locomotive, and Santa’s Model T. Read the full story in “Here’s a new way to trim a Christmas Window” 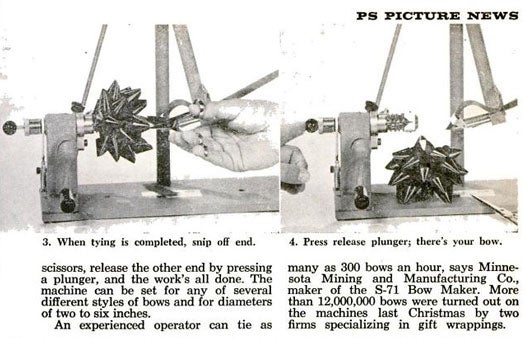 Not everyone, least of all department store staff, had time to hand-craft Christmas decor. In a short “how it works” article, we showcased the new S-71 Bow Maker released by the Minnesota Mining and Manufacturing Company. Using the mechanism was simple enough: first, thread the ribbon through guides in the machine. Attach one end to the pin and the other to a feed spring. Turn the crank and watch the ribbon form. Once it’s done, snip off the end. This machine could tie around 300 bows an hour in a variety of styles and sizes. Read the full story in “Machine that Ties Christmas Bows” 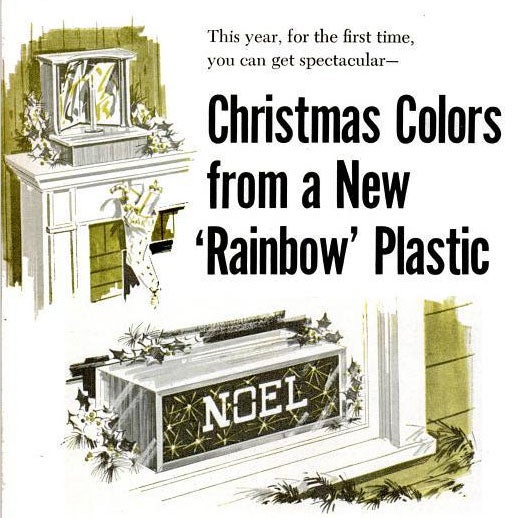 During the Seattle World’s Fair earlier that year, the Edmund Scientific Company introduced “rainbow plastic,” a substance that could defract white light to create colorful patterns against its surface. See that box with “Noel” written on it? Those star-shaped sparks come from white christmas lights within the container. Building a “galaxy box” using rainbow plastic was simple enough. After obtaining the plastic by mail order, insert two or three sheets inside a wooden box with a black interior. Add the lights, plug them in, and experience the magic of Christmas all over again. Read the full story in “Christmas Colors from a New ‘Rainbow’ Plastic”

When it comes to writing wishlists, you often don’t know what you want until you see it. Hence our publishing a massive gift guide for guys. “Here are some mouth-watering items chosen with you min mind,” we said. “Just clip or underline them as a gentle hint–she’ll appreciate it.”(wink wink). The hottest items of ’67 included: – A double-purpose timer that could count seconds and minutes! – Air horns that came with a two-pound cartridge of Freon – Outdoor speakers with waterproof cones. The left box contains the speaker, while the right box houses a “passive radiator” in time to the sound – Long-range, rechargeable battery-powered walkie talkie with a five-watt transmitter – A staple gun kit with 5,000 staples in four different sizes – A tape player/AM and FM radio set for his car – An insulated jug for picnics. Delightful! Read the full story in “PS Previews the Christmas Gifts You’d Like to Get”
archive gallery
archives
christmas
future then
Gadgets