The world’s first commercial effort at a patient-ready brain computer interface is on display over at CeBIT 2010, but don’t... 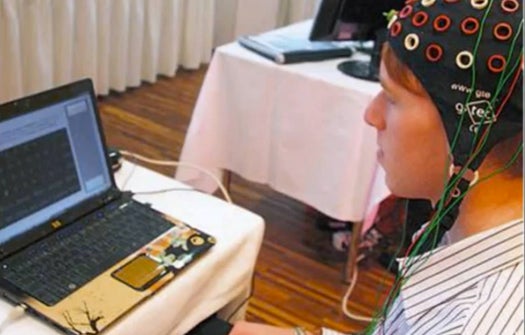 The world’s first commercial effort at a patient-ready brain computer interface is on display over at CeBIT 2010, but don’t go throwing out your keyboard and mouse just yet. Intended for patients suffering from locked-in syndrome and other communication-impairing conditions, the Intendix from Guger Technologies allows users to input text using only their brains.

Intendix works using an EEG-sensitive cap that measures brain activity that is focused in a particular way. You simply watch a grid of letters that flashes on the screen, focusing on the letter you want to type. When the letter you want lights up, your brainwaves jump ever so slightly, allowing the EEG to determine what to type. Guger Technologies claims that the interface is simple enough that users can utilize it relatively well after just ten minutes of training.

As the brain acclimates to the system, users can type as quickly as one letter per second, making it possible to carry on a conversation and communicate complex thoughts, a step above some of the more rudimentary communication systems that have been devised over past decades.

At more than $12,000 per unit, Intendix is a bit pricey for the BCI enthusiast simply interested in the technology, but the commercialization of the product does signal a new degree of accessibility to brain computer interfacing. It doesn’t appear we’re going to be mind-melding with our PCs anytime soon, but this certainly marks a small step in that direction.

Check out a vague yet visually interesting ad for Intendix below.