The OnePlus 10 Pro offers a beautiful display, premium design, and a feature-rich camera. But is that enough for a flagship phone? 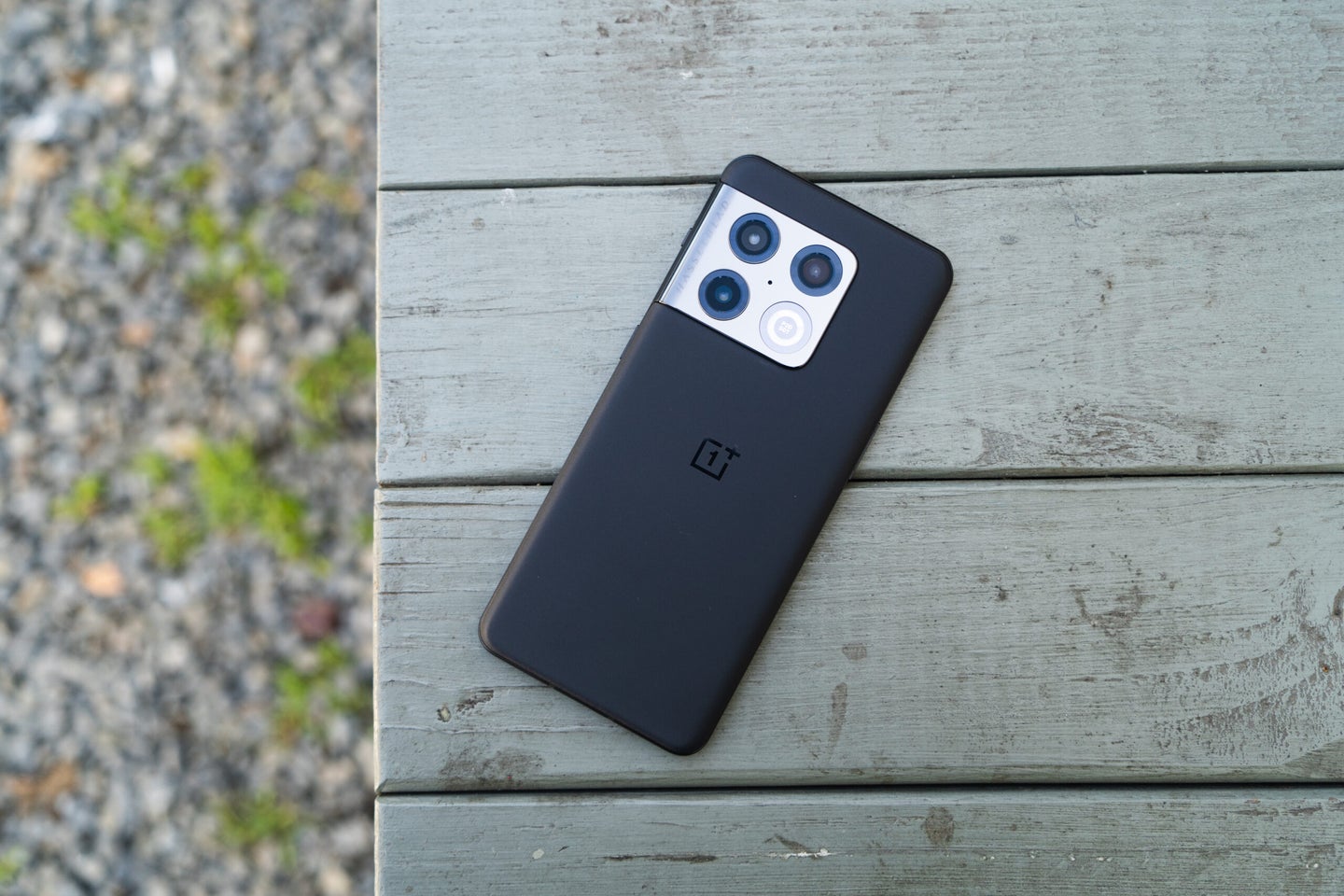 The OnePlus 10 Pro is here to remind you that flagship phones don’t have to cost a fortune. Coming off last year’s excellent OnePlus 9 Pro, the 10 Pro includes a beefier 5,000mAh battery, improved haptics, and a triple-camera setup developed in concert with Swedish camera brand Hasselblad. Its hardware design—a combo of glass and aluminum—feels every bit as elegant as other high-end smartphones. These features come together to create a high-quality experience that makes the OnePlus 10 Pro a great all-around Android device, especially given its sub-$1,000 price point.

What is the OnePlus 10 Pro smartphone?

We really liked the design, display, and camera on last year’s OnePlus flagship, and the OnePlus 10 Pro builds on that strong foundation. The 6.7-inch Fluid AMOLED display looks near perfect, at least to my eyes, thanks to features like dual-color calibration, which calibrates colors to two levels of brightness (100 nits and 500 nits), and a 120Hz refresh rate. The OnePlus 10 Pro brings even more camera features to the table, too. Its new ultra-wide lens offers a 150-degree field of view, and a RAW+ mode, which combines computational photography elements with more image editing flexibility.

The OnePlus 10 Pro includes the latest Qualcomm Snapdragon 8 Gen 1 processor, which you’ll find in a lot of top Android devices in 2022, alongside 8GB of RAM and 128GB of internal storage. OnePlus plans to release an upgraded version with 12GB of RAM and 256GB of storage at a later date. On the software side, the device features OxygenOS 12.1 based on Android 12, which doesn’t feel bloated and is endlessly customizable.

These specs, along with the software and updated features, position the OnePlus 10 Pro as a competitor to devices like Samsung’s Galaxy S22 Ultra and Google Pixel 6 Pro.

Last year’s OnePlus 9 Pro introduced a new design philosophy that seamlessly merged an aluminum frame with its rear glass panel and that’s carried over to the OnePlus 10 Pro. It’s a familiar, but gorgeous design with fit and finish worthy of its lofty competition. The aluminum frame gives it a pleasing sturdiness at 0.44 pounds, and the front and rear glass feature subtle curves that make the device comfortable to hold. It’s exactly what you want in a high-end device.

Historically, OnePlus Pro phones have been quite tall—the 10 Pro is 6.4 × 2.9 × 0.3 inches. Where past models felt top-heavy and awkward, though, this year’s model achieves a new sense of balance by aligning the weight distribution more to the center. As a result, the device nestles comfortably in your hand when you hold it.

On the left side of the phone is a volume rocker. The right side has a wake/power button and OnePlus’s famed three-stage ringer switch, which allows users to easily toggle between a ringer, vibration, and fully silent. It’s a very subtle, but helpful design tweak that I wish more phone-makers would adopt.

Speaking of vibration,  the OnePlus 10 has substantially stronger haptics. One of the criticisms aimed at the OnePlus 9 Pro was its weak vibration, which made it difficult to feel notifications buzzing. The 10 Pro’s new haptic motors are substantially stronger—”40 percent,” per OnePlus—and quieter. The changes are welcome and I never missed a notification while using the device.

The 6.7-inch, 3216 x 1440p screen looks immaculate thanks to its 525 pixel-per-inch density. You won’t notice individual pixels with your naked eyes (unless you’re Superman). It also features an upgraded LTPO (low-temperature polycrystalline oxide) display technology that reduces power consumption and supports a dynamic refresh rate. The phone can adjust the screen’s frame rate between 1-120Hz, depending on what you’re looking at.

To enhance the screen’s color accuracy, the screen features dual color calibration, which means its display has been calibrated for two brightness levels: 100 nits and 500 nits. OnePlus claims this produces more accurate colors when looking at the phone with the brightness set low. This is potentially a useful feature for photographers and creatives using the phone to edit images and video, but hard to judge for laymen. I keep auto-brightness on at all times and, to my eyes, colors look accurate and natural no matter the brightness of the display.

The OnePlus 10 Pro features a Snapdragon 8 Gen 1 processor, Qualcomm’s latest and greatest processor for Android phones. With 8GB of RAM, it has plenty of power for common tasks like watching videos, editing photos, or playing games. Having used the OnePlus 10 Pro for the past few weeks, I didn’t encounter a single slowdown. My daily usage is fairly tame: Checking Instagram, watching YouTube, web browsing, and some light photo editing. If that sounds like an average day for you, the OnePlus 10 Pro should more than meet your needs. I did put it through its paces a little more by watching a couple of episodes of Gilmore Girls on Netflix and editing photos, and the OnePlus 10 Pro didn’t break a sweat.

For gaming specifically, the 10 Pro has a “HyperBoost Gaming Engine,” software optimizations designed to reduce frame rate fluctuation and increase the syncing speed between the processor and display. These features are only supported by a handful of mobile titles, including PUBG Mobile, League of Legends: Wild Rift, and Genshin Impact. I booted into a few rounds of PUBG Mobile and while the device’s extra gaming features didn’t ensure a win, they did provide for a smooth, enjoyable experience. After all, this is Qualcomm’s top-end chip, so we wouldn’t expect any current app to tax it beyond its limits.

The OnePlus 10 Pro features a 5,000mAh battery, an upgrade from the 4,5000mAH in the 9 Pro. The battery gave me more than enough juice to get through a couple of days of moderate use on a single charge. The device supports 65W Supervooc wired charging, Oppo’s proprietary charging technology, which can fully revive the battery from 1% to 100% in just 34 minutes. That’s fast, and means I can charge up by the time I watch an episode of the aforementioned Gilmore Girls and endure the rest of the day. In a pinch, fast charging is a lifesaver. It also supports ultra-fast 50W Airvooc wireless charging, which will take you from 1% to 100% in 47 minutes.

While the internal specs are a big reason the OnePlus 10 Pro feels so nimble on its feet, OnePlus’s Oxygen operating system also plays its part. The device includes OxygenOS 12.1, based on Android 12, and it’s one of the cleaner manufacturer-based launchers I’ve used. It features several customization options—from changing screen transitions to grid layout. The software also includes handy additions requested by the community, such as different dark mode settings (enhanced, medium, and gentle). Overall, the OnePlus software is clean, unobtrusive, and light, making it easy to take advantage of the customization at the heart of Android.

This is the 2nd year that OnePlus teamed up with Hasselblad to deliver a powerful camera. Like the 9 Pro, the OnePlus 10 Pro again offers a triple camera setup—the primary, telephoto, and ultra-wide—that’s capable of shooting in full 10-bit color. This allows the camera to take advantage of the DCI-P3 color gamut, and offers 25% more color coverage than the sRGB color gamut found in other smartphones. OnePlus claims these features blend to exhibit more pleasing colors and reduced color banding, so there will be smoother transitions between colors in images.

The new ultra-wide camera captures photos with a 110-degree field of view by default, but you can switch it to a 150-degree field of view for capturing more of the scene. If you’re taking landscape photos, a wider lens is always more fun to use. The custom lens handles the distortion caused by the wide FOV well, but the images aren’t particularly sharp. The colors don’t look quite as accurate compared to the main sensor, but the difference isn’t drastic. It also supports a  digital “fisheye” mode that replicates the look of a distorted fisheye lens. It’s fun to make photos that look like old skate videos from the ’90s, but it is a bit of a bummer that it only works for images, not video.

The OnePlus 10 Pro also brings its Hasselblad Pro mode to all three rear cameras, which allows users to adjust settings, including ISO and white balance. You can also capture images in up to 12-bit RAW (DNG format) with a new feature called RAW+, which retains the OnePlus 10 Pro’s computational photography elements, such as dynamic range and noise reduction, while still providing users with plenty of post-processing control.

If you’re the type of person who enjoys editing RAW images, my guess is you already own a digital camera system that can take far better images than any smartphone. That’s not to say I don’t think that having access to RAW images on a mobile device isn’t ever useful, but I’d be curious to see how many people actually take advantage of these features, or even know they exist.

The OnePlus 10 Pro’s main sensor can record in 4K at up to 120 fps and in 8K at 24 fps. There are also some slow-motion modes, including 480 fps if you don’t mind shooting in 720p. I always appreciate features that allow me to slow down real life, and shooting at 480 fps is a lot of fun in situations, like when your dopey dog is trying to catch a water balloon. A 32MP sensor on the front of the phone offers a 27% wider field of view compared to last year’s OnePlus 9 series. I like when a front-facing camera is a little wider because it means I can get more of the scene on the rare occasion where I take a selfie.

The 10 Pro also adds more specific camera calibration to video with “Movie Mode,” which lets users adjust settings like ISO, shutter speed, and white balance. You can record in a LOG format without a pre-set picture profile, allowing you to color grade your footage in post-production. It’s nice to be given control over what footage looks like, and means the 10 Pro gives you the same kind of power offered by a more expensive digital camera.

Finally, the OnePlus 10 Pro camera system supports a portrait mode, dual-view video, focus peaking, cat & dog face focus, video nightscape, and an XPan mode. The latter mode carries on the heritage of Hasselblad’s legendary XPan 35mm camera and allows users to capture panoramic images. It’s a nice touch for those who are familiar with Hasselblad’s history and it’s a useful way to quickly take a panorama.

So, who should buy the OnePlus 10 Pro?

The OnePlus community will find a lot to like about the OnePlus 10 Pro. With a luxurious design, sharp display, and better battery life, it nails the fundamentals of a great Android phone. The camera system is also excellent, though maybe not a huge upgrade over last year’s model.

That said, none of its many incremental upgrades make a dramatic impression. If you own a OnePlus 9 Pro, or you’re a longtime Samsung Galaxy fan, there’s not quite enough here to demand you upgrade this year. Still, the OnePlus 10 Pro brings a lot to the table at a price that’s competitive with comparable smartphones. If you’re already on the market for an Android, it stands up with the Galaxy S22 as an early contender for the best phone of the year. OnePlus continues its thoughtful approach to software, which has always felt clean and light compared to the competition. And, at $899, it remains one of the most affordable flagship phones around.

When can I buy the OnePlus 10 Pro?

The OnePlus 10 Pro is available for pre-order now for $899 through oneplus.com and will be available at Amazon, Best Buy, and T-Mobile beginning April 14.