The third-generation Focusrite Scarlett 18i20 boasts the expandability of audio interfaces more than twice its price, making it a compelling choice for growing home studios. 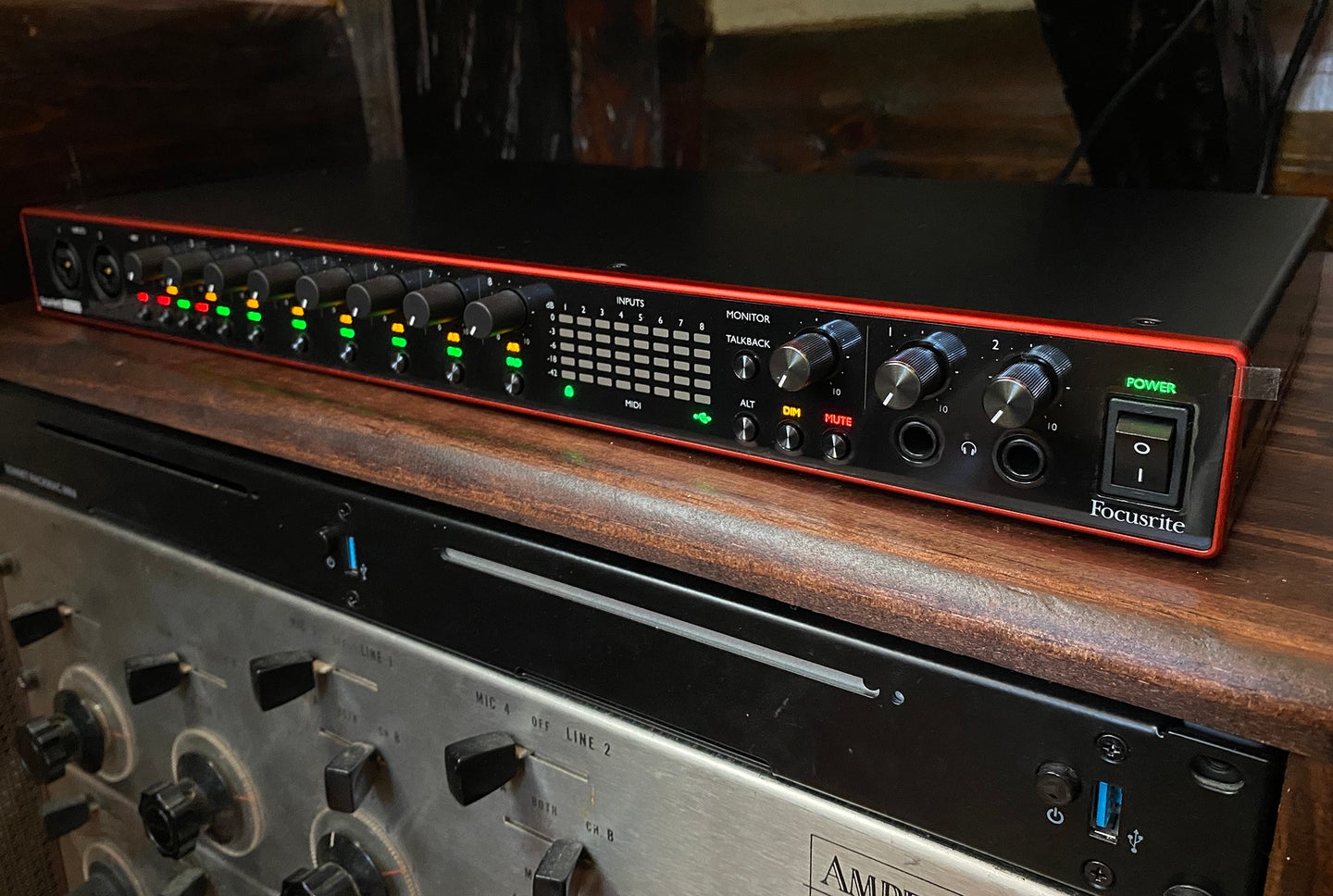 Pound for pound, the 18i20 holds its own against USB audio interfaces that cost significantly more. Jay Cabrera
SHARE

The Focusrite Scarlett 18i20 is a sleek and rather unassuming midrange audio interface that manages to offer premium features at a price point half of what its direct competitors ask. Weighing in at just 7.5 pounds and sporting an understated two-tone finish with streamlined knobs and buttons, the 18i20 sports eight microphone preamps and direct compatibility with production-level audio gear, among other highlights. This combination of feature set and value, along with its overall build quality, make the third-gen 18i20 a seriously appealing option for producers and musicians running newly expanding recording studios and working on a budget.

I recently had the opportunity to test a third-generation Scarlett 18i20 at my modest home studio by swapping it directly with my everyday recording interface, the Universal Audio Apollo x8. The two have a lot in common in terms of workflow and compatibility with external gear, but the Apollo x8 runs over double the cost of the 18i20. Thanks to their similar I/O configurations, I was able to make a fairly straightforward comparison of the two units and explore the 18i20’s ability to integrate with my studio’s existing workflow. While the 18i20 has a few shortcomings indicative of its midrange cost, it can perform at a high level and save you some money if you’re open to working around the Scarlett audio interface’s limitations.

The 18i20 is the largest of the six Scarlett-line Focusrite audio interfaces, the smallest of which (such as the third-generation Focusrite Scarlett 2i2) are some of the best portable USB-powered designs available today. The 18i20 features the same signature red-and-black chassis as its smaller siblings, but its power requirements and rackmount capability make it an audio recording interface much more suited for integration with permanent studio installations. It includes a single IEC power cable, as well as a USB-C cable for snug connection to any USB 2.0 or USB 3.0 port on Mac and Windows computers. Four low-profile rubber feet allow for slip-free use of the 18i20 on desk surfaces, or you can optionally take advantage of the two included rack ears for mounting in any 19-inch equipment rack.

While the third-generation Scarlett 18i20 bears much of the same connectivity and functionality as its predecessors, it features a major improvement in front panel materials and finish, particularly in its gain control knobs. Previous generations used plastic knobs that felt imprecise and offered little resistance, but they’ve been replaced by more robust metal knobs that offer “steps” for setting gain more reliably and consistently—giving a better impression of durability overall. The front panel also features a number of small, barely recessed buttons that give access to a variety of toggles including 48-volt phantom power and microphone/line switching. Accessing these functions via physical buttons is nice on paper, but they’re small and offer limited tactile feedback, which might pose a workflow obstacle if the 18i20 isn’t situated directly in front of you.

The Focusrite Scarlett 18i20 comes with eight of its own built-in inputs, two of which are accessible via the front panel via microphone/instrument combo connectors. The rear panel features six additional microphone inputs, as well as eight line inputs; users may connect line inputs and microphones concurrently and toggle between the two, but the interface is limited to eight inputs total. For access to the extra 10 inputs, you’ll need to bring your own ADAT- or S/PDIF-compatible equipment and connect it to the corresponding ports in the rear of the interface.

Getting started with the 18i20

The Scarlett 18i20 functions as a plug-and-play device on Mac and Windows computers without the need for extra drivers, but it does require users to download and install Focusrite’s control software to function as intended. The Focusrite Control program is absolutely mandatory if you want to access and change 18i20’s input and output routing options, but it also offers optional one-click toggles for some of the interface’s front panel controls without the need to reach over and press buttons manually. Compared to the streamlined, intuitive front panel of the 18i20 itself, Focusrite Control has a perplexing user interface that’s difficult to navigate and heavily reliant on text in a way that’s reminiscent of late-1990s web design. I found a quick read through the Focusrite Control user guide to be sufficiently illuminating, but it was still hard to parse exactly what the software could and couldn’t do.

I connected the Focusrite Scarlett 18i20 to my Mac Mini and other existing studio equipment via a combination of its microphone and line inputs, adding an additional eight from my Panasonic WZ-AD96M preamp by connecting via ADAT. This brought the 18i20’s working total to 16 inputs, which mirrors my studio’s everyday configuration using my Universal Audio Apollo x8. To ensure that the ADAT preamp and the 18i20 were properly synchronized, I also connected a single BNC cable from the 18i20’s world clock output to the clock input of my ADAT preamp. The entire connection and setup process was incredibly easy and straightforward and Logic Pro, my digital audio workstation of choice, recognized and received audio from all inputs without the need for any extra configuration. I imagine it would be equally simple no matter what you consider to be best DAW.

One major blow to the 18i20’s potential flexibility that reflects its midrange price point is its lack of dedicated converters for its two headphone outputs. Each pair of headphones connected to the interface’s front panel disables a pair of stereo outputs on the rear of the 18i20, which means that using two pairs of headphones will knock down the interface’s number of usable line outputs from eight to four. If you’re also using a pair of studio monitors, that number of usable line outputs goes down to just two. This might not be a big issue for smaller studios with fewer connectivity needs, but if flexibility is what you’re after, you’ll need to get creative and compromise.

The microphone preamps and converters on the Focusrite Scarlett 18i20 have very similar specs to those on my Apollo x8, with a comparable gain range of 56 dB and a maximum 24-bit/192 kHz AD/DA conversion rate. These stats more or less mean that the 18i20 is capable of recording at or above the industry standard for audio resolution at a level comparable to that of interfaces two, three, and even four times its price. While the technical reality is a bit more complicated than that, as all-in-one devices like the 18i20 often make technical compromises for the sake of saving space and cutting costs, the 18i20 should still have no trouble producing high-quality files that are up to industry spec.

Focusrite has upgraded the preamps on the Scarlett line for its third generation with all-new “Air” settings that aim to recreate the rich, open high-frequency response of the company’s standalone ISA preamps. The Air setting alters the signal before it reaches your DAW, so it’s a good idea to experiment with it before committing it to your recorded sound; sound; I found it to be a little crispy and harsh for my taste applied to drums and my voice, but it added some extra magic to my Casio synth and to distorted electric guitar in a very natural and organic way. For drums and vocals, I much preferred the 18i20’s preamps without the Air setting engaged; this rendered a relatively neutral-sounding recording with a bit of wooly low-end that was a nice departure from the brittleness commonly found in less expensive interface preamps.

Because I had the unique opportunity to make a direct A-to-B comparison of the 18i20 to my Apollo x8, it was easier than normal to perceive their subtle sonic differences. The 18i20 records at the same resolution as the Apollo x8, but its built-in preamps and converters render a recording of the same input material that might be described as sounding “smoother.” This is neither good nor bad; the recording captured by the Apollo x8 simply sounded more true-to-life in terms of sheer detail. The new “Air” setting on the 18i20 mitigated some of this veiling effect when engaged, adding a bit of presence and life back to particularly wooly instruments. On the whole, the differences in sound between the two are incredibly subtle—though the units have technical differences in terms of components, circuitry, and construction, none of that will remotely matter to the end listener if the material is enjoyable.

So, who should buy the Focusrite Scarlett 18i20?

Pound for pound, the Focusrite Scarlett 18i20 holds its own against USB audio interfaces that cost significantly more—an impressive feat of technology that would have been unheard of just a couple of decades ago. A combination of futureproof expandability, build quality, and industry-standard recording fidelity at a very accessible price point make it an excellent choice for users looking to leapfrog from a smaller interface to record large ensembles, full drum sets, and multiple simultaneous inputs without spending a fortune on a studio upgrade. The 18i20 isn’t completely flawless but, in my opinion, its limitations boil down to little more than learning opportunities for developing artists. Seasoned recordists may balk at its midrange converters or bristle at the notion of sacrificing line outputs for headphones, but engineering is little more than problem-solving and the shortcomings of the 18i20 are small fry. It does lack premium features like DSP, digital gain control, and advanced routing, but these features add significant cost—why they are typically found on high-end equipment. Bearing this in mind, as long as you’re not running a very large commercial studio nor require a very large I/O capacity, the Scarlett 18i20 absolutely deserves a spot on your shortlist of the best audio interfaces for the money.