But don’t throw away your MetroCard just yet Today, the Wall Street Journal released an interactive map of the bacteria in New York’s subway system. And as expected, it’s gross enough to make your skin crawl.

The map shows the culmination of a work by researchers at Weill Cornell Medical College, including geneticist Chris Mason (a 2014 Popular Science Brilliant 10 winner). Their study was published February 5 in the journal Cell Systems.

The researcher collected samples from all 466 Metropolitan Transit Authority stations to create the first genetic profile of a city’s transportation system. The project is part of a bigger effort to get a clear picture of life at the microscopic level, and researchers hope to use what they learned to better track down outbreaks, detect bioterrorism attempts, and combat antibiotic resistance.

By the numbers, the team tracked down more than 15,000 types of life forms. From that list, they identified 562 types of bacteria, 67 of which could be dangerous to humans. Luckily, these organisms were found in such small amounts that it wouldn’t be possible for a healthy human to pick up the disease.

New York’s subway system is by no means the cleanest place in the world; the MTA stations are known for their colorful smells, frequent rodent visitors, and discarded paraphernalia. A quote from the article sums them up perfectly:

The researchers were also limited in what they could compare their DNA samples to. The cockroach genome, for example, has yet to be mapped out, so they couldn’t identify samples that may have been related to the pest. They also ran into some false matches when doing computerized DNA comparisons, connecting some of their DNA samples to the DNA of Himalayan yaks and Mediterranean fruit flies (both of which have probably never traveled the New York City subway). This may be part of the reason why the New York City Department of Health and Mental Hygiene “strongly” disagrees with the study’s findings.

The takeaway message: You won’t catch the plague, or likely any other disease, from holding onto a metal pole on the train. But the results make for a fun interactive. For example, here’s the 33rd Street station local 6 station, near Popular Science’s office: 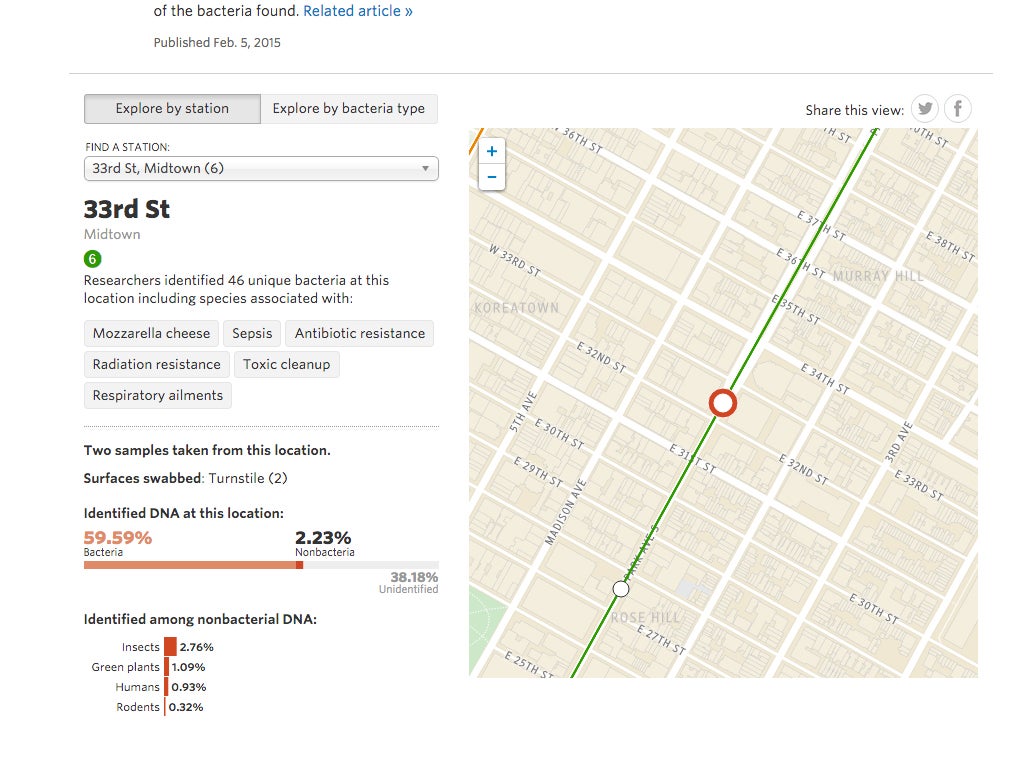 New Yorkers, check out what’s living in your station, and find out which stops were some of the worst offenders.