Bathrooms are gross, but so is everything. 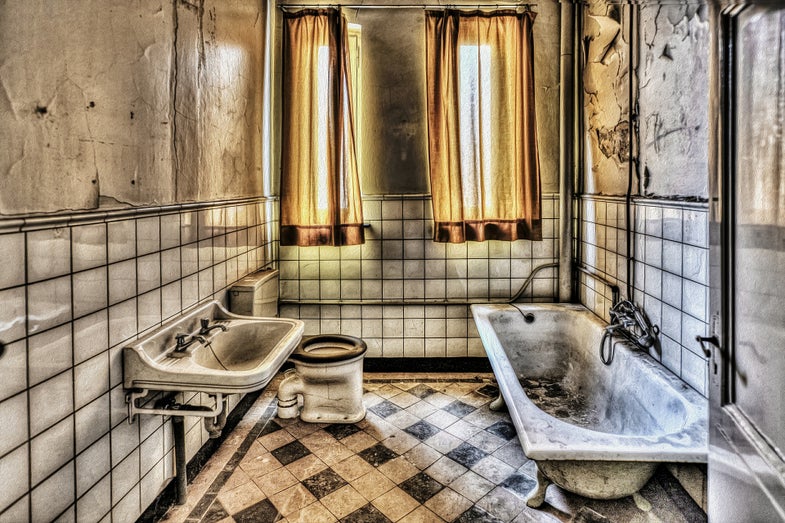 That’s right. While you’ve been freaking out over individual headlines suggesting that a tiny amount of fecal bacteria is lurking on your hands or faucets or what-have-you, those studies have been amassing into a whole body of research that shows pretty definitively that bacteria from our poop is absolutely everywhere. Here’s a short list of all the places scientists have found poop bacteria:

We could go on, but we won’t. You get the point: bacteria from poop is all around you all the time and there’s really nothing you can do about it. And why would you need to? It’s only a very small minority of bacteria—yes, even from your poop—that can make you physically ill. Lots of the organisms hanging out in your crap were just swept out from the inside of your intestines, where they’ve set up colonies that help you digest your food and regulate all kinds of bodily functions.

It’s nothing to be afraid of. We would be a pretty useless species if we got sick from every little microorganism that crossed our path. Even those bacteria that pose a potential threat are often neutralized by our immune systems. Most just never pose us any harm.

The reason “fecal bacteria” sounds so threatening is that plenty of legitimately awful, dangerous diseases spread via poop. Hepatitis, typhoid fever, cholera, norovirus, polio, E. coli, tape worms, giardia, rotavirus—they’ll all spread via the aptly named fecal-oral route. You don’t want to get any of these, which is why we’ve developed an evolutionary aversion to poop in general. It’s just better to stay away from it.

But just because some truly terrible illnesses spread via poop doesn’t mean that the bacteria we find all over everything are dangerous. They just happen to come from poop. Yes, you should wash your hands when you use the bathroom and yes, you can reduce the bacteria on your hands by using paper towels over hand dryers (jet dryers are better than standard ones, but worse than paper towels, according to this exhaustive literature review from the Mayo Clinic).

The fact remains, however, that poopy microorganisms are all around you all the time and there’s just not much you can do about that except to embrace them. They are the tiny pathogens that help bolster your immune system and create colonies of organisms that make your body the beautiful, diverse place that it is. Celebrate them! And wash your hands.