A relatively small cluster of genetic information, some of it dating to 60 million years ago, endows the staple fruit... 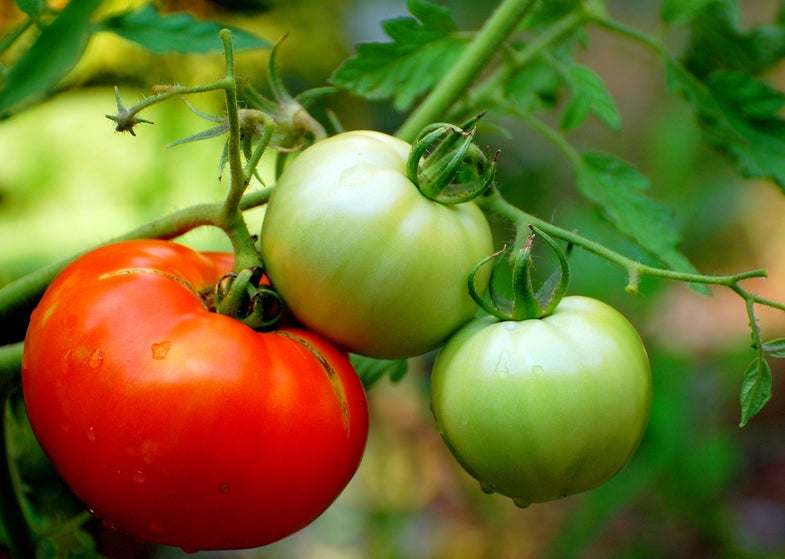 A relatively small cluster of genetic information, some of it dating to 60 million years ago, endows the staple fruit of summer with its taste and texture. The secrets of the tomato, star of summer gardens, salads and gazpacho, is now laid out for plant breeders and horticulturists in exacting detail.

Adding to a growing list of plant gene maps, the Tomato Genome Consortium today published genome sequences for two tomatoes: The “Heinz 1706” varietal, an inbred cultivar that serves as a model for the domesticated tomato, and its closest wild counterpart, Solanum pimpinellifolium. The nine-year effort provides the closest glimpse yet of the 35,000 genes and 12 chromosomes of tomatoes, and by extension the rest of their extended plant family. The two sequences also tell the story of tomato domestication, notably its initial cultivation in the Americas and the introduction of “pomo d’oro” to the Old World in the 16th century.

The sequences provide new insight into the genes responsible for tomatoes’ characteristic color, flavor and texture, and could give plant biologists a wealth of new genetic information to manipulate, either through breeding or otherwise. Tomatoes represent a $2 billion market in the United States, according to Cornell.

“Tomato genetics underlies the potential for improved taste every home gardener knows and every supermarket shopper desires,” says James Giovannoni, a scientist at the Boyce Thompson Institute for Plant Research, located on the campus of Cornell University, who led the U.S. sequencing team. “The genome sequence will help solve this and many other issues in tomato production and quality.”

Just last week, plant biotechnologists cracked the code of tomato taste, using statistical analysis of taste tests to isolate two dozen flavor compounds controlling sweetness and intensity. “We now know exactly what we need to do to fix the broken tomato,” said Harry Klee of the University of Florida.

Today, that’s truer than ever. The two tomato gene sequences suggest there’s not much difference between delicious, sumptuously sweet garden varieties and the sandy-fleshed red blobs found at the supermarket. The varieties have just 0.6% nucleotide divergence, or 5.4 million single nucleotide polymorphisms, differentiating them — so breeding desirable qualities back into domesticated cultivars may not require many revisions.

As an example, around 50 genes are involved in the construction of tomato cell walls during fruit development, a trait which has a major impact on the fruit’s texture. The several million SNPs could have boundless potential, serving as a new reservoir of tomato traits.

Beyond just improving the tomato, the new genome sequences provide scientists with a new system for studying its closest relatives in the night-shade family. So many of our food crops are direct tomato relatives, including the potato, pepper, petunia, tobacco and even coffee. The Tomato Consortium obtained some data from the Potato Genome Sequencing Consortium and compared the two plants, which are genetically only 8 percent different. And other fleshy fruits could benefit, too — melons, apples, strawberries and many more share characteristics with tomatoes. A tomato gene framework will allow for easier comparison of common and divergent plant gene sequences.

It will also be much easier for other scientists — and seed companies and plant breeders — to sequence different tomato varietals, by building on this genome scaffold.

The paper appears in the May 31 edition of Nature.