Prynt Wants To Be A Polaroid For The Smartphone Age 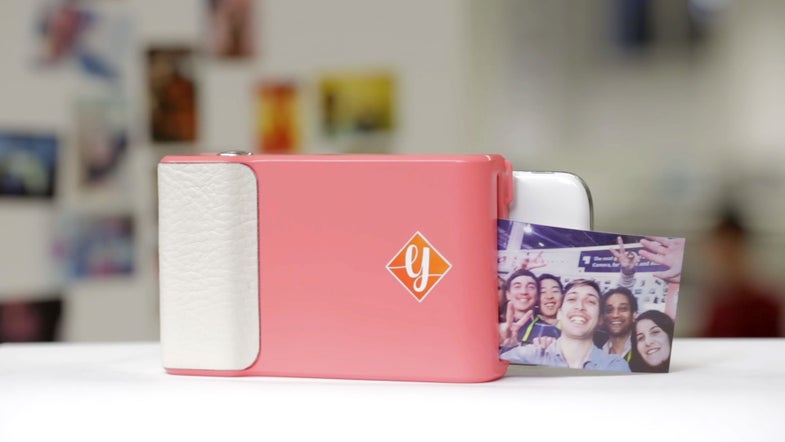 When I was a kid, Polaroid cameras were the height of technology: take a photo, it pops out of the camera, and then a minute or two later—with some optional shaking—you’ve got your picture in your hand. These days, all photos are essentially instantaneous, but one crowdfunded project wants to bring back the era of physical prints in your hand.

Prynt is a case that incorporates a little inkless photo printer and connects to your iPhone or Samsung Galaxy smartphone, thanks to a modular system that lets you swap out connectors. Pick a shot from your camera roll, or shoot it with the Prynt app, and you can instantly print out a two-by-three inch photo. Up to 10 pieces of paper fit in the case, which has a battery designed to let you print out 20 prints, each in about 30 seconds.

The printer works by applying heat to specially treated Zink paper. That has the added benefit of making the prints unlikely to smudge and resistant to water.

There’s also a nifty, if somewhat gimmicky, augmented reality feature. Take a video while you’re taking your photo, and Prynt can link the clip to your photo. Later on, when you point the app at the printed out version of the photo, it can play back the video on your phone, letting you relive the moment; and since the video is stored in the cloud, anybody you give the photo to can use the Prynt app to view it.

At a target price of $99, and $5 for a set of 10 pieces of paper, the Prynt isn’t actually too expensive (well, depending on how often you make prints, anyway). The major challenge is that, at 1.18 inches thick, the case is much bulkier than your smartphone—it’s more than four times the thickness of the 0.27-inch iPhone 6. This isn’t a case that you keep on your phone all the time, but rather one you’ll have to put on when you need it—which potentially means yet another gadget to carry around.

Fortunately, since you can print out any photo from your camera roll, you don’t have to use it in the moment. Still, I’d be worried that it’s the kind of thing that would be consigned a dusty drawer in my office after one or two uses.