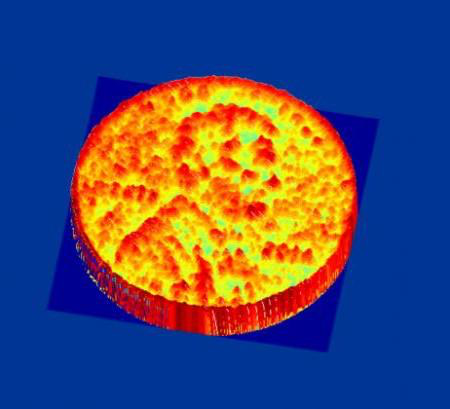 Taking 2D photos with your phone is rather popular these days, but thanks to Caltech scientists, soon you may be able to wave your phone at an object and capture a 3D scan of it. You could scan a particularly nice coffee cup, and then instantly send the 3D scan to a 3D printer and produce an exact copy.

The breakthrough is in making a 3D scanner small enough to fit inside a phone; existing systems are large and bulky. The Caltech team has developed a tiny silicon chip called a nanophotonic coherent imager (NCI), which uses an array of LIDAR sensors—sort of a laser-based radar—to determine the distance and size of the object, by measuring laser light reflected off the object. Amazingly, all of that technology fits into a chip that’s just a millimeter square in size, making it easy to embed in devices like smartphones.

Currently, the NCI boasts only a 4-by-4 array of LIDAR elements, so the scans are limited to just 16 pixels in resolution, though the team also developed a way to scan larger objects one 4-by-4 chunk at a time. This allows the scanner produce pretty detailed results, such as mapping the surface of a penny to the micron level from half a meter away. However, lead researcher Dr. Ali Hajimiri anticipates scaling the device up to much higher resolutions using larger arrays of the tiny LIDAR sensors. Given the rapid evolution of digital cameras and video cameras over the last two decades, it’s not hard to imagine that soon all our selfies will have depth.