With opioid overdoses on the rise, the U.S. should consider one proven safety measure: Giving people a safe place to do drugs

Safe injection sites work—why doesn’t the United States have them? 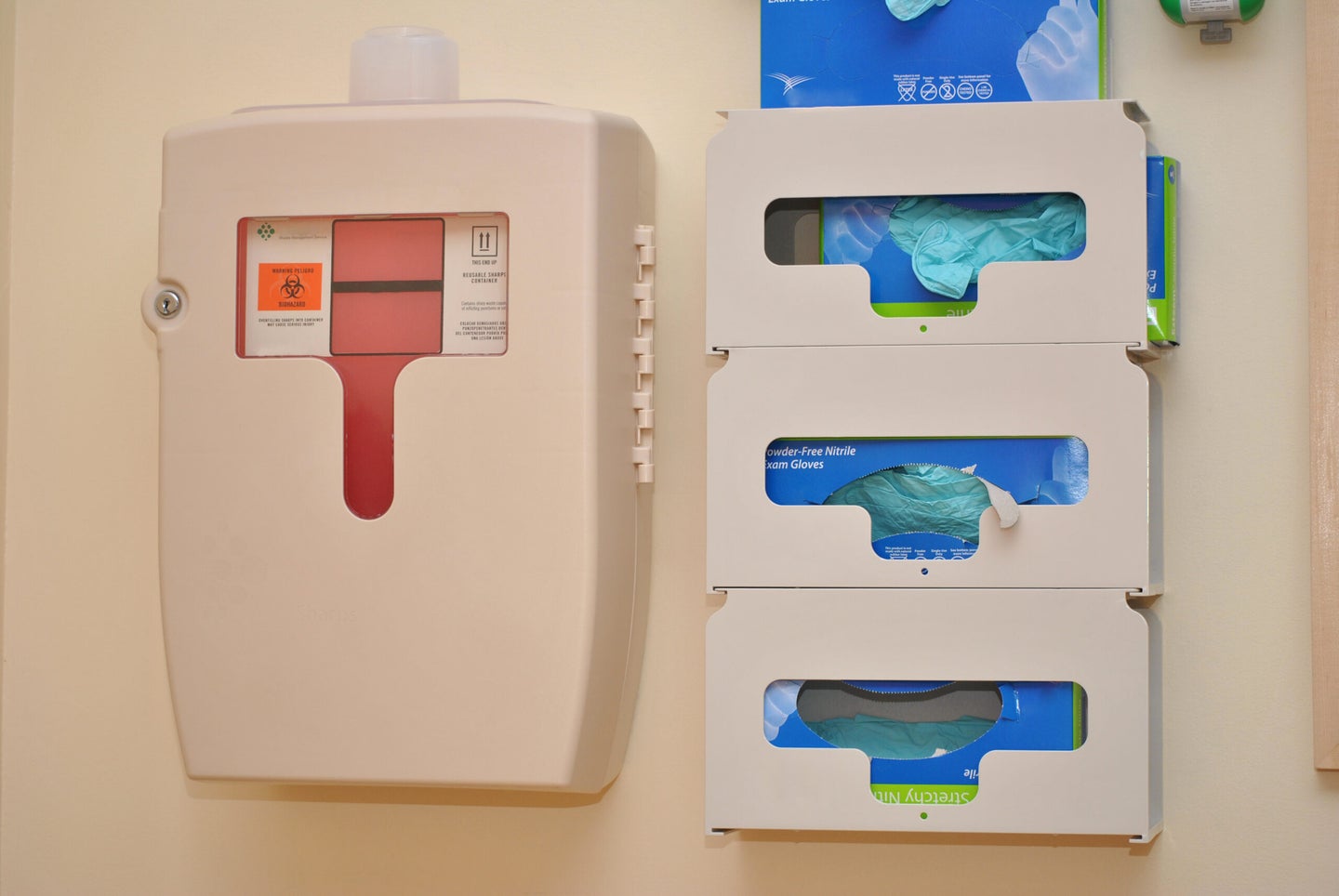 At safe injection sites, medical staff are on hand at all times to reverse overdoses or treat injection-related wounds like collapsed veins and soft tissue infections.
SHARE

Kensington, a Northeastern Philadelphia neighborhood is one of the largest East Coast narcotic markets for opioids. Walking down the area’s main street, Kensington Avenue, it is impossible to ignore the impact of opioids. Carelessly tossed syringes speckle the street and fleck the front steps of row homes. Narcotic dealers sell openly while users inject publicly. Regularly, a person is found immobile, presumably intoxicated by some combination of heroin and fentanyl. Meanwhile, parents walk their children home from school, careful to sidestep syringes.

“You can’t drive down the avenue without seeing 10 or 20 people just openly injecting,” says Bill Kinkle, a former opioid user now two years clean. He walks to work along this road, stopping to see if those sprawled out are breathing or turning blue—both signs of an overdose. He keeps multiple doses of naloxone—an overdose reversing medication—on him at all times. While Kinkle was born and raised in Kensington, his family recently moved to a nearby suburb due to crime in the area.

To describe the opioid epidemic as one of America’s greatest modern public health crises is no exaggeration. From 1999 to 2017, almost 400,000 Americans died due to opioid overdose. Thousands more contracted communicable diseases such as HIV or Hepatitis C (HCV) through needle-sharing—and the numbers do not appear to be dwindling. But with resurrecting drugs such as naloxone and proper injection practices, opioid addiction does not need to be a death sentence.

In an attempt to reduce opioid-related deaths, countries around the world operate safe injection sites. Sometimes referred to as safe consumption sites, these facilities provide drug users a space to inject their own illegal drugs, primarily opioids, under the supervision of medical staff. Despite the success of almost a hundred of these sites in Europe, Australia, and Canada, not one exists in the US. Stigma surrounding drug users, myths about addiction, and an unfolding legal battle prevent the first U.S. location from opening.

Evidence for the value of safe-injection sites is clear: Research shows that not only do deaths decrease in areas that surround these sites, but public health improves as sites provides sterile injection equipment to users and safely disposes of used syringes to curb needle-sharing. Some even provide fentanyl testing kits so consumers know the potency of their drugs; fentanyl can be lethal in doses as small as 0.25 milligrams. Most importantly, medical staff is on hand at all times to reverse overdoses or treat injection-related wounds like collapsed veins and soft tissue infections.

Safe injection sites do more than prevent or reverse overdoses. Most offer medication-assisted treatment (the gold standard in opioid addiction therapy) as well as referrals to a variety of services such as housing opportunities, legal services, and social workers. They also act as a bridge, reconnecting drug users with social and public health services.

“The primary mission is to save lives and to prevent people from dying, but a close secondary mission would be the long-term effects of helping people into recovery,” says Kinkle, who works at Pathways to Housing, a nonprofit that provides services to those suffering from chronic homelessness, while he waits to get his nursing registration back—he lost it while using. “By building long term relationships with drug users, they don’t feel embarrassed or judged. They feel like a human being.”

Safe injection sites are not a new solution to the opioid epidemic—they have been around for almost 30 years. The earliest sites opened in Europe during the 1990s when the rapid spread of HIV/AIDs was linked to heroin use. Now there are almost 120 operating sites worldwide, 78 of which are in Europe alone.

In 2003, North America’s first safe injection site, Insite, opened its doors. Located in Vancouver, Canada, Insite also happens to be one of the most rigorously assessed opioid consumption locations. Since its opening in 2003, it has supervised almost four million injections, responded to 6,440 overdoses, and witnessed zero deaths.

During its first three years of operation, Insite saw 46 percent of its users enter drug treatment and a 35 percent reduction in overall mortality within 500 meters of the facility (other parts of Vancouver only saw a nine percent reduction). According to Mark Townsend, the founder of Insite, those who injected at the center engaged in less needle-sharing, resulting in lower rates of HCV, HIV, and bacterial infections. All of this lifted the financial burden on taxpayers who cover additional medical costs associated with opioid-related deaths and disease.

Additionally, recorded sighting of public drug injections, publicly discarded syringes, and other pieces of injection-related litter all decreased in surrounding Vancouver neighborhoods. The police department also found that Insite had no effect on criminal or drug trafficking activity.

Australia saw similar results after the country opened its first safe injection site in Sydney in 2001. As of 2015, the facility oversaw almost one million injections and managed more than 5,925 overdoses without a single fatality. The surrounding neighborhood saw no increase in crime, an 80 percent reduction in ambulance calls, and the number of publicly discarded needles halved.

“The evidence of safe consumption sites was researched years ago in Europe, and we replicated those studies. You don’t have to keep studying this. At some point, you just need to open the sites because too many people are dying,” says Townsend, the frustration in his voice reaching a crescendo. He left Insite years ago to move to the US in the hopes of opening locations here. “And that’s my question of, why? Why are there none here?”

In short: the “Crack House” Statute. Enacted by Congress as part of the Anti-Drug Abuse Act of 1986, the statute was established during the moral panic surrounding crack cocaine. Initially, it was designed to prevent property owners from allowing their homes to become sites of illegal drug use and trade by making it a felony to knowingly rent, open, or maintain such a place. Now, the U.S. Justice Department is using it as leverage to sue organizations hoping to open safe injection sites.

In February 2019, the U.S. Attorney for the Eastern District of Pennsylvania, William McSwain, filed a civil lawsuit against Safehouse, a Philadelphia nonprofit seeking to open the first safe injection site in the country. McSwain, who was nominated by President Trump for his position in 2017, asked a federal court to declare the site illegal under the “Crack House” statute. However, on October 2, 2019, the federal court ruled in favor of Safehouse stating, stating that “the ultimate goal of Safehouse’s proposed operation is to reduce drug use, not facilitate it.” The Justice Department has not filed an appeal yet, but vows to do so.

In an October 11 letter to Ilana H. Eisenstein, the attorney for Safehouse, McSwain wrote: “Such a site would not only be a haven for drug use, but also a magnet for drug traffickers, who would be encouraged to prey upon users and would likely lead to increased criminal activity in areas around the site.” Yet no scientific evidence supports any of these ideas, including that a safe injection site increases criminal activity. “If you and your clients instead choose to move forward [with opening a site],” he concluded, “then you will force my hand and I will have no choice but to take the steps necessary to maintain the status quo.”

For Philadelphia, the status quo is 1,200 people dying of overdose a year.

But the city is not alone in its desperate search for a solution to the national epidemic. According to the White House website, the Trump Administration has “applied an all-of-Government approach to the epidemic” and “is helping those struggling with addiction through evidence-based treatment and recovery support services.”

“I would say that arresting people for individual drug possession, taking them into custody where they can’t be provided with treatment, and releasing them with increased risk of fatality isn’t an evidence-based approach to address the epidemic,” says Ronda Goldfein, the vice president and secretary of Safehouse.

While abusing opioids for three-and-a-half years, Kinkle went from being at the top of his career—a nurse at the University of Pennsylvania’s Emergency Room who just published a practice-changing paper—to being arrested for forging a check while homeless. He spent six months in jail where he was forced into withdrawal. Drug users develop a physical dependence on opioids, and withdrawal can result in symptoms such as severe body aches, cold sweats, and uncontrollable diarrhea. According to Kinkle, the jail provided no medical assistance or mental health services.

While safe injection sites are proven to reduce overdose deaths, they will not single-handedly stop the opioid epidemic. Increasing access to medication-assisted treatment, educating healthcare providers on the dangers of opioids, and properly prescribing opioid painkillers are other measures that will help resolve the crisis. But, safe injection sites are one important component of the solution—a component the United States government is overlooking, citing the lack of scientific evidence. But there is evidence, and that evidence is clear.

“At least once a week I get a phone call saying a friend of mine died from overdose. I am really tired of those phone calls. I am really tired of reversing overdoses all day long. I just want people to have their lives back,” says Kinkle. Behind him there are photos of him, his wife, and their three children. Words like hope, love, and cherished decorate the wall behind his couch. “Safe injection sites work in places all over the world. We should have one here.”