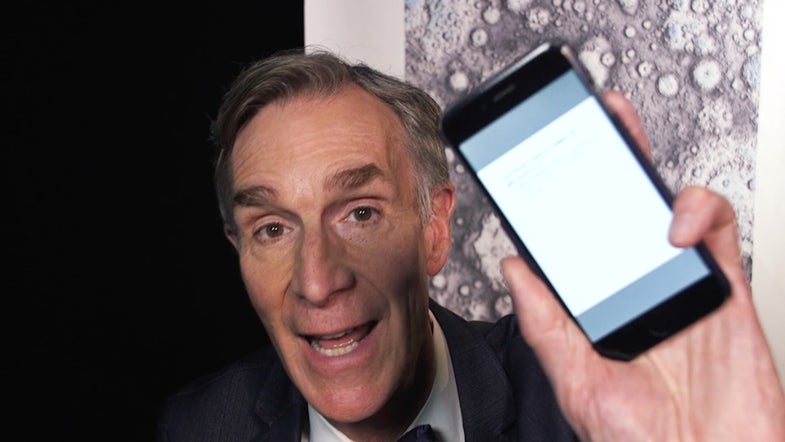 Bill Nye has been educating the public about science for over 20 years. In fact, a new documentary about him, Bill Nye: Science Guy, is out now (there’s a clip below). Nye stopped by PopSci HQ earlier this week, and responded to anti-science tweets with, well, science. Watch the video above or read on for select responses.

I’m not sure with evolution, if you’d have wings. Your bones are too heavy. You’ve got to have hollow bones, feathers. You have to make some changes. That branch in the evolutionary tree, cladistics, you’ve missed that branch. If there’s reincarnation for you, come back as a bird, way to go. But if you don’t come back I’m okay with that. Really.

If there’s a lecture about evolution, I hope you’ll expect that. He goes on to say, “You” meaning I, the reader, “may be an ape, but I am not.” Well, it depends what you mean by an ape. We all have ancestors that were very ape-like, but they were before we had bonobos, chimpanzees, apes, gibbons, all those guys. There was a pre-primate that you and I were descended from—even if you don’t believe in it. The rest of us know that you are descended from it. And reading this, maybe you did miss a turn. Maybe you’re not as intellectually capable as everyone else. There’s some evidence for that. [holds up phone and laughs]

Humans actually now move more rock and soil than mother nature does. And we have affected the chemistry of the atmosphere very, very fast. Nature would change a few dozen parts per million over a few millennia. Humans have changed it 30 parts per million over the past two and a half centuries. No, humans had to have a huge effect on the Earth—not only its atmosphere, but actually the soil and rock itself. So while you think it’s arrogant, actually you’re mistaken. Humans are changing the climate. I’m sorry you’re working so hard to deny that.

Scientific journals are written to be accurate, and reviewable by peers. It’s not a comic strip, generally. They take thought and effort to understand. Show some hustle, okay.

I understand this is a pun about protractors, things use to measure angles. But understand that farming is science. Farmers embrace science constantly, continually. That’s why farmers want to buy next year’s seeds, they want to use the latest and greatest seeds. They want to use the right pesticides, without wasting money. They don’t want to overtreat, they don’t want to undertreat, they don’t want to waste fertilizers. It’s science. May I remind you, as much as you like this pun, you rely on farms. Farming is not natural. If you stop farming, it goes back to some natural ecosystem.

I don’t know what they’re talking about, but I’m sure they’re cherry-picking some data from some place where the temperature was surprisingly cold. Hey Breitbart, you’re dead wrong, and you’re going to kill a lot of us through your dingbatical-ness. Yeah, you heard me. You’re leaving the world worse than you found it.

Watch an exclusive clip from Bill Nye: Science Guy below.