Now Robots Can Be 3D Printed With Customized Shock Absorbers 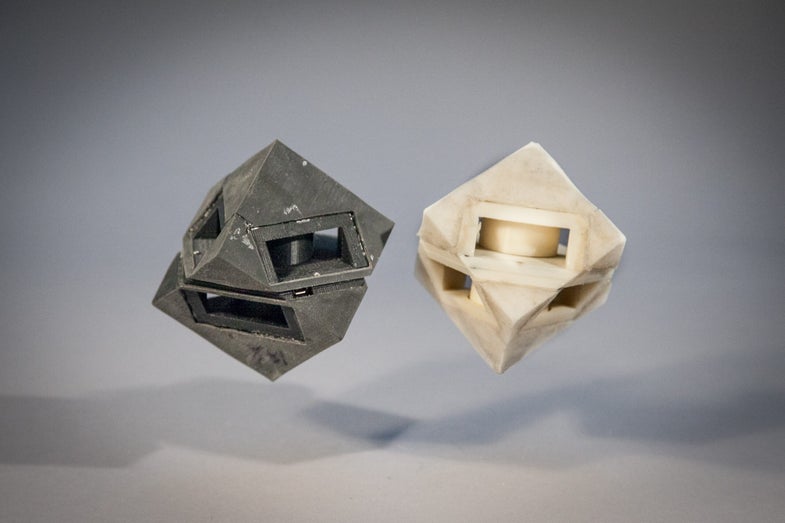 When we last saw the autonomous cube robots from MIT’s MIT Computer Science and Artificial Intelligence Laboratory (CSAIL), they were bouncing happily along in a silicone shell like pieces of tofu fleeing from a plate.

Being bouncy is fine for a cube bot that’s only designated to move along the ground. However, once those bots start carrying more breakable things, like cameras or sensors, the bot’s bouncy personality can become a problem.

Now, the researchers are back, with a less bouncy, more precise shell that has been customized to the task at hand.

The new exterior of these devices has been 3D printed using of three different materials: a solid, a liquid, and a rubbery substance called TangoBlack+ that is often used in 3D printing. By combining the three materials in different proportions, the researchers can make materials that are either more or less bouncy depending on the desired application.

The possibilities for this manufacturing method aren’t just limited to the cute cube bots. The researchers who designed the method hope that the shock absorbing material could be used to create better shock absorbers for delivery drones, shock-resistant shoe soles, and even helmets.

“Being able to program different regions of an object has important implications for things like helmets,” Robert MacCurdy, one of the study’s lead authors said. “You could have certain parts made of materials that are comfortable for your head to rest on, and other shock-absorbing materials for the sections that are most likely to be impacted in a collision.”