This Italian Robot Wants To Be Kicked 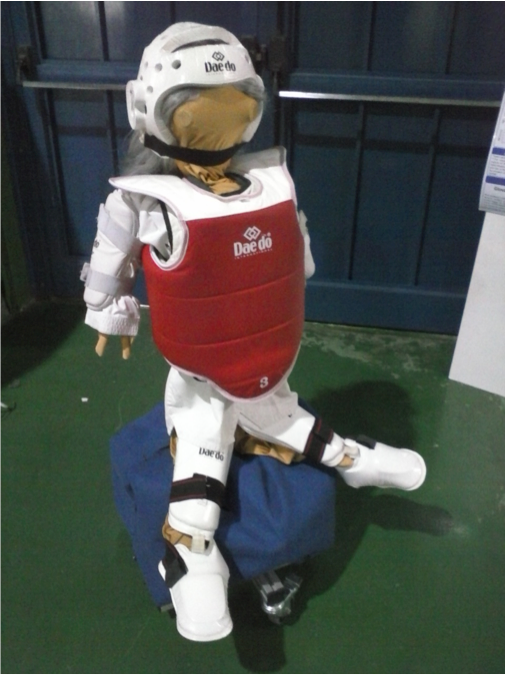 If the robot rebellion ever happens, it’ll be because we’re always bullying our machines. But a robot named Taekwondo Personal Trainer (TPT) is actually designed to be kicked.

Martial arts students usually practice on stationary, lifeless punching bags, or else potentially pull their punches while working with a human trainer. In a recent issue of Robotics and Autonomous Systems, two roboticists from the Italian company Humanot SRL, which has filed a patent on the technology, write that TPT could offer another option.

“When a personal trainer teaches a martial art, he transfers postures to the athlete which can be voluntary or involuntary, good or bad, static or dynamic,” Giovanni Muscolo, one of the study authors and co-founder of Humanot, explained to Popular Science in an email.

“Using a robot, the personal trainer can give to his athlete only good inputs, avoiding the transmission of errors.” Those errors could include improper placement of the legs or bad posture.

By contrast, TPT has no posture, or legs. The wheeled robot can be remotely operated, and has tactile sensors to count the number and speed of kicks and punches it receives on pads located in the same areas on the human body that would be valid targets during taekwondo competitions. TPT also gives acoustic feedback as well as visual feedback via LED-lit eyes.

Being armless, the robot can’t attempt to block hits the way a human could, but TPT could still prove to be a useful training tool.

The Italian Taekwondo Sporting Clubs specifically requested such a robot, although TPT could also be used to train other types of martial artists, the authors note.

Early prototypes are geared toward training children in competition taekwondo.

Muscolo, who is himself experienced in taekwondo and several types of kung fu, says the robot is low cost, and although the prototype version is designed for kids, it could easily be adapted for adults and professionals.

Future models of TPT could include camera systems that estimate the human athlete’s trajectories. The researchers also want to make it more autonomous in its interactions with people.