This New, Ultra-Detailed Map Of The Brain Could Change Medicine 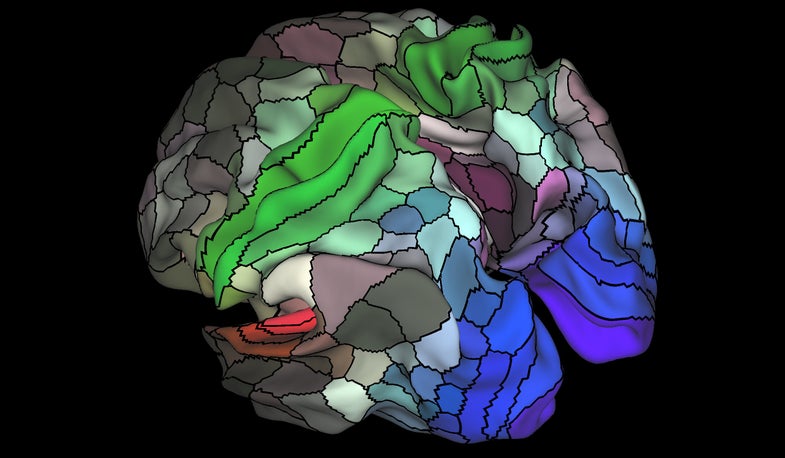 A group of researchers have developed a new map of the cerebral cortex of the human brain, revealing 100 new distinct regions in each hemisphere. Representing the most detailed map of the brain yet, it’s an achievement of a longstanding goal, and researchers say it will provide a crucial tool to understand how differences in even extremely small brain regions relate to behavior and disease.

The human cerebral cortex represents the outermost region of the brain and is involved in complex functions by helping us to use our muscles, process incoming senses as well as to understand language and process logical reasoning. These abilities of the cerebral cortex are present in some other mammals, but the advanced abilities of ours are part of what distinguishes us and makes us human.

Attempts at creating maps of the cerebral cortex have in the past relied on just one type of imaging, like an MRI, and have included data from only a small number of individuals. For this new map, researchers at Washington University in Saint Louis used a combination different imaging techniques and large number of people–210 healthy young adults–to create a detailed map of the cortex, as seen in the images below. Their work was published today in the journal Nature.

“The situation is analogous to astronomy where ground-based telescopes produced relatively blurry images of the sky before the advent of adaptive optics and space telescopes,” Matthew Glasser, a neuroscientist and lead author of the study said in the National Institutes of Health press release that accompanied the Nature article.

The new map includes 360 distinct regions within the cerebral cortex — 180 for each hemisphere. Previously, researchers had identified 80 regions in each hemisphere and with this new method, 100 were added, making the grand total 360.

In an accompanying news and views article, neuroscientists B.T. Thomas Yeo from the National University of Singapore, and Simon B. Eickhoff from Heinrich-Heine University in Germany argue that this new map represents a major advancement in the field of neuroscience. “[The] atlas is the first multimodal map targeted at defining cortical areas, and therefore represents a major advance in human brain mapping.”

What makes it different than any previous attempts before it is that the map pulls together information from three different brain-mapping techniques: A task-based fMRI, which tells what areas relate to what function; a map of myelin, which makes up the cerebral cortex and gives information about the architecture of certain areas; and a resting-state fMRI, which provides information on how neurons within and between different regions talk to one another. They then trained a machine-learning classifier (a type of computer program) to recognize the distinct “fingerprint”, as they call it, of each region ​within the cerebral cortex.

Through all of this, they were able to differentiate specific regions by how they relate to sensory and motor inputs and processing. For example, in the above image, regions in red are involved in hearing processing, while regions in blue are related to vision.

How will this help us understand the brain?

As the researchers point out in the paper, a more comprehensive grasp of what brain regions are involved in what functions will allow us to study how differences–including their shape, location, and size–of specific brain regions relate to certain behaviors and genetics.

For example, if a person has a learning disability, this map may allow doctors and researchers to better understand what area of the brain is different compared to someone without this learning disability. It may also give surgeons a noninvasive way to achieve a detailed and individualized map of the person’s brain on which they are planning to operate.

The new map may even provide a deeper understanding of how our brains evolved.

From the paper: “Comparisons with nonhuman primates, including marmosets and macaques (both widely used in invasive studies), and great apes, may yield new insights regarding the emergence of new cortical areas and the divergences in areal functions, which collectively led to the cognitive capabilities that make us uniquely human as a species and as individuals.”