Even moderate drinking might be bad for your brain 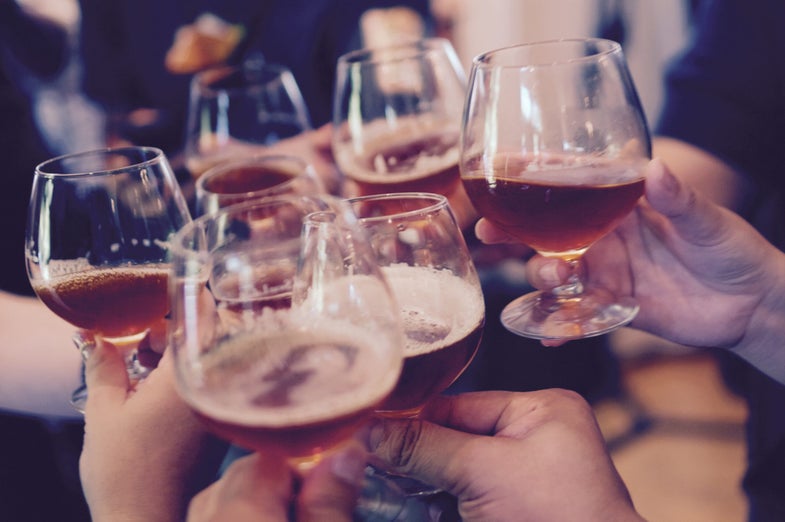 Binge and excessive drinking almost always get a bad rap—and for good reason. Heavy alcohol consumption is known to lead to a multitude of problems, including poor brain health. But the effects of moderate drinking on a person’s cognitive abilities have gotten less attention. In a study out this week in the British Medical Journal (BMJ), researchers following the brain health of 550 individuals found that subjects who were considered moderate drinkers—those who drank five glasses of wine or four pints of beer a week—showed a reduction in the volume of their hippocampi, an area of the brain associated with memory and learning.

While previous studies have clearly shown the negative health effects of excessive drinking, scientists know much less about the potential consequences of moderate indulgence. As such, most people consider this level of drinking to be normal—or at least not extremely harmful—and don’t think much of it. In fact, some studies have even led the public to believe that drinking in moderation can be beneficial to one’s health. But the jury is far from out on this, and the few studies that have looked at moderate drinking and overall health have been limited and fairly inconsistent.

In this study, the researchers narrowed their focus onto the effect moderate drinking can have on brain structure and memory. The researchers pulled 550 men and women who were participating in a longitudinal health study in the United Kingdom. They analyzed the brain scans of those individuals and took into account factors that could influence the results like age and smoking, as well as a history of other diseases. With 30 years worth of data, the researchers found that an increase in alcohol consumption was associated with a greater chance of developing something called hippocampal atrophy, which is damage to the hippocampus, an area involved in memory as well as spatial navigation.

As suspected, excessive drinking did indeed cause the greatest amount of brain damage. But those who drank moderately were still three times more likely to develop damage to those brain structures than subjects who didn’t drink at all.

Does this mean that anyone who has a few drinks a week is at risk for brain damage? Not necessarily. This was an observational study—researchers didn’t run a controlled experiment, instead relying on data collected as patients went about their normal lives. While they did weigh in other factors that could have influenced brain health, it’s impossible to take everything into account. Scientists will need additional data from past and future studies to get a clear picture of the longterm effects of all types of alcohol consumption on our overall health.

However, these results are a reminder that alcohol—even in amounts that are considered benign in our culture today—is technically toxic, and could take its toll. As Killian Welch, a neuropsychiatrist at the Royal Edinburgh Hospital, points out in an accompanying editorial: “with increasing longevity, maintenance of brain health into older age is the key priority of our time…Alcohol can be the primary cause of cognitive impairment in some individuals, but it is a likely contributor to cognitive decline in many more.”

So is any amount of alcohol truly safe? A single unit of alcohol a day (less than a half a glass of wine) was associated with the lowest risk of dementia, and other negative effects on health. But as Welch points out, contrary to some popular beliefs, the study indicated that those relatively safe sips of alcohol had no significant health benefits. “With publication of this paper,” he writes, “justification of ‘moderate’ drinking on the ground of brain health becomes a little harder.”