In the dark and chatty world of avatars and assumed identities, this cybercop is a virtual Sybil, trolling for creeps and thieves.

August 14, 2003: On the night of the great blackout, as the last waves of New York City workers walked over East River bridges and those with no way home settled down to sleep in lobbies or on sidewalks, a faint computer glow emanated from an 11th-floor window of One Police Plaza in downtown Manhattan. The light was barely noticeable, filtered as it was through the smoked-glass door of a tiny room that is nestled like a matrioshka doll inside the larger space that houses the NYPD’s computer-crime squad.

If you’d followed the light to the door and stood outside it on that remarkable night, you would have heard the tapping of a keyboard, the periodic sound of a wheeled office chair moving about within the small room, and the occasional mutter. If you’d gone inside, you would have found one man, Detective Mike Smith, working long after his usual daytime shift had ended, because it seemed
to him that the blackout offered a perfect opportunity to engage in a solo, marathon, 24-hour sweep for pedophiles, drug dealers, identity thieves and scam artists.

“I had backup power,” Smith says.
“I had coffee. Where else would I want to be?” The 18-by-14-foot room is filled with computers, webcams, caller-ID machines, VCRs, boxes overflowing with case files, and empty Starbucks Venti cups, all the gear a cop needs when he moves into an almost unbounded universe crowded with millions of people — and their multiple avatars — who deal and file share and chat and date and, yes, hunt for prey in the virtual universe.

One reason the door to the cybercrime unit’s little room is always closed, Detective Smith explains, is that “for all we know, there are times when I’m chatting with someone in this very building.”

Over the past eight years, most major metropolitan police forces have begun fielding online investigation units.
But the breadth of Smith’s criminal
investigations and the range of his online personas make him something of a virtuoso in the cyber-gumshoe world. “I am an Internet Sybil,” he says. While Smith’s two partners, Travis Rapp and Michael Gischner, tend to concentrate on cracking online identity-theft rings, Smith is just as happy to spend his days in the chat rooms, juggling multiple online identities, bumping into naive little girls, and coaxing information from young women, drug dealers, insecure teenage boys and, of course, no shortage of predatory men.

Smith’s pedophile cases have in recent months included a prominent rabbi, an Army MP, a four-star chef and the owner of a multimillion-dollar manufacturing company — each of whom found himself in trouble when he engaged in sexually explicit conversation, sent pornographic photos, or arranged a sexual tryst with a 9- to 17-year-old who turned out to be Detective Smith.

A 10-year veteran of the NYPD
narcotics squad, Smith retains something of the towheaded, surfer-boy good looks that no doubt proved a bit of a hindrance in his years working undercover on the streets of upper Manhattan. Smith discovered the
appeal of virtual identities in 1994, when a bad case of chicken pox
contracted from a teenager he had arrested sent him home.

“After 102 hours playing computer hockey — I won the Stanley Cup four times — I discovered the Internet,” he says. Specifically, Smith began reading postings on electronic bulletin boards and newsgroups, and uncovered a public forum for soliciting, marketing, and smuggling illegal drugs — a forum that was, at the time, largely unmonitored. “I came back to work telling them this is where we need to be.”

Still, Smith admits, he is at his best in virtual drag.

In none of his cases, claims Smith, does he solicit any of the criminal activity he encounters online. “I don’t have to,” he says. “Guys love to brag to women.” The anonymity of screen names only greases their bravado.

But of course that anonymity is an illusion. After a Web user has crossed a legal line, Internet service providers cooperate with police by supplying the real name and address behind a screen alias. And Smith and partners generally have an easy time fleshing out their pen pals’ dossiers: The tools that make the Internet a handy aid to criminal activity also help the police; Google is as useful to them as it is to anyone. “Before the guy is sitting in front of me in handcuffs, I usually know more about him than I do my best friends,” Smith says.

Turning back to a monitor, he scrolls down a seemingly endless list of chat rooms. “Pick one, any one, it doesn’t matter,” he says. “I can find crime in any of them.” Selecting a discussion on the illegality of marijuana, he enters as a 30-year-old, part-time topless dancer (“just for college, ya know”) who hates her life:

“I am in a lousy mood today … just got a summons … jt in the park on my lunch hour.”

Smith backs up repeatedly to correct typos. If he were impersonating a kid, he says, he would leave the misspellings — maybe even play with the type fonts, make some letters bigger, others smaller, all quirks he’s picked up while watching the children of friends as they chat online.

Although Smith likes the fact that online undercover work is physically safer than the street variety, he finds it a greater mental strain. “On the streets, if you trip up on your story, you can deny having ever said something, claim the guy heard you wrong,” he explains. “But now my guys have everything in writing. And if they catch me, they can get out the word to a thousand people, real fast.”

And they do try to catch Smith, of course. What kind of mascara does he use? Panty size? How many tampons in a box? Name a brand of makeup remover. “They’re always testing me,” he says.

But female officers and workers at One Police Plaza provide cover, feeding him data. Recently, for example, he interrupted an online chat that he was conducting in the persona of a 14-year-old girl to run across the office to ask a petite detective her ring size. A sketch of her hand now sits on top of Smith’s computer monitor, every finger labeled as to size.

As for the challenge of keeping his identities straight, Smith disdains the conventional filing methods taught in law-enforcement seminars for online pedophile investigators: “Can you see me keeping track of index cards in this mess?” Instead, Smith bases each of his online personalities on an actual friend or acquaintance — morphed down in age and size as needed.

“When you leave, I may even base one on you,” he teases.

Meanwhile, Smith is convinced that his new buddy in the marijuana chat room is a man, despite the slinky, open-blouse picture he just received via instant messaging.

Smith cracks his neck left and right, then rests his chin on his hands in front of the keyboard to stare at the monitor, waiting for a reply.

After a long pause comes an unconvincing offering: “34C.”

“He just wants a nude picture of me,” says Smith. Nothing illegal about that. But if Smith can get the guy to come clean, it could be the start of a less guarded conversation.

Drug cases take weeks to months to cultivate, and often go nowhere, he says. By contrast, Smith says, trolling for pedophiles is “like shooting fish in a barrel.” Three out of five guys will continue chatting with Smith even after he tells them he’s an underage girl, he says. One in five if he’s an underage boy.

Given the number of online predators Smith encounters, does he get depressed or discouraged? Just the opposite, says Smith. “Every time we put one guy away, we may be stopping his contacts with hundreds of kids.” In fact, investigators found contacts with over 300 children recorded on the computer hard drive of a recently arrested suspect. And, Smith adds, “if the guy’s wife stays with him once he gets out of prison, we know he’ll have a parole officer for life.” 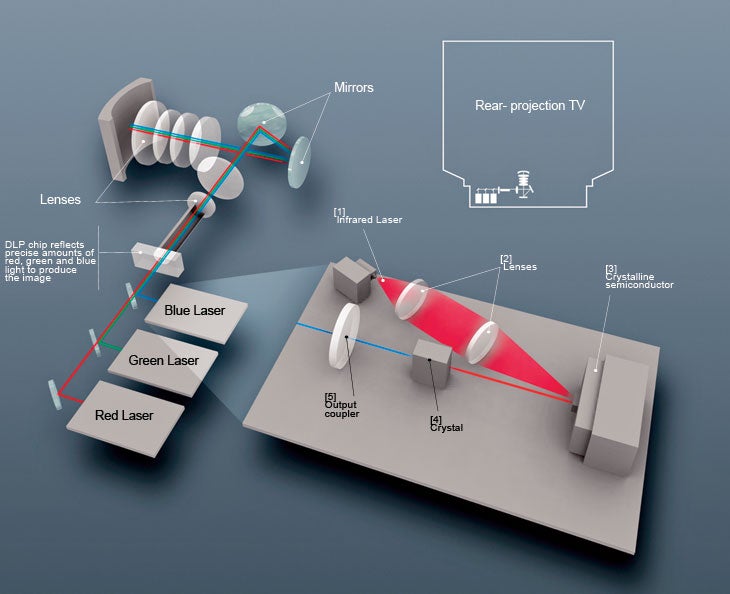 How To Build A Laser On The Cheap
Start with an inexpensive 808-nanometer (nm) infrared laser [1]. Focus its light through a pair of lenses [2] onto a crystalline semiconductor [3] that re-emits light at either 920nm (when making blue) or 1060nm (when making green). Halve the resulting wavelength by sending it through a second crystal [4] to produce visible blue (460nm) or visible green (530nm) laser light as it exits the output coupler [5].