The space shuttle Discovery just can’t catch a break. Astronauts aboard the orbiting craft, which is scheduled to land back... 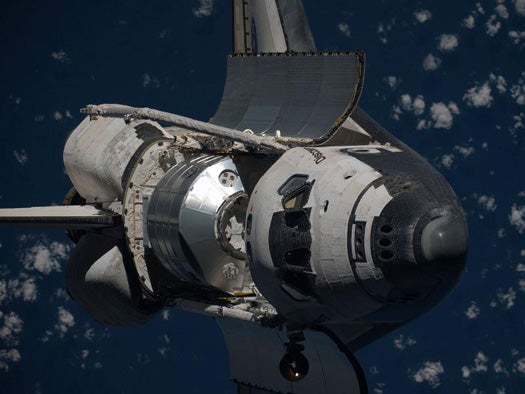 The space shuttle Discovery just can’t catch a break. Astronauts aboard the orbiting craft, which is scheduled to land back on Earth later today, fired the engines around noon EDT today to dodge a piece of space junk creeping into its orbit, marking the third piece of orbiting detritus to enter the shuttle’s neighborhood during this mission.

Mission Control could not identify the debris or gauge its size, but it was flying in essentially the same orbit as the shuttle and was expected to enter the shuttle’s safety perimeter around 1 p.m. NASA protocol requires the shuttle to maintain a buffer extending out 25 miles on all sides and 2 miles above and below the shuttle which no other object is supposed to enter, least of all “mystery orbital debris,” as Mission Control termed it.

The offending object is thought to have come free from either the shuttle or the International Space Station while the two were linked during Satuday’s space walk. It joins two other potential threats that have dogged the current mission; a chunk of Chinese satellite was expected to buzz the ISS twice on Wednesday, though it never came very close, and a large piece of a 3-year-old European rocket went screaming past just 1.3 miles ahead of the linked shuttle-station last week, though Mission Control determined that it posed no threat.

Collisions, or near collisions, with space debris are an increasingly common threat for both manned and unmanned missions as more countries, and now private ventures, are launching spacecraft and satellites than ever before. In March, the space station crew temporarily evacuated into their Soyuz escape pod as debris passed perilously close to the ISS, though the debris missed and they did not have to jettison. Today’s detour won’t delay Discovery from making its landing on schedule, but thunderstorms around the Kennedy Space Center in Florida might, keeping the shuttle in orbit an extra day. A backup stretch of runway in California could be activated if the weather doesn’t subside.

Discovery was docked with the ISS on a routine cargo run delivering supplies, scientific equipment and at least one treadmill named for TV personality Stephen Colbert. The mission also swapped in one of its crew for a stint on the space station and is bringing another crewmember home. Also returning with the shuttle: a 12-inch plastic figurine of Disney’s Toy Story character Buzz Lightyear, who is returning home to a hero’s welcome after orbiting on the ISS since last year, marking a fourth piece of space junk Discovery’s crew will have to deal with before returning home.