This 9-Year-Old Builds Tiny Houses For The Homeless

Hailey Fort is a pint-size philanthropist 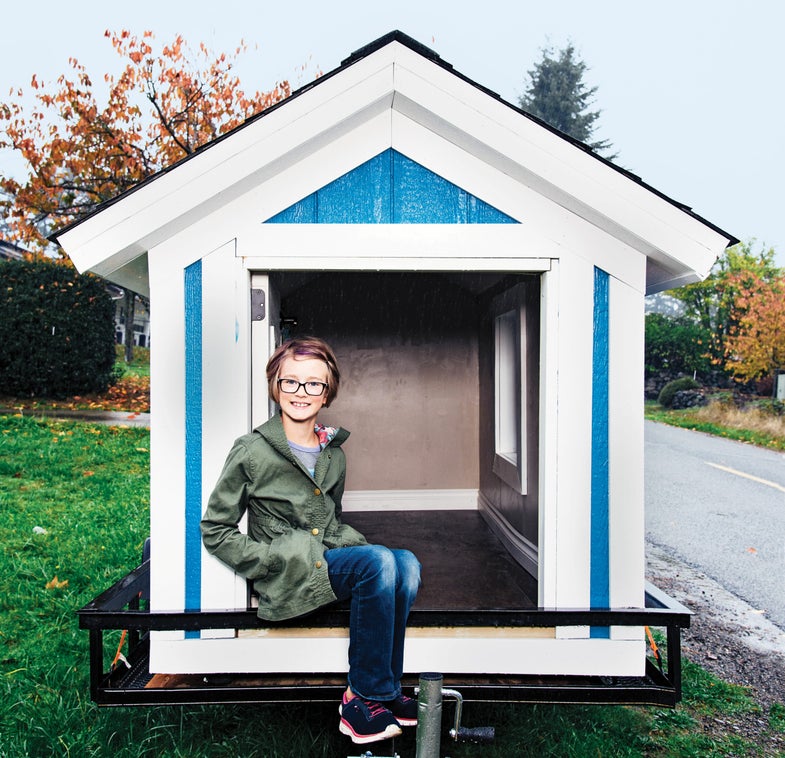 Bringing it back to tiny houses: Pint-size philanthropist Hailey Fort (seen here with the house she built for a homeless man) wants you to help others. Photograph by Jose Mandojana
SHARE

When Hailey Fort decided she wanted to build a shelter for a local homeless man named Edward, her parents said she had to draw a blueprint first. So the 9-year-old native of Bremerton, Washington, started by planning the 32-square-foot footprint—and then designed a tiny house from the ground up.

Hailey has been building things for most of her life, whether it’s helping out her mom, Miranda, with home projects, consulting with her grandfather, who’s a contractor, or tinkering on her own. (As I spoke to Miranda Fort on the phone, Hailey was outside building a boat out of scrap wood. Her little sister also asked for a screwdriver, though her request was denied.) But when it came to constructing Edward’s house, she did everything herself, although her parents did step in to give pointers and help lift heavy materials. Miranda and her husband, Quentin, banned Hailey from using power saws and let her work for only about an hour each day, so the house—which has windows, insulation, and solar panels for electricity—took several months to complete. “If she had her way, she would work on them all day,” Miranda says.

The shelters are an expansion of Hailey’s Harvest, a charity that the then-6-year-old began in 2012. Hailey and her mother had met a homeless man asking for change, so they got him some food. On the way home, Hailey asked if she could plant a garden to grow food for him and other homeless people they met. Since then, Hailey has donated hundreds of pounds of produce from the garden she tends. The next year, she started collecting countless personal-care products. And last year, she gathered clothing items too, including more than a hundred coats.

Now that Hailey is also custom-building tiny houses, she needs to raise even more money. Thanks to donated materials, including flooring and shingles, the first shelter cost only about $400. Hailey raises money through a GoFundMe campaign. It surpassed $45,000 last fall, and her parents keep increasing it with every goal she meets. “Hailey’s received a lot of donations from people,” Miranda said, “but the actual gardening and harvesting and the building has been her.”

And the Forts want the driving force behind Hailey’s Harvest to be Hailey. “At any point if she wants to stop, she can stop,” Miranda said. “There’s no pressure for her to keep going.” But Hailey has set her own goals—to grow and donate hundreds of pounds of food this summer, and to build at least 10 shelters in the next two years. Her family is coordinating with local churches to find a place to park the shelters, which have wheels for easy transportation. After that, Hailey plans to keep building and repairing things. “I want to be an engineer,” she says. In the meantime, she hopes other people will help out in their communities: “You can do that by just planting a tree or opening the door for someone.”

Ryan Mitchell, who lives in a 150-square-foot house and runs the website The Tiny Life, shares his tips for tiny-home builders.

This article was originally published in the January/February 2016 issue of Popular Science, under the title “Tiny Home Builder.”