John Steinbeck On Why ‘Camping Is For The Birds’

In the May 1967 issue of Popular Science, John Steinbeck argued that "the American passion for moving about in motorized caravans... results in little permanent damage beyond divorce and bankruptcy." 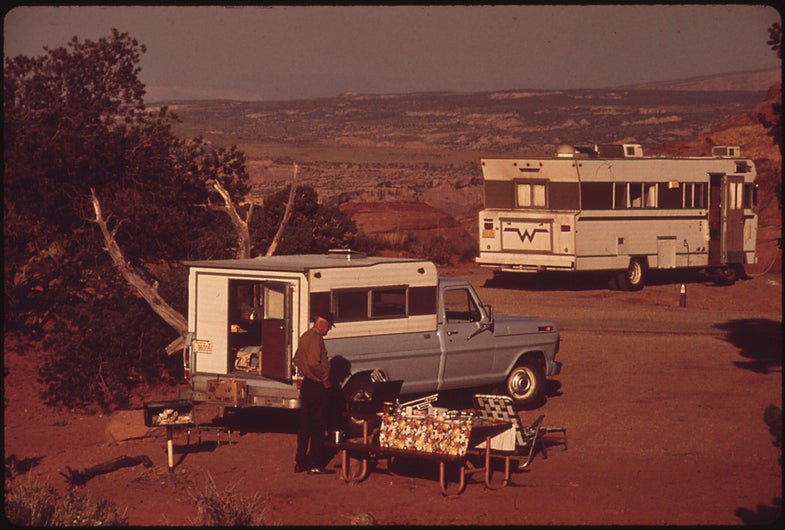 Earlier this month, we published John Steinbeck’s 1966 letter to the editor of Popular Science_, in which the Nobel-prize winning author made the case for creating a NASA for the oceans. Steinbeck wrote a second article for_ Popular Science_ the following year, about a much lighter topic: camping. In the essay below, titled “Camping Is For The Birds,” Steinbeck contrasts the idyllic imagery of motorhome advertisements (“A glowing wife is cooking something delicious just as the father brings a two-pound rainbow trout to the net”) with what he describes as the reality of camper trips (“It rains. The kids get to fighting. You are trapped in a small, smelly, miserable box.”) Read this article as it originally appeared in our May 1967 issue._

When the editors of Popular Science asked me to set down some observations on camping, I felt a certain reluctance, the same kind of hesitance I have for stepping on a butterfly I know is going to lay the eggs that make the worms that eat up my cabbages.

The present American passion for moving about in motorized caravans is surely interesting as an ethnic development, and to the gadget manufacturers highly profitable, and as far as I can see results in little permanent damage beyond divorce and bankruptcy.

It is presumed that because I have done some camping and have written about it that I must approve of it. This is not necessarily so, though I do understand the universal urge. Polluted air, hysterical traffic, the pressures of crowding and competition, the fears of age and failure under stress, the relentless nervous drive to get ahead or just stay even, and on top of these the demands, the confusion, the noise, and, finally, the gray disappointment in the rewards after all the frantic effort—all these are bound to raise in weary souls a dream of simplicity and peace, a folk memory of man close to nature and of a nature dear and kindly toward man.

The dream is inevitable. Thoreau said it and did it, and every last raddled one of us wants it. If Thoreau found that in his time “The mass of men lead lives of quiet desperation,” what would he have said of our time, when Pandora and Pandemonium are going steady. But so strong and sweet is the dream of escape to our personal Walden Pond that we are reluctant to inspect the dream for fear that it may turn out to be a dream.

Anyone who doesn’t prefer a good bed in a warm room to lumpy pine boughs and a sleeping bag that feels like a plaster cast is either insane or an abysmal liar.

For X millions of years our species camped because we had no choice. We followed the food supply, living in caves, brush piles, hollow trees, or under the dried skins of animals. Only when we learned to plant and store crops, and to control and domesticate food animals, had we need or reason to build a house, and then a hamlet, and then a city; and that great advance happened very recently in our history. Meanwhile we have a built-in memory of the good, old, simple millions of years of our prehistory and no conception of the misery, the discomfort, and the danger that were man’s constant neighbors. It is true, however, that one night in the open, in rain or snow, with no hot-dog stand in sight, nor any of the other modern conveniences we take for granted, will revive that old and terrible memory in any novice nature lover.

Camping is, and should be, a way of doing something you couldn’t do in any other way. Anyone who doesn’t prefer a good bed in a warm room to lumpy pine boughs and a sleeping bag that feels like a plaster cast is either insane or an abysmal liar. And so we try vainly for the best of both worlds—the so-called simplicity of nature plus the comfort of a modern apartment— hence the great and increasing interest in the caravan, the mobile home, the camper top, and the wheelborne penthouse.

I’ve done it all ways. Once, following the crops, I had an old bakery truck with a mattress on the floor. It was pretty nice in there when it rained, sitting on the bedding, heating a can of beans over a Sterno flame. Much later, when age had further impaired my judgment, I toured the country with Charley. But then I had as much comfort as I could pack into a small space, and I did the camping routine because it was the only way I could see and hear what I wanted to. In the process, I guess I made nearly every mistake possible. This gives me the right to offer advice to the new camper, and I don’t for a moment believe that he will any more listen to my words of wisdom that I would have.

The dream. Everyone has seen the slick advertising of beautiful new camping equipment. “Sleeps four,” the copy says, or “sleeps six.”

Don’t you do it! If you can’t resist the urge to go camping, go alone or with one companion you love dearly and with the certain knowledge that the love affair will not survive the trip. The wise and ancient adage—never leave the city limits with a friend—holds double for camping.

Six people in one outfit no matter how shiny and new is too grisly to contemplate. The picture shows a sunny meadow littered with buttercups across which a lovely little stream rushes to find its home in a deep blue lake. A glowing wife is cooking something delicious just as the father brings a two-pound rainbow trout to the net. The children, little angels, wait patiently for their dinners after which they go immediately to serene beddy-bye dreams.

The actuality. Don’t believe it. It rains. The kids get to fighting. You are trapped in a small, smelly, miserable box, with a pride of horrible children and a husband-eating wife. The land beside the road is posted, the game warden is watching. You have looked for hours for some place where you are allowed to pull off the road and you finally settle for a camp city with an entrance fee of five dollars which has all the natural simplicity of a city slum. Right away your dog tangles with the dog next door, and next door is so next that you can’t get out of your car.

By the time you’ve settled the quarrel with the neighbors, your kids are making a sound like whooping cough. The beds are wet and there isn’t any television. Your lovely wife, trying to heat three cans of corned beef hash, has spilled the alcohol and the truck is on fire.

Togetherness. Sleeps six, my eye! No marriage, no family can survive three rainy days cooped up in a camper. Your teenage daughter is in deep mourning for the steady she had to leave behind, which makes her less than civil. Your older son has his transistor radio turned on full to drown out the 300 other transistors howling on all sides, no two on the same station. Togetherness gets to be a pretty crummy institution with murder stalking the edges.

But suppose you have taken only your beloved out in your camper. She is a good little scout who loves to feel the rain on her face, who adores the wind in her hair in a convertible. She will peel to the bone with sunburn and laugh gallantly.

In this romantic situation you will soon learn some basic truths: The center of the American home is not the hearth. It is the bathroom. Take a dame out of reach of facilities and you are in trouble. I have seen many campers and, with one exception, the sanitary facilities wouldn’t keep a romance going for a weekend.

It rains. The kids get to fighting. You are trapped in a small, smelly, miserable box, with a pride of horrible children and a husband-eating wife.

You will learn further that the good little scout is afraid of nothing in the world except getting her hair blown or wet, that for women, the peace and inner security once found in church are now sought out and found under the dryer, and the confessor is a creamy-voiced character whose upper register edges into the soprano. Mark Twain once described women as “lovely creatures with a backache.” Well, nothing can bring out the backache like a camping trip.

The Kleenex Curtain. You will find to your surprise that every night finds your expensive rig parked at a motel with twin beds, hot water, and a flush toilet. No matter how you may lust for simplicity, just try running out of Kleenex. The Russians have the Iron Curtain, the Chinese the Bamboo Curtain, but we surely have the Kleenex Curtain.

I’m not trying to discourage the camping instinct, but I think you should consider some of the known hazards. If your camper is mounted on a truck bed, the ride is rough. With a quick traffic stop, everything not tied down will fly through the air. You can’t use the car radio or heater in the back or living end. If you cook with bottled gas you aren’t allowed in a tunnel. You have to find a bridge.

The lovely sylvan turnouts with barbecue pits and picnic tables maintained by the states for rest and quiet are not for you at night. A state trooper will roust you out before you can make up a bed.

The state and national parks have nice places to camp, with toilets and showers for a small fee. There you may find people from your own state or your own town, and thus be protected from anything new and strange.

If, however, you are bruised and a little raw from the discotheque tempo of our enlightened culture—go camping, but go alone. Find a pleasant place and then find the owner and get his permission to stop there, even if you have to pay him. And, finally, stay there. Don’t try to find a better place. You may get to read some of the books you hadn’t time for. When it rains, it is lovely—if you are alone. And when the sun comes out, it is pleasant to lie on your belly in the meadow, to refresh your memory of grass and of the tiny flowers that bloom in microscopia. Then you may discover that ants have to work hard for a living, too, and before long that chlorophyl is a definite soporific.

A week or so of this may mend your defenses and send you back into the fight refreshed and rearmed—or it may bore the hell out of you. But don’t believe in ads. Find out for yourself.

This article was originally published in the May 1967 issue of Popular Science_ magazine._