For a 24-hour view of one of the most vibrant coral reefs on Earth, book a room at the world's first underwater hotel 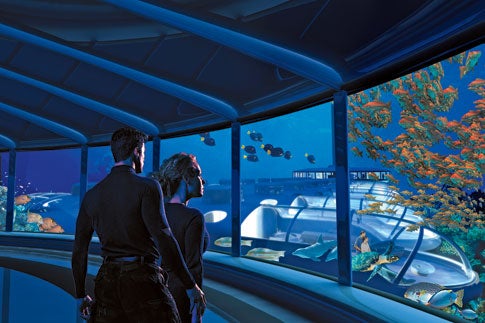 For a virtual tour of the hotel, see the video at the bottom of the page.

Bruce Jones has spent much of his career designing underwater toys for the rich and famous. The 50-year-old president of U.S. Submarines is best known for building ultraluxe custom subs, $80-million vessels that feature private staterooms, paneled interiors made from exotic hardwoods, plush carpeting, and enough onboard oxygen to keep you and 10 friends breathing easy for three weeks of cruising at depths of nearly 1,000 feet. Now Jones is redirecting his expertise in undersea opulence toward the hotel industry. His plan: to open the Poseidon Mystery Island, the world´s first major resort at the bottom of the ocean, by September 2008.

“When I was in high school, I was always writing letters to Jacques Cousteau and sketching underwater habitats,” Jones recalls. In 2000, he took the first step toward the real thing, offering a reward to whomever found the best location for his futureundersea playground. “I´ve got a lot of friends in the submersible business who are also scuba divers,” he says. “So I put the word out that if someone came up with the perfect spot, we´d pay them $10,000.” A business associate and avid diver suggested a reef off the Bahamian island of Eleuthera and collected his reward. But Jones eventually ran into trouble negotiating a price for the site with its American owners. After a year of fruitless back-and-forth, he decided to set his sights farther afield, on Fiji.

**Jones is not the first to pursue an aquatic hotel. That credit goes to Jules´ Undersea Lodge (named, of course, for seafaring scribe Jules Verne), a little bungalow at the bottom of the Emerald Lagoon in Key Largo, Florida. Opened in 1986, Jules´ is more akin to a sunken RV than a full-fledged resort. Up to six guests can rent the two-bedroom, one-bath undersea retreat for the night, but scuba certification is mandatory; the front door is 21 feet underwater.

In Dubai, where hotels are prized for ostentation, a group of commercial developers is hyping the creation of the $500-million Hydropolis Undersea Resort. A sprawling 1.1-million-square-foot complex-with lavish suites, a ballroom, a shopping mall and a missile-defense system to ward off terrorists-Hydropolis is an ambitious vision of luxury at 60 feet underwater. As of press time, though, the project had stalled in the preconstruction phase. According to Mansoor Ijaz, deputy chairman of the board for Crescent Hydropolis Resorts, LLC, Hydropolis is on hold pending “land acquisition” and probably won´t be finished before the current opening date, set for 2008.

Money, naturally, is the first hurdle facing any large-scale endeavor. In the case of Poseidon, private investors and an American merchant bank have anted up nearly all of the $105 million that Jones needs to complete the resort. Clearly, they are optimistic that Poseidon can lure enough celebrity guests and high rollers to be a financial success. Meanwhile, Jones has inked a deal with the owners of a privately held South Pacific island. If all goes well with construction, the Poseidon Mystery Island will soon be submerged in 40 feet of water in a 5,000-acre coral lagoon near the coast of a narrow, 225-acre isle located in northeastern Fiji.

(Continued on next page)

ROOM WITH A VIEW

Jones designed Poseidon to provide guests-scuba aficionados and landlubbers alike-with an all-inclusive vacation package: fine dining, stunning views of the surrounding lush coral habitat, and the opportunity to dive directly from the hotel´s airlock, a hatch that lets divers out but keeps the sea from flooding into the hotel. Once the resort opens, visitors staying in one of the 550-square-foot guest rooms will enjoy a 270-degree view of the vibrant coral reef and tropical fish, visible through floor-to-ceiling windows and illuminated by external flood lighting. Guests will access the hotel through two elevators. Because the interior pressure will be held at one atmosphere (the same pressure as onshore), they won´t have to worry about getting decompression sickness. A Frisbee-shaped module at one end of the resort will house a kitchen, reception lounge and 3,000-square-foot rotating restaurant and bar. A second saucer will enclose a library, a conference room, a wedding chapel, a spa and the largest underwater accommodation in the world, the 1,200-square-foot “Nautilus” suite priced at $15,000 a night. To ensure that guests always have a crystal-clear view of the teeming marine life, Poseidon will have an automatic window-cleaning system (barnacles, algae and other marine creatures cling to just about anything in the sea). High-powered water jets will glide along tracks mounted to the sides of the resort, spraying the windows with high-pressure seawater, filtered so as not to coat the acrylic with barnacle larvae or other critters-a mechanism modeled after the cleaning jets in an automated car wash.

If the windows of a guest module become damaged, or if the room requires other repairs, maintenance workers can detach it from the main body of the resort and bring it to the surface. To loosen the joint that connects each suite to Poseidon´s “spine,” workers will close the watertight doors separating the guest module from the spine and then pump the joint full of seawater. As the hydrostatic pressure increases inside the coupling, it will force the suite loose so that an overhead crane can hoist it out of the water.

**BUILD IT AND THEY
WILL COME

**First, however, Bruce Jones must build the thing. To keep costs down, the entire structure will be assembled in a shipyard in Portland, Oregon, and transported by a heavy-lift ship to Fiji. Meanwhile, engineers will drive guidance pilings into the seafloor. The hotel will float off the ship in one piece, and divers will thread small metal rings, bolted to the hotel´s exterior, onto the pilings. These pilings keep the structure aligned until divers can pin the hotel´s steel legs to the reef. The whole structure is then ballasted until it sinks to the seabed.

The trickiest part of building Poseidon, Jones says, is acquiring the huge sheets of transparent acrylic required for the windows in the guest rooms and the restaurant and bar area. A few manufacturers could produce the acrylic in the sizes he needs, but the cost would bankrupt the project. So Jones has decided to fabricate it himself. Poseidon´s five engineers, each a submarine designer with at least 13 years of experience working at U.S. Submarines, will design and build a specialized autoclave for forming both the curved four-inch-thick acrylic windows in each room suite and the floor-to-ceiling panes in the end modules.

Like so many other ambitious hotel-resort plans, Poseidon must overcome unenviable logistical hurdles before the first guest walks through the door. Other promising underwater projects have ground to a halt because of budget overruns and legal wrangling. Even funding and lagoon space isn´t a surefire guarantee that Poseidon will ever be completed, although Jones´s decision to pre-fab the hotel, rather than risk the vagaries of underwater construction, tips the odds in his favor. Finally, some industry analysts are skeptical that the pool of potential guests is large enough to keep the hotel afloat. But Jones is confident that he will be taking guest reservations for Poseidon-and that guests will pony up the $15,000-per-person, per-week reservation fee-for a long time to come. 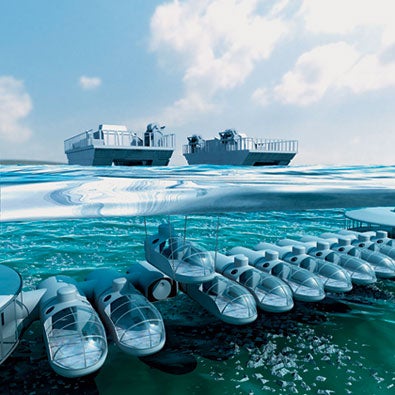 Each module is attached to the hotel’s spine with a water-tight double seal and can be detached for maintenance. 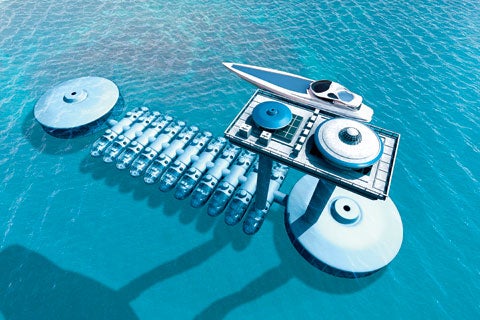 The hotel, which will sit in about 40 feet of water, will boast individual suites, as well as a library, a wedding chapel and a restaurant. In addition to scuba diving, the guests will be able to cruise around the lagoon in either a 16-person submarine capable of 300-foot-depths, or learn to pilot a three-person Triton sub, which can reach 1,000 feet. 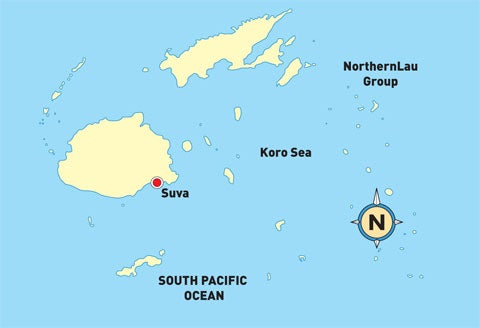 The Poseidon Mystery Island is located in the Northern Lau group, in the northeastern section of Fiji. 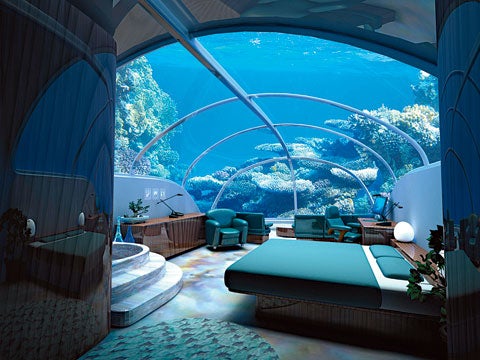 Each individual suite will be 550 square feet large, will feature a Jacuzzi, and will be capped by four-inch-thick acrylic windows, which make up about 70 percent of the wall space. Fish feeders will fire food into the water to attract local wildlife. To prevent overfeeding, the system will be limited to a prescribed number of cartridges each day. 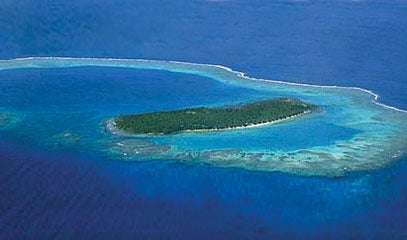 The 5,000-acre coral lagoon that surrounds the island reaches a depth of 90 feet.