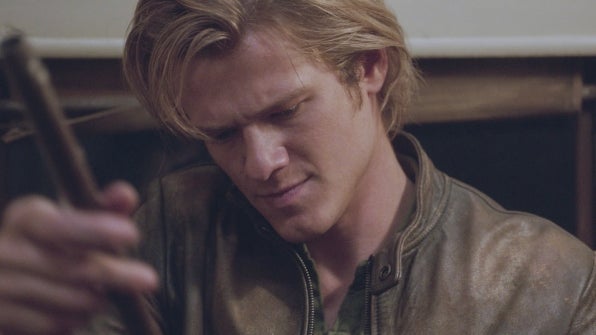 Television shows are full of badass secret agents. But only one of them has infiltrated the Oxford English Dictionary. The eponymous hero of MacGyver became a verb thanks to his penchant for building improvised solutions using only the materials at hand. He’s been inspiring makers and DIYers ever since—and now that the show is back on the air, they, in turn, are inspiring him.

“That character was so unique to the landscape because he wasn’t somebody who needed a gun or conventional tools. He was a cerebral hero who made things up as he went along,” says Peter Lenkov, the creator and executive producer of the new, rebooted MacGyver. “That was the fun of the original show, watching him build things.”

The first iteration of the series, which ran from 1985 to 1992, does differ from the reboot. Lenkov explains that, instead of flying solo, the protagonist—originally portrayed by Richard Dean Anderson and currently by Lucas Till—now works as part of a team. “There’s more of a family vibe,” he says, “more people he bounces off of.” But MacGyver himself is still the same smart, improvisational tinkerer.

And the team aims to make his exploits as plausible as possible. To that end, Lenkov and the show’s writers work with technical consultant Rhett Allain, who’s also a physics professor, blogger, and author. “I take the ideas that the writers come up with and I check the plausibility of them,” Allain explains. “It doesn’t have to be 100 percent accurate—I look at the science behind it and see if that actually could happen. Then I’ll go through the technical aspects of how you would actually have to do these things.”

For example, Allain has written in detail about how a body bag filled with fire-extinguisher foam could, technically, cushion MacGyver as he falls out of a fourth-story window. But he notes that the feat would require precise timing and a decent amount of luck. Also you should never ever ever ever ever try it yourself.

When the writers come up with a hack that wouldn’t quite work, Allain also suggests alternatives. Take the night-vision goggles that the team wanted MacGyver to build in episode 3. “They were going to color glasses red and blue, and then that would make him be able to see infrared light, Allain says. “But they just confused the idea of 3-D glasses with infrared vision.”

Instead, Allain suggested they take advantage of the fact that, in order to communicate via infrared remotes, cameras can detect infrared light. MacGyver ultimately rigs up his infrared-detecting glasses with a camera’s infrared filter, a microscope screen, and an LED light array. “Of course, it’d be hard to connect everything in a short amount of time,” Allain admits, “but it’s a completely legitimate hack.”

Some of the show’s inspirations come from writing MacGyver into an impossible situation and then brainstorming how he’d escape. Other projects are mined from the Internet. “I am a big fan of the maker movement, and I draw on maker projects for ideas too,” he says. “If I see something cool, I’ll put it in little lists. In case it’s related to a future MacGyver episode, I’ll have that ready.”

The show may draw on DIYers, but it goes both ways, with tinkerers imitating the hacks they see on the show. We asked Lenkov to find a few of MacGyver’s projects that would work well enough for amateurs to recreate. Some of these are safe enough to build at home. Others could cause death, destruction, dismemberment, etc, if done incorrectly. Unless you’re actually a secret agent, those are the ones you should avoid. 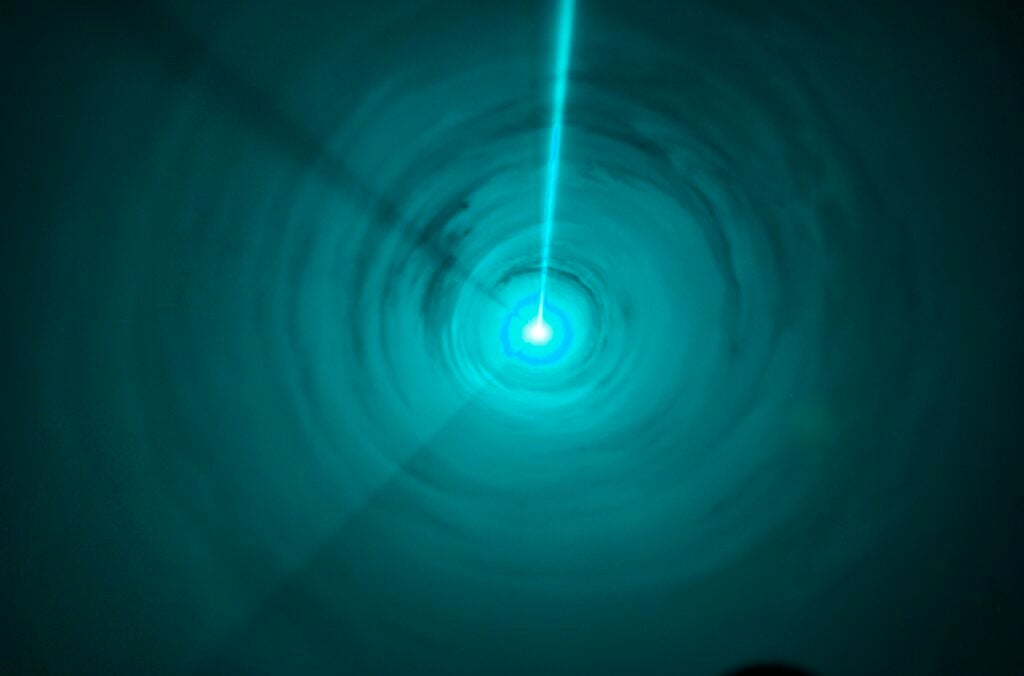 Want to spy on your neighbors from outside? In a similar situation, MacGyver rigs up a distant laser microphone. When a conversation goes on inside a room, it creates vibrations in the air—vibrations that carry to the glass of a window. All a would-be eavesdropper need do is point a laser at the window, aiming the beam so that it bounces off the glass and returns to hit a light-sensitive photocell. The photocell can detect fluctuations in the laser beam—and if you wire that photocell to a speaker, it will translate the window’s vibrations back into sound waves. In the show, MacGyver harvests a laser from a CD player and a photocell from a solar light. The laser must be very steady, so he uses chewing gum to stick it to the side of a car. These are the basic ingredients of a laser microphone. His rough-and-ready methods, however, wouldn’t create a very sensitive device. “You can make ones like that yourself,” Allain says, but “the components are a little more difficult.” In real life, you’d want to add an audio amplifier into the mix. For more detailed instructions, check out the DIY laser spy project designed by Lucid Science. 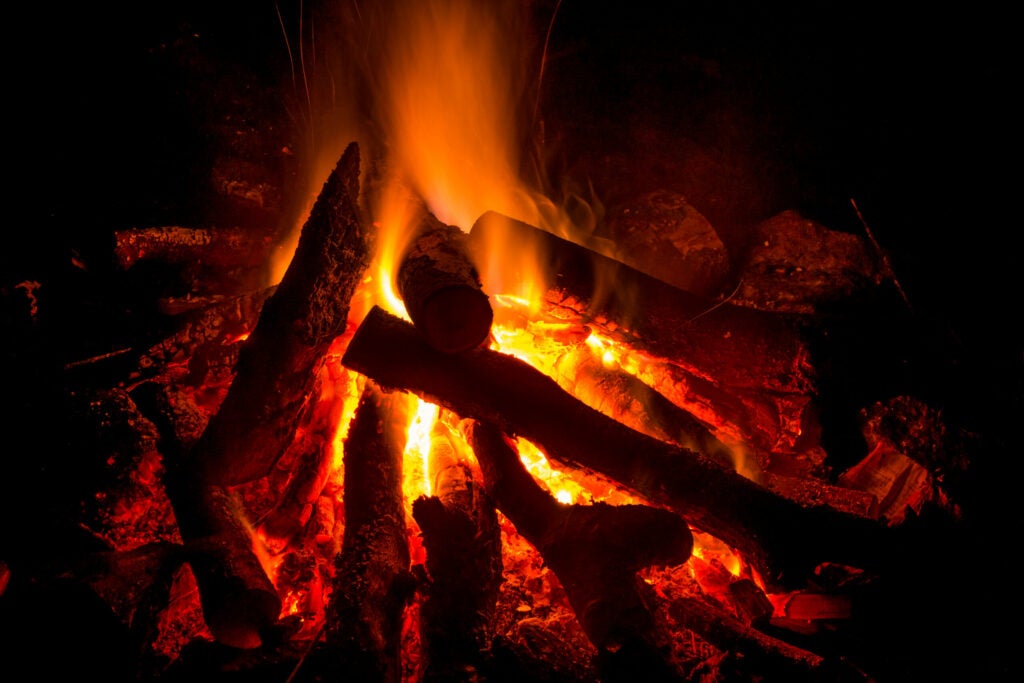 As any Boy Scout knows, building a fire from scratch is harder than it looks, especially if you’re dealing with damp wood. When he crash-lands in the woods, MacGyver’s solution is as simple as it is effective: add pine sap. The goo that oozes out of pine bark is highly flammable. So Mac slices sap from a tree trunk, sprinkles it over his kindling, and kindles a fire. “That one works just fine,” Allain says. For more details, check out Mother Earth News, which recommends that you build a cone of wood, stuff globs of sap into the center of the cone, and then light it. You can also slice sappy “pitch wood” into thin sticks with fuzzy slivers sticking out the sides and use those as fire starters. Just remember that playing with fire can be dangerous—use too much sap, and your flame might roar out of control. 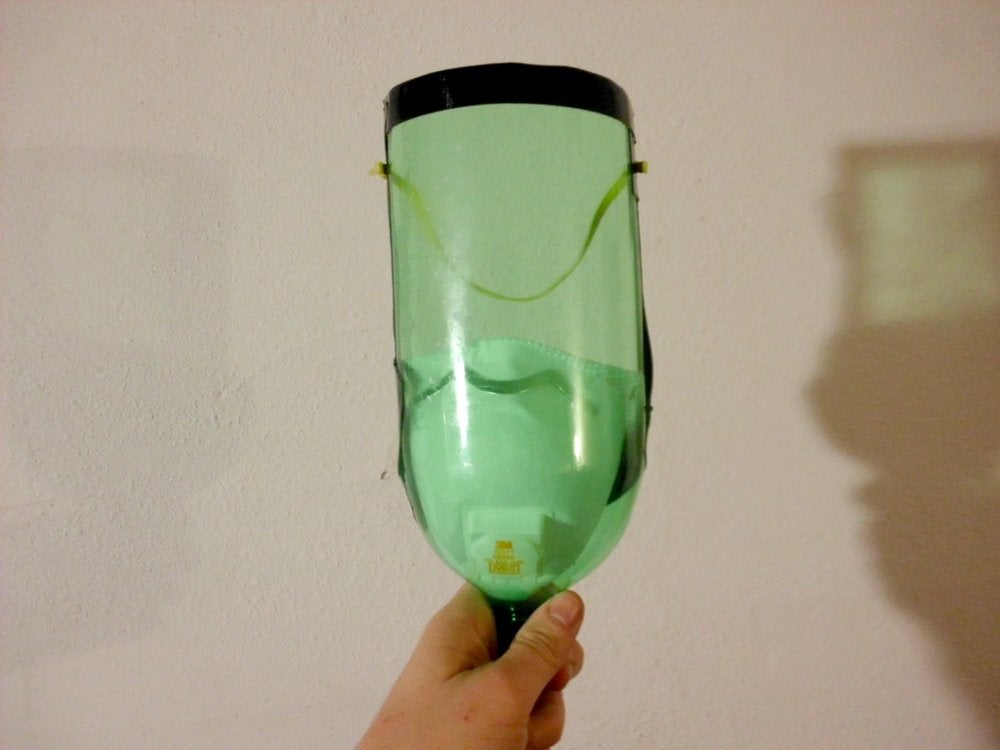 In the show’s third episode, MacGyver cooks up some chemical fumes to knock out his enemies, while protecting his own lungs with a gas mask made from a soda bottle. He cuts the bottle to fit his own face, holding it on and sealing it against his skin with the inner tubes from a bicycle wheel. This leaves a small opening through which to breathe—which Mac stuffs with wet newspaper. “The basic idea is to use wet paper as a filter,” Allain explains. “The rest of the mask is to make sure the air goes through the paper. It would work for some smoke, but it wouldn’t work for all gases.” So if you build your own soda bottle mask, don’t expect it to protect you from, say, tear gas or pepper spray. For more details, check out this version of the project from Instructables user frenzy, pictured above. 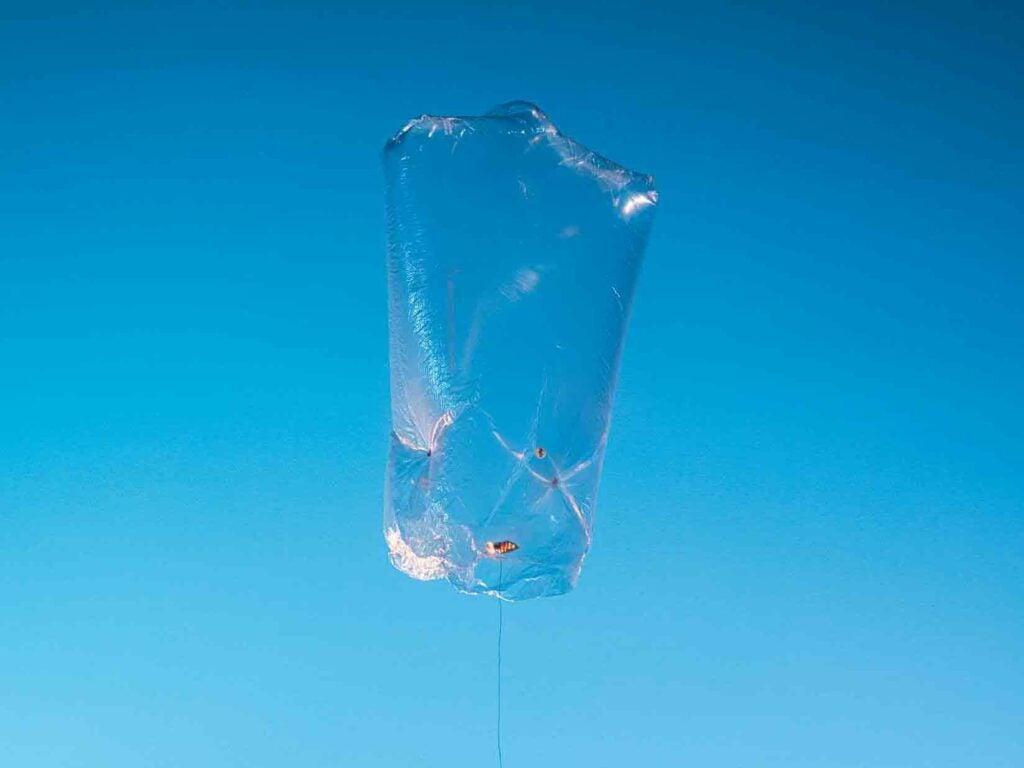 DIY eye in the sky

A birds-eye view of the ground lets you size up a situation and attack your enemies effectively. Without a satellite or drone to provide this context, MacGyver rigs up a rudimentary hot-air balloon. First, he uses a wire hanger to suspend an aluminum-foil platform from a dry cleaning bag. Below the platform, he attaches a cell phone that live-streams video of the ground below, and on top, he places a can of Sterno. When he lights the flame, the bag fills with hot air and starts floating, letting the phone serve as an airborne surveillance camera. There’s just one problem. Hot air, while it will indeed rise higher than cold air, cannot carry much weight—a cell phone and a can of fuel would drag it to the ground. “That’s one of those where conceptually it’s a valid idea,” Allain notes, “but in practice it would be stretching it.” Instead of Mac’s design, try building the fire balloon created by Popular Science contributor William Gurstelle and pictured in the above photo. It too involves a dry cleaning bag filled with hot air, but heats the air with a light dab of jellied alcohol instead of a can of Sterno. Just remember to follow the safety precautions Gurstelle suggests, and tether your fire-bearing balloon to the ground. 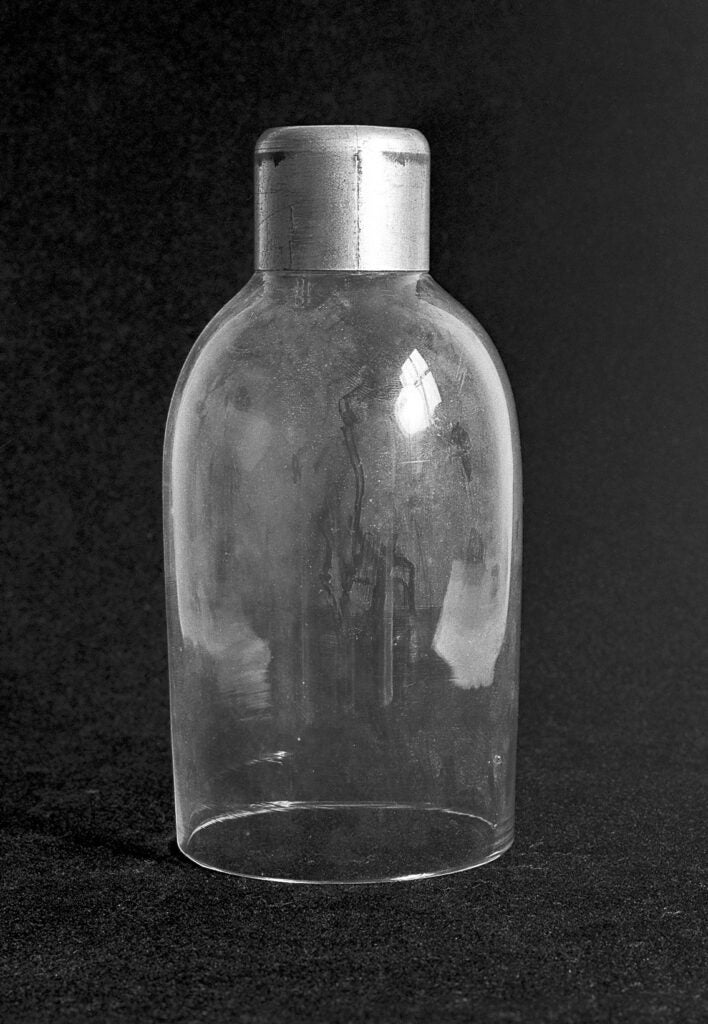 When our precious phone batteries start dying, most people get desperate. In one episode of MacGyver, the stranded hero gets desperate enough to wander into a lightning storm. The goal: charge up a Leyden jar. “The Leyden jar is a really great piece of technology,” Allain explains. The device was one of the earliest ways scientists studied electricity—you can see the one 18th-century Italian scientist Luigi Galvani used above. “It’s a capacitor, but a lot bigger than the kind that you would see in a radio or electronics kit. One side is metal, the other is a conductor like salt water. You can put a charge into one end, and it stores it.” To rig up a Leyden jar in the wilderness, MacGyver fills a plastic water bottle with stream water salted with hickory roots. For the electrodes, he wraps handcuffs around the outside of the bottle and jabs a broken piece of metal from a downed helicopter into the water. When he takes the jar into that lightning storm, it charges up with the static electricity in the air. Then he uses the jar to charge his phone. Leyden jars can be dangerous—if you build one that’s too big, the electric shock it discharges can be strong enough to cause injury or death—but with safety precautions, you can absolutely build a Leyden jar at home. Some DIY versions even use salt water like MacGyver’s Leyden jar. Just don’t put yourself at risk of electrocution to charge it up. 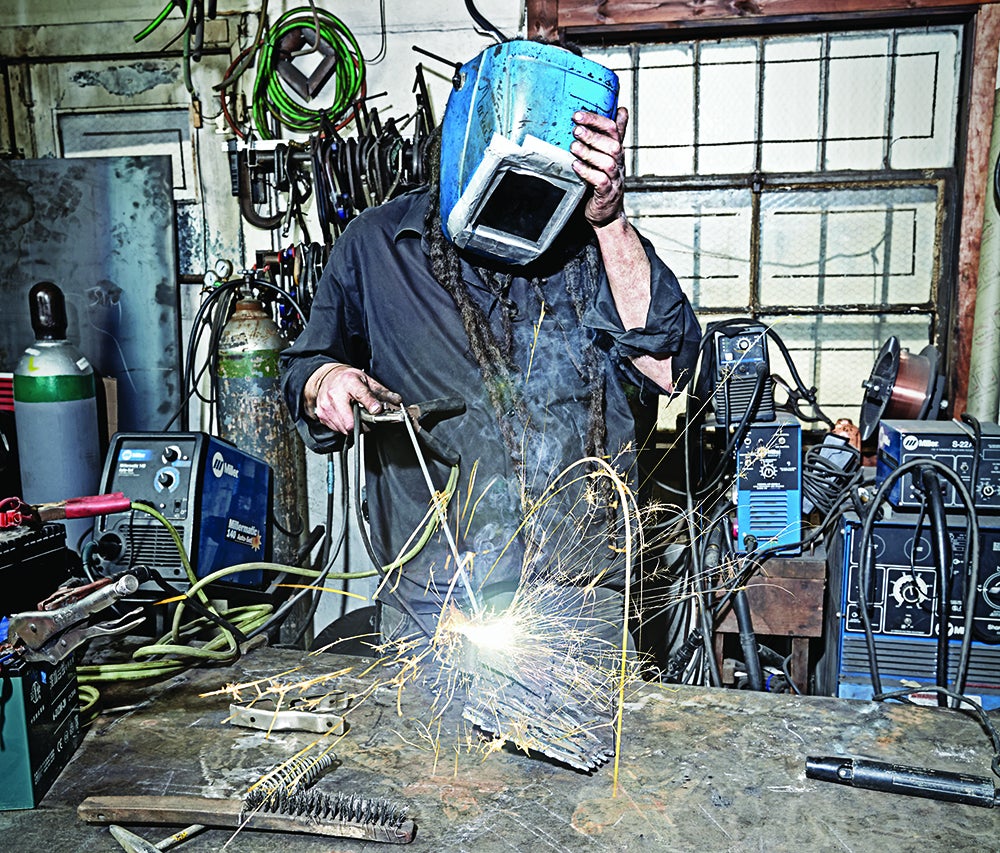 Here is where the DIY starts getting a little too dangerous to try at home. In the show’s second episode, MacGyver connects a car battery to two quarters via jumper cables. When the coins touch, electrical current passes between them, creating a super-hot arc that Mac uses to cut through a metal door. As Popular Science has documented, you can indeed turn a car battery into an arc welder capable of melting steel and fusing metal. You can see contributor Chris Hackett using this project above. But unless you know what you’re doing, you can burn yourself, electrocute yourself, and cause everything from house fires to gruesome injuries to death. So this is one of those projects that we recommend you avoid. 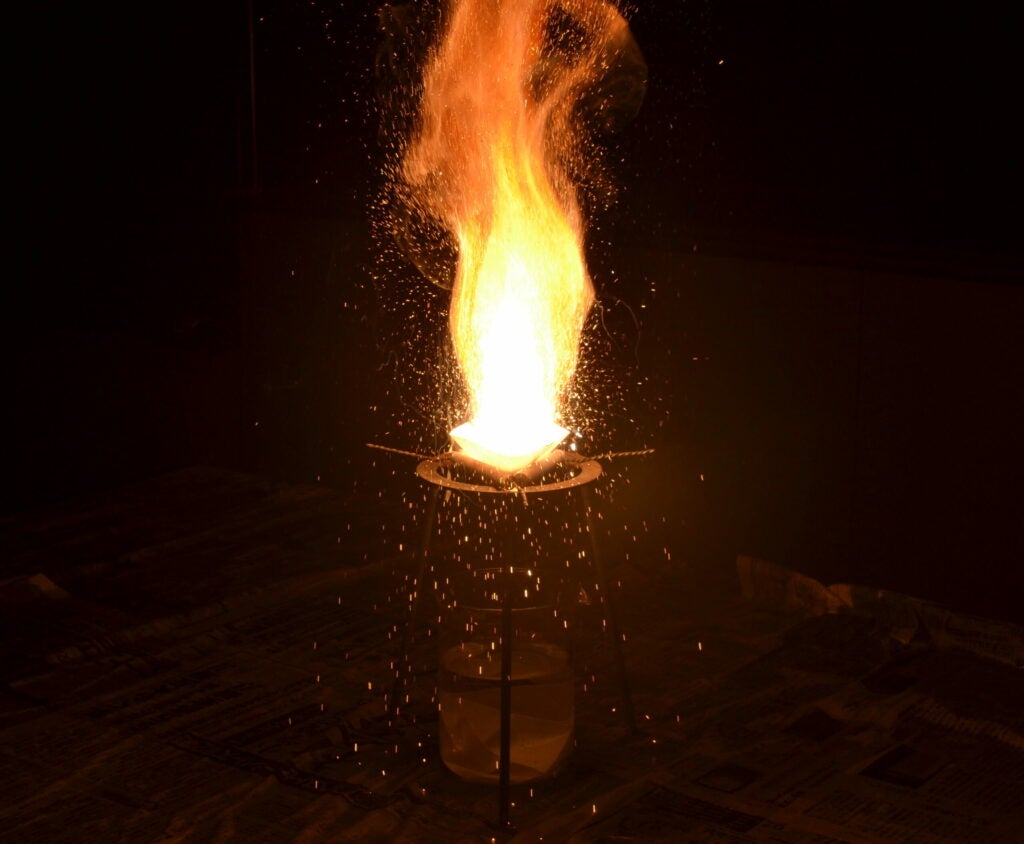 MacGyver doesn’t need a car battery to defy steel. Stuck on a runaway train, he decides to sever the metal that connects the engine to the rest of the cars. To do so, he packs magnesium and rust shavings into a long metal rod and lights it with a road flare. Thermite burns at up to 4,000 degrees Fahrenheit, so this improvised thermite lance could get hot enough to slice through not only steel, but concrete and other materials as well. Thermite can be useful—workers use it to weld railroad ties—but it isn’t a project for amateurs. “Thermite’s a dangerous but simple thing to build,” Allain says. “It gets so damn hot—if you have a container it will melt through your container. It makes a lot of sparks, and if you don’t know what you’re doing, you could melt through yourself.” So you should skip this one as well.
Projects
build it yourself
editor's picks
electricity
Fire
lasers