The ailment has landed others in intensive care. 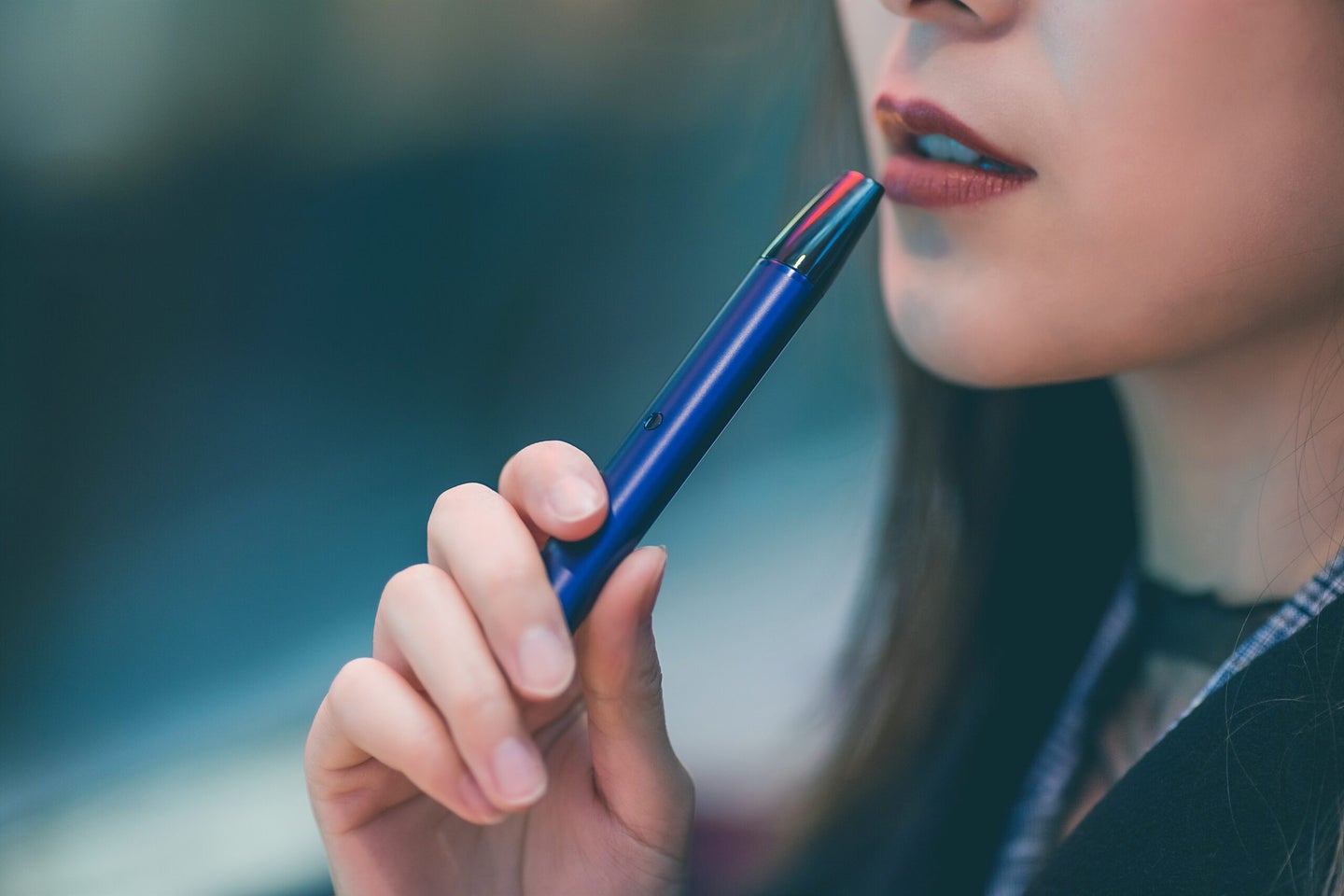 A serious illness potentially linked to vaping has stricken nearly 200 people, mostly young adults and teens, across 22 states. On Friday the outbreak caused its first fatality. The Illinois Department of Public Health (IDPH) has not released details on the individual, other than to say they were hospitalized with severe respiratory symptoms and also used e-cigarettes, but has reported that all of Illinois’ 22 confirmed cases occurred in people aged 17-38.

“The severity of illness people are experiencing is alarming and we must get the word out that using e-cigarettes and vaping can be dangerous,” said IDPH Director Ngozi Ezike.

The Center for Disease Control announced on August 17 that it would join state departments of health in investigating recent reports of lung disease, primarily in youths. “While some cases in each of the states are similar and appear to be linked to e-cigarette product use, more information is needed to determine what is causing the illnesses,” the CDC reports.

The ailment has landed some young people in intensive care and on ventilators, and it may be linked to irreversible lung damage. Individuals present with symptoms including cough, shortness of breath, and fatigue, with some also reporting vomiting and diarrhea and symptoms worsening rapidly over the course of days or weeks.

There’s no evidence yet that anything contagious is involved, but the 193 possible cases that have cropped up in 22 states since late June have enough in common to cause concern: In a message to healthcare providers, the CDC noted that all patients who have the illness reported vaping in the weeks and months before they got sick. In the wake of the outbreak’s first known fatality, the IDPH said anyone who had chest pain or difficulty breathing while vaping in the months prior to experiencing their symptoms outlined above should seek immediate medical attention.

The American Vaping Association says black-market street vapes containing tetrahydrocannabinol (THC) and synthetic drugs are being fingered as a culprit by “several health departments,” according to reports from CBS, but no public health departments have announced links to a common source. Some of the patients reported using products derived from marijuana, but the CDC previously reported that too many of them weren’t for it to be the connecting factor, and that no commonality had been found in the substances used. It may be too soon to conclusively blame e-cigarettes for the illnesses, but it’s also too soon to assume mainstream devices and products are safe. Experts aren’t shocked to hear that e-cigarettes are being linked to illness, even without the addition of black-market contaminants.

“This is the headline we’ve been trying to prevent,” says Joseph Allen, an environmental health scientist at Harvard University’s Chan School of Public Health. Allen is a co-author of a study published earlier this year that found fungi and bacteria lurking in some popular brands of e-cigarette liquid, but he says contaminants are far from the only reason public health experts are worried about vaping.

He generally studies the health impacts of chemical flavor inhalation, and he says that the flavors in vapes—while they may be proven safe for ingestion, where they go through your digestive tract—aren’t tested for their safety when aerosolized and inhaled into your lungs. Industrial workers who make flavorings have been warned about one specific hazard, known as “popcorn lung,” for more than a decade. First detected in workers who inhaled chemicals used in microwave popcorn, this is what happens when your lung’s smallest airways, the bronchioles, become inflamed and scarred.

The bronchioles branch off to deliver air to tiny sacs called alveoli, which is where oxygen actually makes its way into your blood. With enough damage to the bronchioles, you can block off that last leg of the journey and leave alveoli—and, by extension, your blood and the rest of you—starved for oxygen. Groups of chemicals linked to popcorn lung appear in some vapes, but even worse, the inhaled effects of many e-cigarette substances are totally unknown.

“When you have millions of kids inhaling this cocktail of chemicals that were never tested for inhalation safety, this type of headline is predictable, and also avoidable,” Allen says.

E-cigarettes have been on the market for well over a decade now. They’ve been widely adopted by young people despite public health efforts to decrease their use, and it’s possible that whatever this new illness is, it’s manifested before in isolated cases and just not been detected, says Sharon McGrath-Morrow, a doctor who studies lung disease in children at Johns Hopkins University.

Smoking and vaping is bad for lungs of any age, but the pulmonary systems of people under age 18 aren’t finished developing, McGrath-Morrow says, which means they’re especially susceptible to inhaled substances. That might help explain why this disease seems to be disproportionately affecting young people.

Vaping and its health impacts have never been subjected to a long-term, conclusive study, and McGrath-Morrow suspects this ailment, whatever it is, is just the tip of the iceberg. “There are probably certain children who are more susceptible,” she says, and those are the people who are getting noticeably sick now. Down the road, however, others who vaped through their youth could suffer from a myriad of ailments.

What this will mean for today’s teen vapers as they age is difficult to say, because so little is actually known about the impacts of vaping. Meanwhile, what constitutes a “vape,” along with the availability of things like flavors and high-nicotine options, has changed rapidly over the past decade or so. “The reality is that we don’t know who’s at risk and who isn’t,” says McGrath-Morrow.

Even once we understand all the potential health hazards of vaping, it will take yet more research to understand which products—and in what quantities—pose a real threat.

When they came on the market, vapes were touted as smoking cessation aids. But many young people ingest nicotine for the first time in vape-form—and then keep doing so. The electronics have a reputation of being better than cigarettes for smokers, and they can indeed help people quit a habit that we know for sure is very bad for you. But for young people with no history of smoking, vapes represent a whole new horizon of potential health risks.

“This tragic death in Illinois reinforces the serious risks associated with e-cigarette products,” Robert R. Redfield, Director of the CDC, said in a statement. “E-cigarettes are not safe for youth, young adults, pregnant women, or adults who do not currently use tobacco products.”

A version of this article was originally published on August 19. It has been updated to reflect newly reported cases and one fatality.