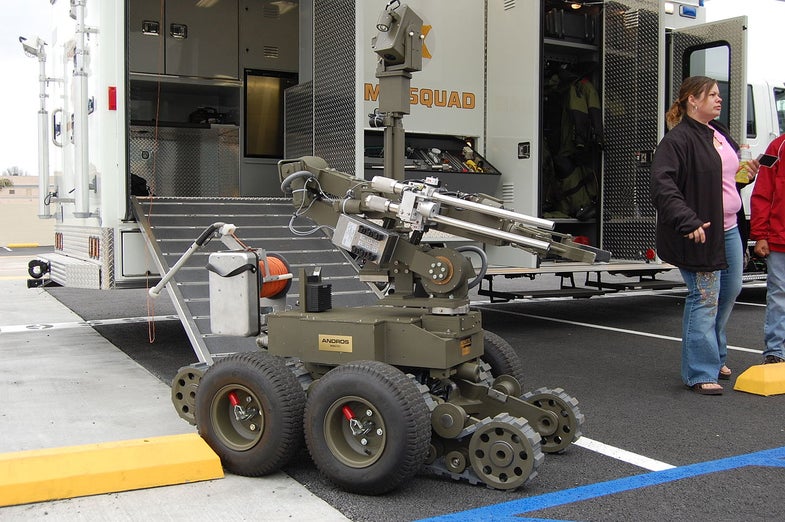 In life and death situations, a robot gives police options. Last week, the Los Angeles County Sheriff’s Department, in a standoff with an attempted murder suspect, did something unusual: they waited him out, and then sent in a robot to disarm the suspect. With the man’s gun gone, the standoff ended peacefully.

From the LA Times:

The most immediate comparison for police robot use comes from this summer. Following a shooting rampage that left five police officers dead in Dallas, Dallas police outfitted a bomb squad robot with an explosive, and used it to kill the holed-up shooter. While both are cases of police using robots in novel ways, what was unusual in Dallas was the deliberate use of an explosive to kill, more than using a remote control robot at all.

Police squad robots, with two-way microphones and cameras, have a longer history of ending potentially dangerous situations without more violence. In 2009, negotiators speaking through a police robot convinced an armed man to disarm and surrender peacefully. In 2015, a negotiators talked to a knife armed man standing on a San Diego highway overpass. Ultimately, the negotiators used a police robot to deliver him a pizza, which he ate before dropping his knife and walking calmly away from the ledge. In both of these instances, the robot became a tool of negotiation, a physical interface between the police and the person police deemed a threat.

When disarming the man in Los Angeles, the robot didn’t negotiate. Instead, while the man was distracted, police used the robot to grab the man’s weapon, which was on the floor behind him. The clearest precedent for this comes not from another bomb squad robot, but from a Customs and Border Protection Reaper drone, flown over a standoff near Grand Forks, North Dakota. In that case, cattle thieves holed up on a ranch with weapons to keep the police at bay. The Reaper, which can fly overhead for up to 24 hours at a time, used infrared cameras to watch the cattle thieves, and figured out when the armed men were asleep. The drone operator relayed that information to police, who then stormed the ranch and made arrests, without any shots fired.

The Los Angeles County Sheriff’s use of a drone to disarm a suspect in an armed confrontation isn’t the dawn of a new robocop era of police. We are, instead, living in an era of robot-assisted cops.