The creator of this humanoid from a 1953 issue of Popular Science hoped robots could one day handle radioactive material and mix explosives. 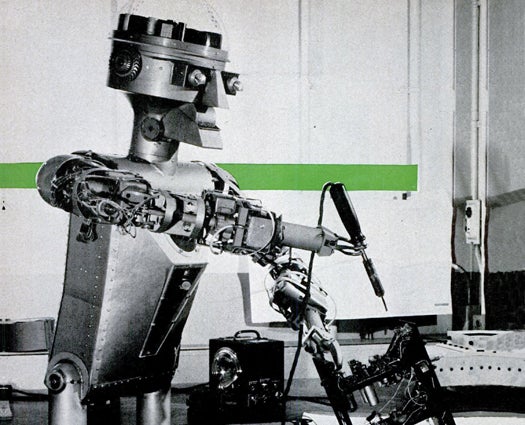 When this “mechanical man” appeared in Popular Science‘s December 1953 issue, the U.S. military was experimenting with humanoid machines that could help teach first aid and test oxygen masks and flying suits. Harvey Chapman, an engineer in Los Angeles, envisioned an android with a civilian purpose: He spent 90 days in his garage turning discarded airplane parts into Garco, a robot that could hammer, saw, mix chemicals, solder, and stack boxes. Chapman directed Garco using a panel of buttons, a two-way radio, and an electromechanical control arm. He hoped that in the future robots like Garco could work in extreme barometric pressures, handle radioactive material, and mix explosives. Engineers today are still working on robots that can operate in dangerous situations. (Read about tomorrow’s emergency first responders here.)

ANATOMY OF AN ANDROID

BRAIN
Parts from six aircraft-control systems made up the robot’s brain, and 1,200 feet of wire cable formed its nervous system.

ARMS
Chapman used a 22-button panel to direct the left arm and a five-jointed electromechanical control arm and handgrip to manipulate the right arm and hand.

FACE
Signals from the control panel directed the movements of its jaw and lips and even made its plastic eyes roll.

LEGS
The robot’s legs could extend to increase its height by six inches.

Read the full story of Harvey Chapman and Garco in our December 1953 issue.