Along with a VR headset and the new G5 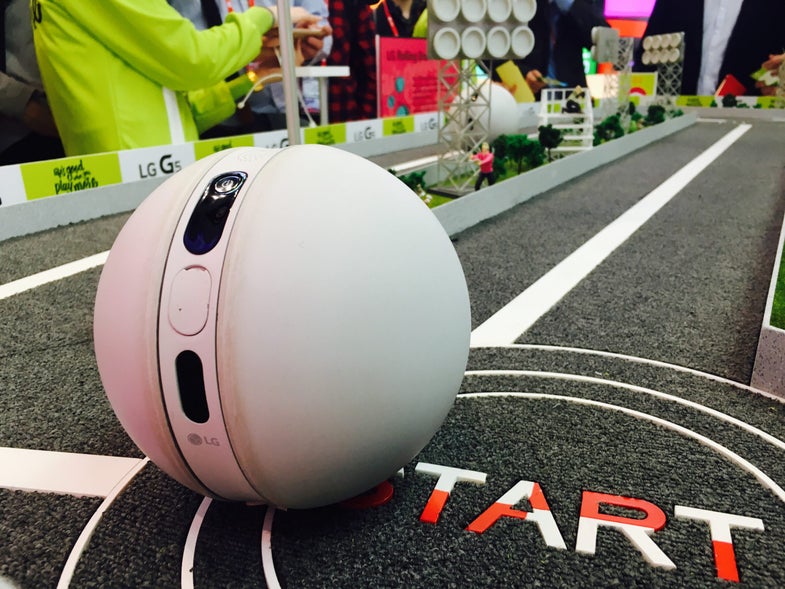 LG is not known for its BB-8-like home surveillance devices, but that could change, starting today. At the Mobile World Congress tech show going on this week in Barcelona, Spain, the hardware manufacturer took the stage to life the veil off of its new flagship smartphone and VR headset.

The Rolling Bot comes equipped with an 8-megapixel camera. The shooter allows for grabbing of photos or video, so you can watch things on the homefront while you’re away at work. With Wi-Fi built-in, footage can be streamed to your LG G5 device (more on that later). Those with LG appliances can control them with Rolling Bot.

The bot can be controlled manually using an app on your phone, though Rolling Bot responds to laser light as well. The included pointer shoots out a red dot that can be used to direct LG’s bot for the home. The bot also gives off sounds, further scratching that BB-8 itch.

LG also introduced a new flagship phone. The new LG G5, like the devices before it, runs Android with a similar-sized screen. In the new edition of the device, the G5 offers a rear fingerprint sensor, USB-C connector port and an all-metal design. Despite it’s fully aluminum outer shell, a switch can be flicked to pop the bottom off—allowing for quick swapping of the 2,800 mAh battery.

LG is positioning the phone as a kind of “modular” device that can be customized to some extent by its users, similar to the Project Ara smartphone showed off by Google — except that HTC is actually shipping its phone in real life soon. Along with changing out the energy supply of the device, a camera attachment can be thrown in. Containing a bigger battery and better physical controls for photo junkies, it’s clear that LG’s G5 contains a lot of potential, especially if the company or third-parties think of other clever uses.

LG’s VR headset is less impressive. The LG 360 VR offer a much slimmer profile than competitors like the HTC Vive or Oculus Rift. But the experience from within virtual reality doesn’t quite live up to competitors.

While the experience provided enough for a portable experience—a la Glyph—it wasn’t as smooth or as immersive as options like Playstation VR or even Gear VR by Samsung. The slim form factor does have one major advantage: mimicking glasses, with relatively small and foldable arms. We hope the more capable VR units take note. Even upcoming and unconfirmed ones, cough Google cough.

But what’s a VR headset without user content to watch on it? LG offers the answer with its own new 360-degree camera.

The company’s device, titled 360 Cam, will allow users to capture immersive 2K video using two 13-megapixel cameras on each side of the unit. The camera comes with 4GB of internal storage and supports the use of micro-SD cards.

Like the recently announced Samsung 360-degree camera, LG’s unit will come with a tripod, upload to Youtube and Google Street View.

All-in-all, it’s clear HTC wants to match its hardware rivals (namely Samsung) on every front when it comes to new devices, and even go a step beyond by providing a cute, fun, and potentially ominous rolling home security robot. The latter device could be a major differentiator for HTC, which has struggled to gain quite the market share in smartphones as Samsung.