The kilogram has a new definition

A physicist explains why and how we redefined a basic unit of measure. 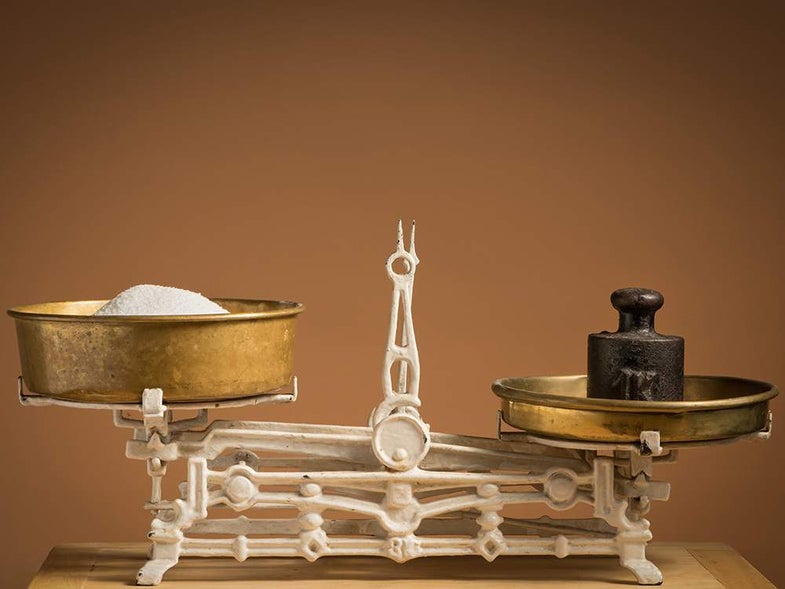 How much is a kilogram? 1,000 grams. 2.20462 pounds. Or 0.0685 slugs based on the old Imperial gravitational system. But where does this amount actually come from and how can everyone be sure they are using the same measurement?

Since 1889, countries who are members of the General Conference on Weights and Measures have agreed to use a standard block of metal—kept near Paris—to define the kilogram. But although the modern block is stored in a highly controlled environment, its weight can change by tiny amounts as wear and tear causes it to lose mass and dirt causes it to increase. To address this problem, scientists around the world have spent nearly two decades discussing how the kilogram could instead be defined in relation to constant measurements of nature. And now they have finally reached a decision.

The first kilogram (originally called a grave) was defined in 1793 by a commission of the French Academy of Sciences, who wanted a better standard than the fixed amounts of grain that had traditionally been used. The commission decided that the new measure would be the mass of one cubic decimeter of distilled water at 4℃ (the temperature at which water has its highest density under standard conditions). This had the advantage in that most properly equipped labs would be able to reproduce this standard. Subsequently, a prototype of this mass was cast in brass.

Unfortunately, this definition of mass depended upon another variable measurement, the meter. At this point, the meter was only provisionally defined as part of the distance from the North Pole to the equator. Once the value of the meter and the temperature of water at its densest were more accurately defined, the kilogram also had to be replaced. And a new prototype was cast in platinum to represent this mass.

Eventually, this was replaced with the international prototype kilogram (IKP) used today, cast from a mixture of platinum and iridium to make it very hard and prevent it reacting with oxygen. The IPK and six copies are kept by the International Bureau of Weights and Measures in the Pavillon de Breteuil, Saint-Cloud, near Paris in France to act as a reference to measure against. Copies of the IPK are transported across the world to ensure all participating countries use the same standard.

But even the modern IPK can gradually change in mass. Radically, the answer from the International Bureau of Weights and Measures is to overhaul the definitions of a kilogram, as well as all the other basic units of measurement used in science (known as SI units, from the French for international system).

Instead of measuring the kilogram against a block stored in a vault, we can define it based on precise values of constants of nature. Agreeing on a definition has taken a long time because we needed to be able to measure these constants to exacting standards with an uncertainty of 30 parts per billion (meaning the measurements are accurate to 0.00000003 of a unit).

Scientists have actually already done this for time and length. A second is no longer a fraction of the time it takes the Earth to revolve, which can change as the globe speeds up or slows down. Instead, a second is now defined by the time it takes for a certain amount of energy to be released as radiation from atoms of Caesium-133. Specifically, one second equals 9,192,631,770 transitions in the hyperfine ground state levels of Caesium-133. This is the same no matter when or where it is measured.

Scientists were then able to redefine the metre in relation to the second and another natural constant, the speed of light in a vacuum (c), which scientists have calculated as 299,792,458 metres per second. So one metre is now the length travelled by light in 1/c seconds.

The new definition of the kilogram uses a measurement from another fixed value from nature, Planck’s constant (h), which will be defined as 6.62607015×10−34 joule seconds. Planck’s constant can be found by dividing the amount of energy a particle of light or “photon” carries by its electromagnetic frequency.

The constant is usually measured in joule-seconds but this can also be expressed as kilogram square meters per second. We know what a second and a meter is from the other definitions. So by adding these measurements, along with an exact knowledge of Planck’s constant, we can get a new, very precise definition of the kilogram.

Part of the reason creating the new definition has taken so long is because scientists have had to create very precise devices to measure Planck’s constant with a high enough degree of accuracy. The method has also been controversial because it will break the link that the kilogram has to other base SI units, particularly the mole, which measures the amount of a substance in terms of the number of particles it’s made from. Some scientists have proposed alternative methods as a result.

But following a symbolic vote, the new definition of the kilogram will be used by the International Bureau of Weights and Measures and national measurement institutes around the world, along with new definitions of the remaining base SI units, the mole, the kelvin (temperature), the ampere (current) and the candela (luminous intensity).

For most people, everyday life will carry on as normal despite the redefinitions. One standard bag of sugar will contain as much sugar as it ever did. But some of these changes, for example to the kelvin, will mean practical advantages for scientists making very precise measurements. And to answer the question “how much is a kilogram”, we will no longer have to compare blocks of platinum or worry about scratching them.

Kevin Pimbblet is a Senior Lecturer in Physics at the University of Hull. This article was originally featured on The Conversation.