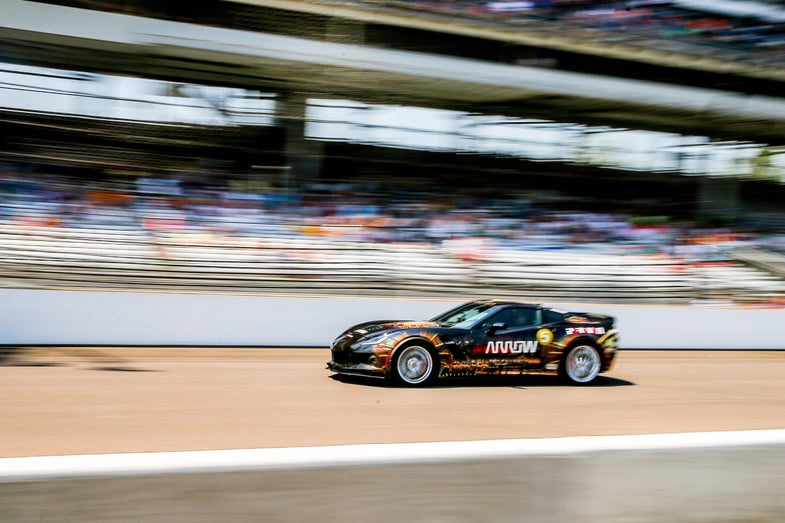 The Internet of Things is cool, and semi-autonomous cars are cool. Putting them together is extra cool. But putting them together to enable former IndyCar driver, current co-owner of IndyCar team Schmidt Peterson Motorsports, and quadriplegic Sam Schmidt to race again is the highest level of cool.

Volunteers working at the tech company Arrow have been working on its SAM (Semi-Autonomous Motorcar) project for a few years now. Their goal was to take the latest in IoT innovations and enable Schmidt to actually drive again.

The latest iteration of the project is based on a stock, street-legal 2016 Corvette Z06 Stingray. The basics, like the engine and transmission, are unmodified. “Everything we’ve done is on top of what’s there,” said lead engineer Noel Marshal. The team did add a bar that can hold a six-point harness to keep Schmidt safe and securely in place as he races. “That’s the only mod you can see in the cockpit, besides cameras in your face,” she said in a phone interview.

The cameras in your face are how Schmidt is able to actually drive the car 100 percent on his own, according to the team. He wears a sunglasses-style headset with reflective markers. Four cameras mounted on the dash track the movements of his head and translate them into driving actions. The stock steering wheel is in place; you could turn off the IoT system housed in the trunk and drive it the usual way. But the team found that Schmidt was using the movement of the wheel as feedback. “He can see how quickly he’s turning into a curve,” Marshal said.

That’s crucial, because though Schmidt’s spinal cord was severely injured in a crash during a practice lap in 2000, he is still very much a race car driver. “We never had to tell Sam how to drive on a racing line,” said general Arrow engineer Ryan Hanson. “We never had to train him on how to take a turn. The way we developed our sensing system takes advantage of the training in his brain already.”

That came to light early on in the SAM project, when the team thought it would be a good idea to use a path guidance system similar to the lane-keeping tech in some new cars so that if Schmidt drifted left or right, the car would bring him back to center. “As soon as we saw Sam drive on a simulator, we realized we can’t really do that with a racing line,” said applications Arrow engineer Grace Doepker with a laugh. “None of us are professional drivers, so we didn’t think about it.” 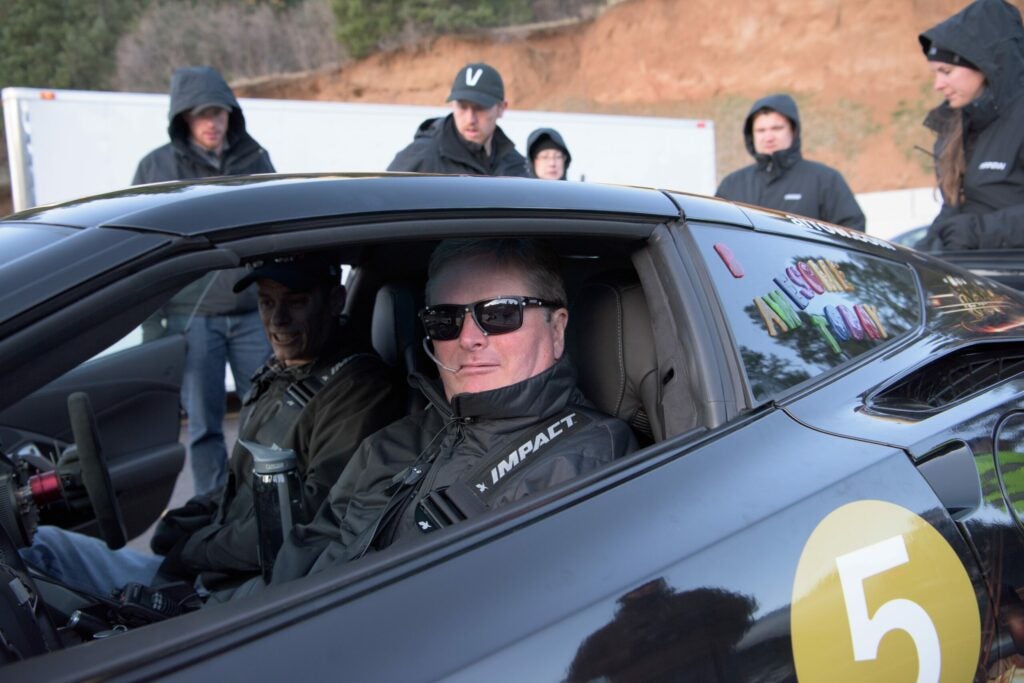 Schmidt using the “sip and puff” device for gas and brake control.

They also realized quickly that Schmidt needed a better way to control the gas and brake. Sometimes he wanted to hit it hard, and sometimes he needed to coast a bit, and that wasn’t working well in the previous iteration of SAM. “It was Sam’s idea to use a tube in the mouth,” said Doepker. “He can blow for gas and suck to brake.” It’s similar to the tube many quadriplegics use in their everyday lives, but this this one is a lot more detailed than most, Doepker said. “At first, I didn’t think that it would even work, but it did.” SAM 3.0 also got voice control, which allows Schmidt to start the car and put it into gear himself rather than having those tasks performed for him by the co-driver.

Schmidt does use a co-driver in the car, and lately it’s been Robbie Unser. There are drivers-ed-style mechanically linked gas, brake, and steering wheel on the passenger side of the Corvette. But the co-driver is acting as a racing coach as much as a safety measure for Schmidt.

“We’re not trying to set records with autonomous driving,” said Marshal, though Schmidt did reach 152 mph at Indianapolis Motor Speedway on May 18. “We’re not looking to compete or commercialize the technology. We look at it as trying to enable drivers. It’s an assistive set of technologies to put them back behind the wheel.”