A Few Questions For Steven Johnson: Why Innovation Is In Everything

Not just in the latest app or smartphone, explains the creator of How We Got To Now 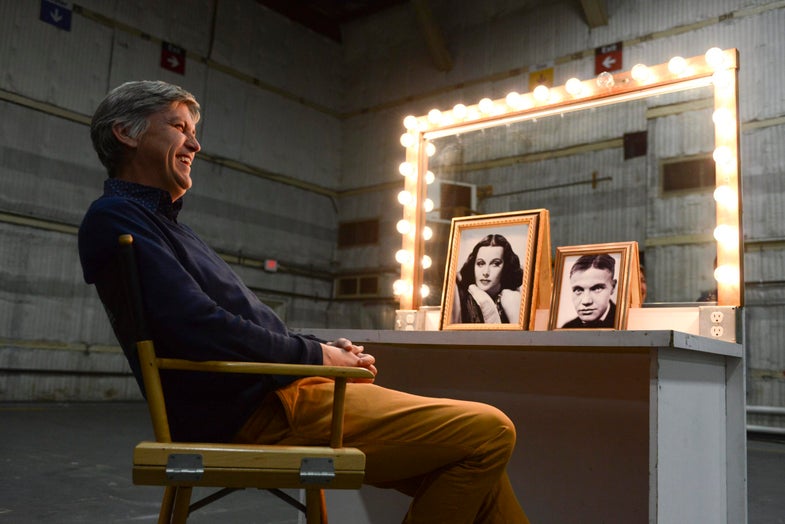 Steven Johnson, presenter of "How we got to now" on the Sony Studios backlot. Stewart Cook
SHARE

Journalist and author, Steven Johnson is a sucker for innovation. He’s covered it in various forms in his book Where Good Ideas Come From, and in The Ghost Map, which followed the discovery of the cure to cholera. Last night, his new show for PBS, How We Got to Now, premiered. Through six episodes, divided into six innovation themes—Clean, Cold, Sound, Light, Glass, and Time—Johnson tells the story of the modern world through the inventions that made it possible.

Clean takes Johnson to the sewer system to chronicle the rise of clean, safe water, and the evolution of methods for keeping us disease-free. Cold charts the evolution of the simple refrigerated rail car to giant complexes in the middle of the desert that mimic ski slopes. Light sheds insight on how the simple flash bulb could influence political change. And Glass brings viewers back to the invention of lenses, which have evolved to show us worlds too small or far for us to see otherwise.

All of these seemlingly small inventions have incredible and far-reaching consequences, which branch out through time. The inventors are not always billionaires—some even die not knowing the impact they had—and the technologies may seem basic by modern standards. But that’s by design. Each episode offers a surprising look at the impact of seemingly simple discoveries and ideas, following the thread through history. We talked to Johnson about the show, and innovation.

Popular Science: What got you interested in writing about innovation?

Steven Johnson: In all of my previous books, I wrote about new ideas in brain science, new ideas in popular culture, video games, in complexity theory and complexity science, and I realized that I was interested in new things that are coming into the world, and the people that are bringing them into the world. And the historical focus, which we have in the show and the book, came out of the fact that, we don’t tell this kind of history enough. We tend to tell history in broad movements, like the Civil Rights Movement, or big political figures—presidents or kings—or major military conflicts. But I think it’s just as important to tell our history though the lens of technologies and breakthroughs in science and our understanding the world, that have shaped our lives every bit as much as great leaders or great battles.

PS: How do you go about mapping historical innovation?

SJ: It’s really hard, and it’s kind of different each time. For instance, there’s a story in there about the ice train. That enabled refrigerator rail cars for the first time—they would just stick blocks of ice on the top of these refrigerator rail cars, which enabled Chicago to ship frozen meat to the east coast for the first time. They couldn’t keep the meat from spoiling until they had these ice refrigerated cars. So it was the ice that enabled Chicago to turn into the classic slaughter house, stockyards, beef trading hub that it became in the end of the 19th century. This helped transform the entire midwest, which converted the plains into these semi-industrial feed lots for cattle. Without those blocks of ice, none of that could have happened until they invented artificially air conditioned rail cars 30 and 40 years later. This story was something that we kind of knew. But it wasn’t until late in the process that I realized, I’ve got to go read the whole history of Chicago to figure this out. So I did, and I realized that in fact, they were really hamstrung until had ice cars, they really couldn’t couldn’t ship meat at all. That suggested to me the impact it had on the actual physical layout of the great plains after Chicago became such a hub for cattle. It’s like detective work. You get one little clue somewhere, someone says something in passing, and then you trace down where that came from, and then finally get the broader story. It’s because people normally don’t tell history this way, that you have to do all the detective work. It’s not the traditional way of telling the story of Chicago. Some guy in Boston decided to make a fortune selling blocks of ice and then modern, industrial Chicago was invented. If you look at it for those chains of influence, it’s just as accurate as the traditional telling.

PS: Where is all of this innovation coming from?

SJ: We really tried to tell a lot of stories about people who were almost like amateurs in some way, who were just really interested, had a passion, had a dream, and decided to follow it. Even though they didn’t necessarily have official credentials, in a way, they’re hobbyists. For instance, John Snow, in the Clean episode. He solved the riddle of cholera. He was just a local doctor, but he got interested in this problem of what was making people sick because he was treating them. And he decided to investigate on his own, and through his detective work, he ends up solving one of the big medical mysteries of the time. It’s harder to do that now in today’s age, since we’ve solved a lot of the simpler problems. You have to have more of an education and more training than you used to, but we also have more information available to us thanks to the Internet. The figure of the hobbyist and outsider who comes up with a great idea, or a great new invention. That’s something we’re really trying to celebrate in the show.

PS: What do you want viewers to take away from the show?

SJ: A couple of points: We really tried to shift the focus in terms of what we talk about when we talk about innovation. Innovation is a really trendy word—everybody talks about innovation in the State of the Union and the million tech conferences centered around it. But so much of the current conversation about innovation is focused on Silicon Valley, and who is the latest billionaire that started a social media app, and what the next iPhone is going to look like. And all that is great, and I love all that stuff, and we celebrate some of that. But mostly what we tried to do is focus on these other kinds of technologies and breakthroughs. So people think about the iPhone as an innovation, but they don’t think of clean drinking water as innovation. The fact that most of us in the developed world can drink all day from the tap and not worry about dying 48 hours later of cholera, that is so much more miraculous than the fact that can text a picture from my son’s summer camp back home a few hours away. If I had to choose between one or other, I would always choose clean drinking water that doesn’t kill me.

We really wanted to remind people that there is a whole range of kinds of innovation in our lives, and we should appreciate these other ones, in part, because it’s good to appreciate them and it’s good to tell stories and tell history this way. But the other reason is to inspire the next generation of innovators so people aren’t just trying to create next social media app, but they’re also going out and trying to solve the new problems that we have. We have these new problems involving energy, food, hygiene, and we’ve got a whole host of new solutions we’re going to need. I want these stories to get people excited about trying to solve this.

PS: Are there things in your daily life you wonder about and research?

SJ: Well, clothing in general is really pretty amazing. I’ve been researching the whole story of cotton, which is an incredible story. Cotton first took off in England and France in the 1600s. When people first started to experience it, as opposed to linen and wool, one of the big things that was central to it was people would wear it as undergarments. They would wear wool, because it was cold, but have now they suddenly have these cotton products they can wear under that. And they were like, “Oh my gosh! This is so much nicer.” That created this craze for the fabric. And it literally set in motion these absolutely globally transformative events: The Industrial Revolution was all driven by cotton, the slave trade had to do with cotton, vast fortunes were made, the British empire in India was hugely driven by cotton. So you can look back on this, and say, without really joking about it, the single most transformative series of events of the 1700s and early 1800s were triggered by a new kind of underwear. It’s not a joke, it sounds like a joke.