A multicolored mouse eye, the macro-scale universe, alien slugs on the face of a baby cucumber — all these images... A multicolored mouse eye, the macro-scale universe, alien slugs on the face of a baby cucumber — all these images accomplish a pretty impressive feat: They look awesome, and they can teach us something about the world we live in and our place in it. They are among the winners of the 2011 International Science and Engineering Visualization Challenge, sponsored by the journal Science and the National Science Foundation. Check out our gallery of some of the winners.

The competition, now in its ninth year, honors photographers and illustrators who use their skills to promote understanding of science and new research. There were 212 entries from 33 countries, according to the American Association for the Advancement of Science, which publishes Science.

Some of the highlights include a deep magnification of cucumber skin, with its closely arranged trichomes on the surface. Did you know that an immature cucumber had these points, each 40 times thinner than a sewing needle? We did not, but apparently the plants have evolved these distal points to thwart herbivores that would eat the veggies before they are fully grown. The points can “penetrate the mouthparts of herbivores,” according to the challenge, which awarded an honorable mention to a photo of these points.

Other winners include a map of the cosmos, a zoomed-in view of the human hand, a 3-D depiction of mitosis, and much more. Click through to the gallery to see some of our favorites. At first glance, it looks like this could be a microscopic image of tree bark or seashell; or it might be a cluster of blood cells in the body. But this evocative image depicts the grandest scales of all — streams of matter delineating the network of cosmic voids, each tens of millions of light years across. Matter accumulates where the voids meet, forming a cosmic web of walls, filaments, and clusters of galaxies. This illustration was awarded first place in the informational graphics category in the 2011 Science/NSF International Science & Engineering Visualization Challenge. 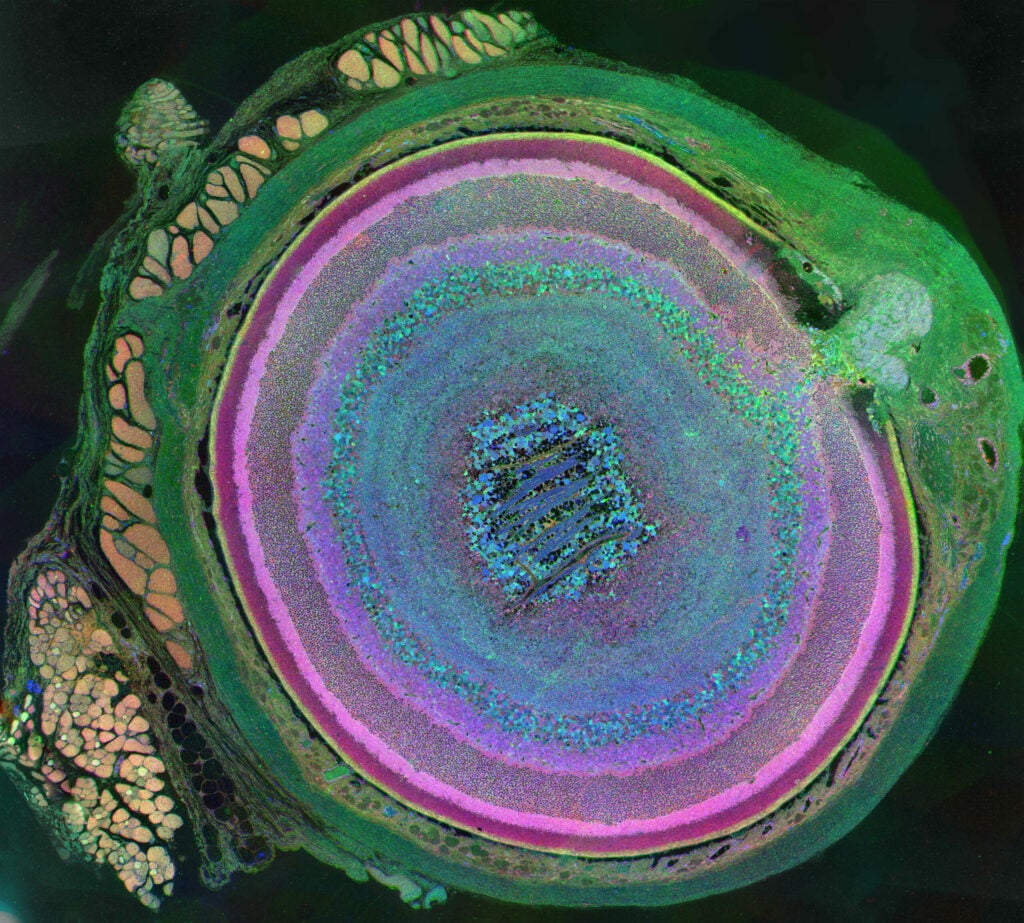 This is a metabolic snapshot of the diversity of cells in a mouse eye, and the first-place winner for photography in the 2011 International Science and Engineering Visualization Challenge. The image was derived using a technique called computational molecular phenotyping (CMP). The optic nerve head can be seen in the upper right portion of the image with the rectus muscles (red/gold) attaching to the sclera (green) on the upper left portion, and an oblique muscle in the lower left. Concentric rings of retinal layers are then represented from the sclera through to the vascular choroid to the optic fiber layer. 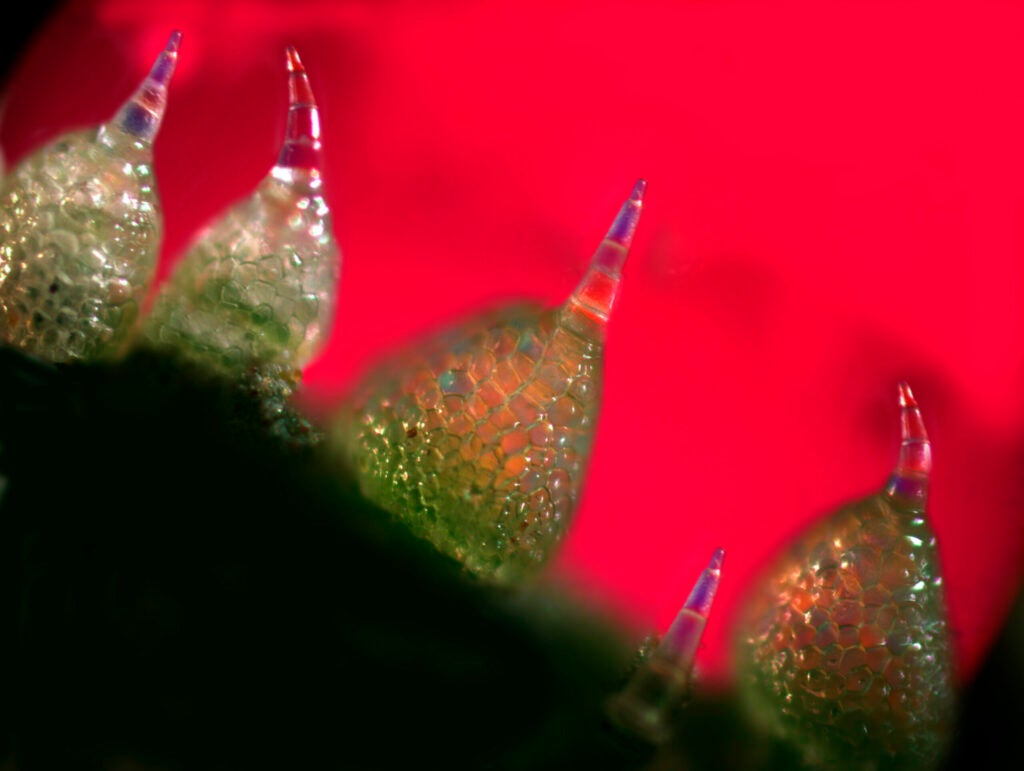 This microscopic image (magnification 800X) shows the skin of an immature cucumber. Fruits and vegetables are most vulnerable to predators when they are immature, and cucumbers have developed two mechanisms to protect themselves against herbivores. The first is to grow closely arranged trichomes on their outer skin. The trichomes’ sharp distal points are 40 times thinner than a sewing needle and can penetrate either the bodies or mouthparts of herbivores. The second is the development of toxic and bitter substances called cucurbiticins that repulse or kill invaders. Cucurbiticins are the most bitter substances known. Humans can detect them even when they are diluted to one part in a billion. 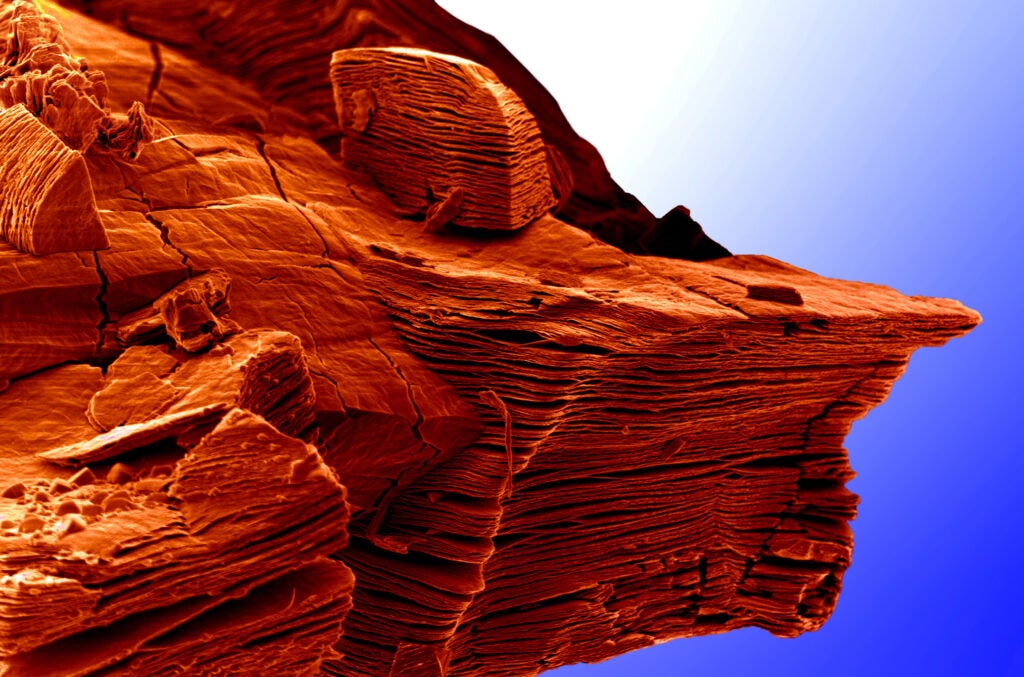 Photography People’s Choice – The Cliff of the 2-Dimensional World

When the layered compound Ti3AlC2 is placed in hydrofluoric acid, the aluminum layers are selectively etched away, resulting in two-dimensional layers of Ti3C2 weakly bonded to each other. This image shows a number of these particles where the aluminum exfoliation is obvious. Like with graphene, individual layers of this titanium-carbon compound can be isolated so their properties can be explored. Ti3AlC2 is a member of a large family of layered solids called MAX phases. Given its similarities with graphene, the scientists who took this image nicknamed the family of 2-D solids “MXene.” This image was chosen to represent a new frontier – that is only visible from the cliff – in the world of 2-D materials. 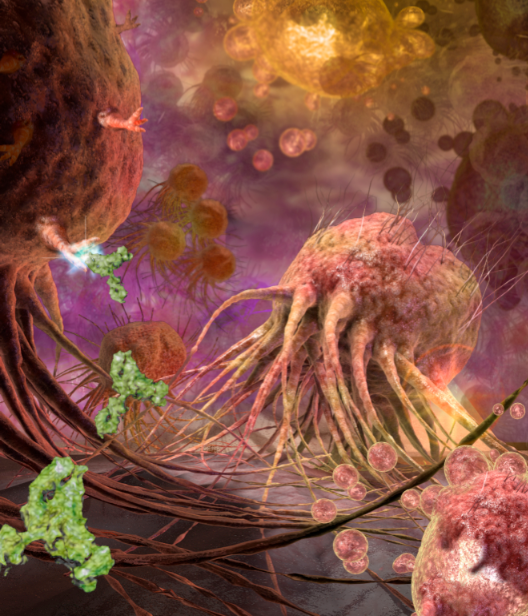 This illustration shows tumor death-cell receptors on breast cancer cell surfaces targeted by the monoclonal antibody TRA-8, which was developed at the University of Alabama, Birmingham School of Medicine. 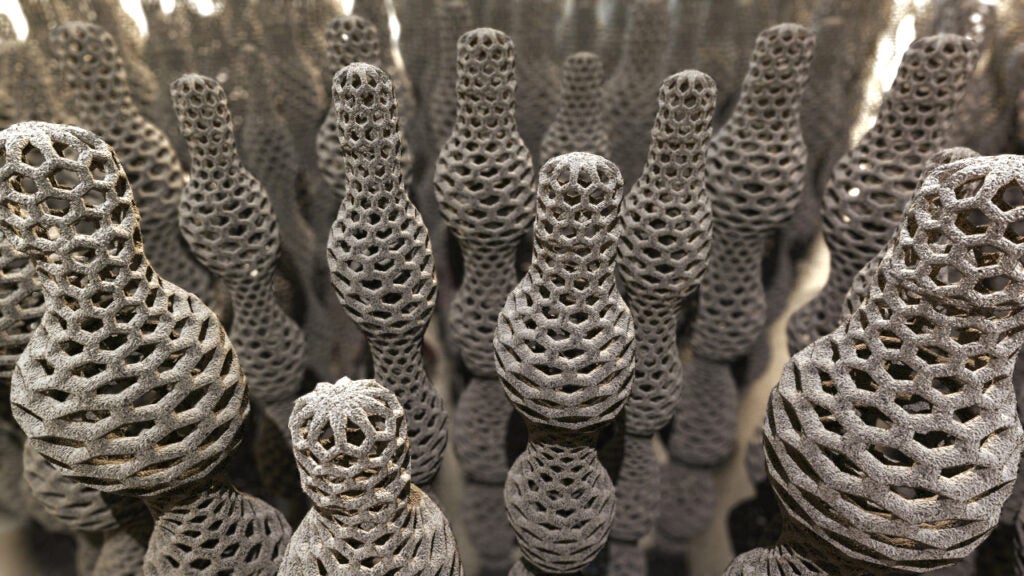 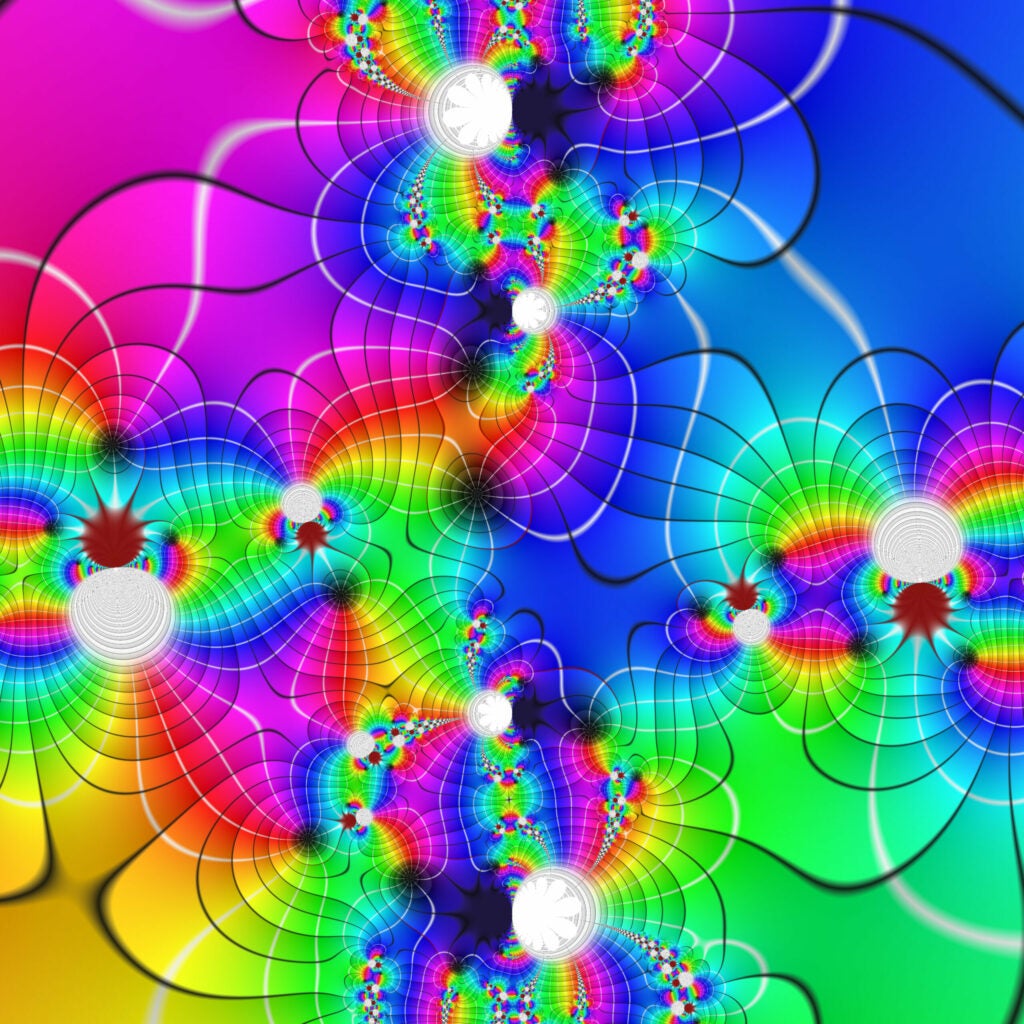 Complex functions are important in many areas of mathematics, physics and engineering. A complex function is one in which both variables are complex numbers. The picture shows the visualization of a complex function using a specifically designed color scheme. Following a technique called ‘domain coloring,’ the color scheme assigns a certain color to every complex number, inducing a coloring of the function domain according to its values at every point. So using this picture, you can explore properties of the function by easily spotting zeroes (black spots) or singularities (white spots). Contour lines indicate how the function deforms the complex plan. 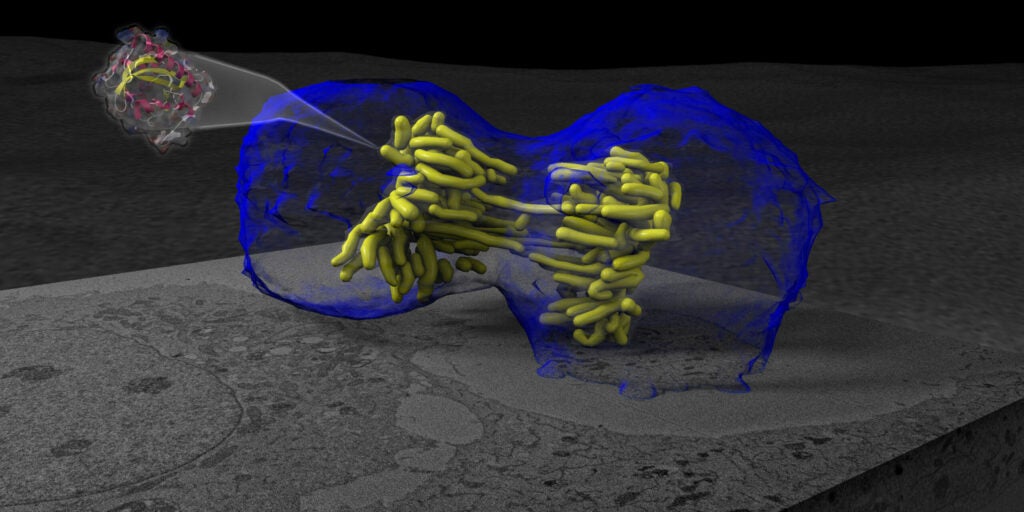 This is a cell undergoing mitosis. The cell membrane is shown in blue and the cell’s chromosomes in yellow. Mitosis is a well-studied and well-imaged phenomenon in 2-D images, but what makes this image special is the use of a special new fluorescent protein called MiniSOG, shown flying out of the cell. MiniSOG promises to do for electron microscopy what green fluorescent protein did for light microscopy, by allowing scientists to target certain structures then see them clearly under electron microscopes. Here MiniSOG has been tagged to another protein, H2B, to bind to DNA. The division data was reconstructed using 3D Serial Block-Face Scanning Electron Microscopy (SBFSEM), wherein the specimen is repeatedly cut then imaged, then traced to produce the 3D image you see here. 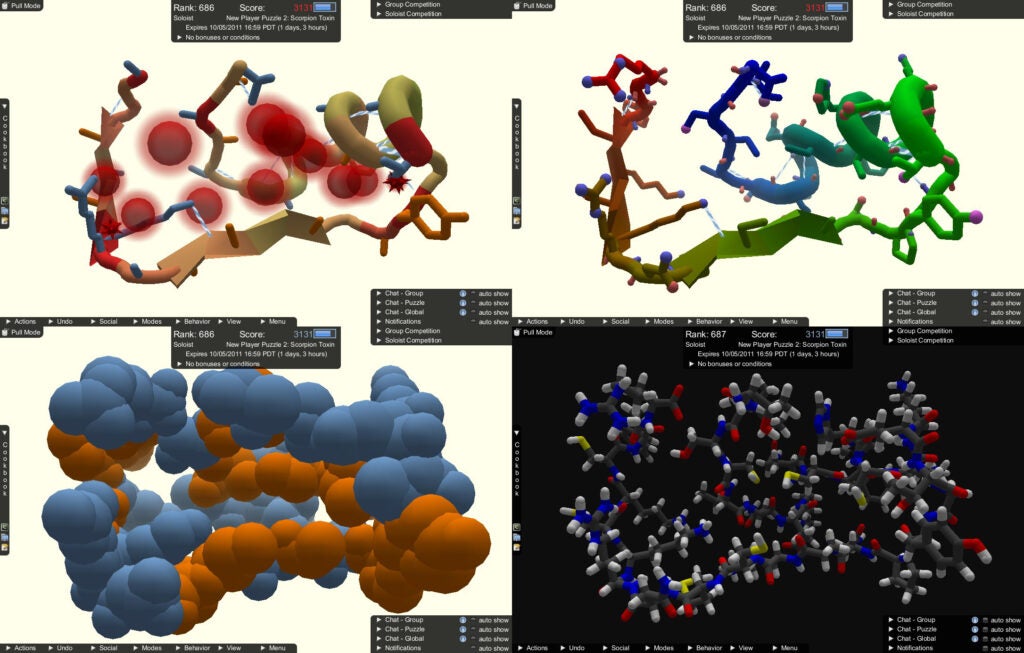 By learning more about the 3D structure of proteins (or how they ‘fold’), we can better understand their function. This could help scientists fight diseases, create vaccines, and even find novel biofuels. In Foldit, players are presented with a model of a protein, which they can fold by using a variety of provided tools. The game evaluates the fold’s quality and provides a score, which is uploaded to a leaderboard, allowing for competition between players from around the world. Foldit proved it is possible to effectively ‘crowdsource’ human problem solving to answer very difficult scientific problems. Foldit results have been published in Nature, which credited the game’s thousands of players as co-authors. 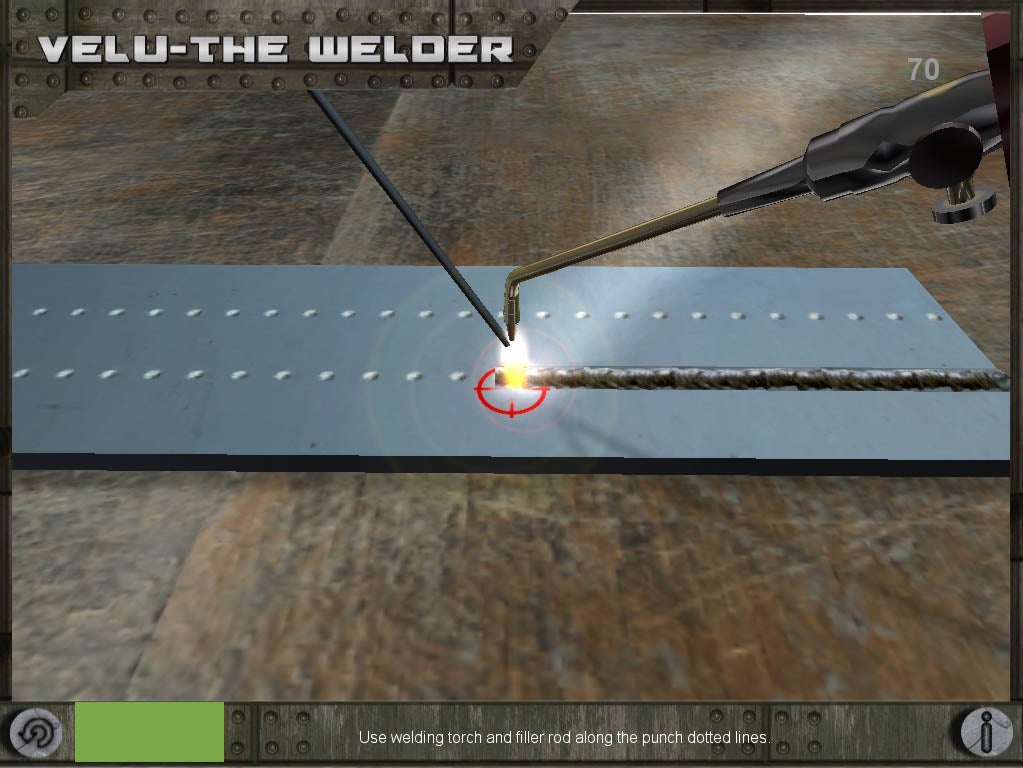 In this game, an apprentice named Velu gets basic training in the art of welding. The game is designed to expose players to basic skill sets involved in the craft of welding. Developed as a technology demonstrator for the National Skills Development of India, this game will be used to train millions of apprentices in a cost-effective way. The game is best played using a Nintendo Wii Remote, which serves as the welding gun. 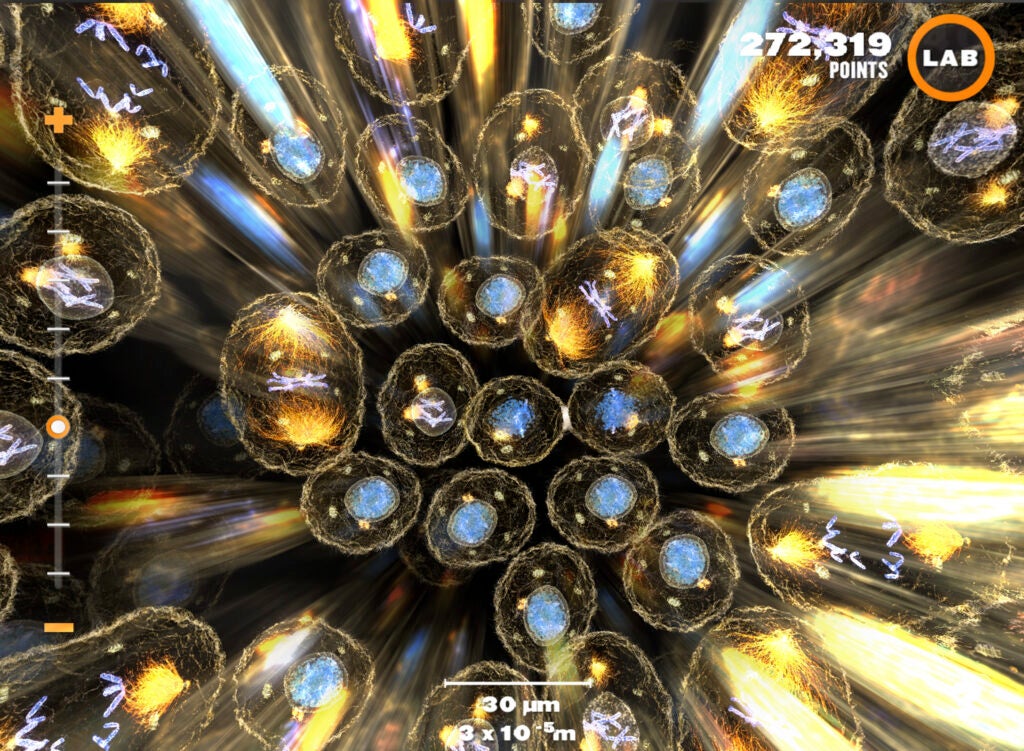 Conceived as an iPad app, Powers of Minus Ten (POMT) allows users to zoom into the human body, exploring worlds at different levels of magnification (e.g. tissue, cellular, molecular, subatomic). In this version of POMT, the user is able to zoom into the human hand down to the molecular level. Users can also investigate structures in the ‘Lab’ area of the app, and review what they have discovered via timed mini-games. Future versions will allow players to explore different subjects, like plants, minerals, water droplets and so on, as well as to explore ‘deeper’ at the atomic and subatomic levels of magnification.