Doing the kessel run in 12 parsecs with a quadcopter 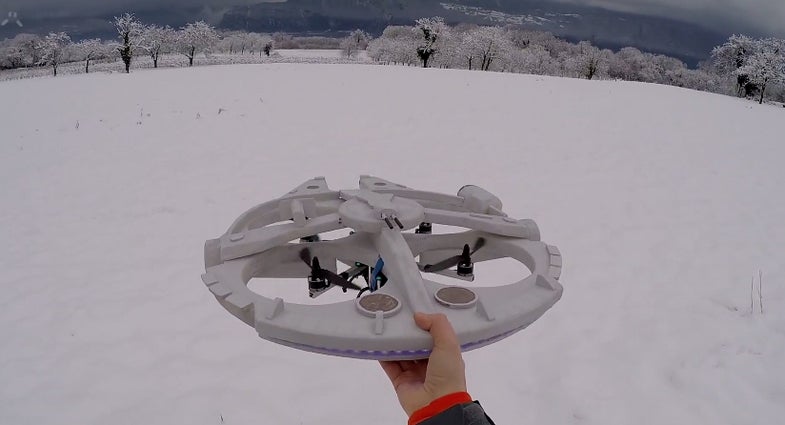 How does a hobbyist make their drone stand out from the sea of identical quadcopters? Dress it up like it’s got stolen goods inside and the Galactic Empire is on it’s tail, of course! Drone enthusiast Olivier C outfitted his custom quadcopter with a homemade body to make it look like the Millennium Falcon.

Olivier posted step-by-step instructions to both Reddit and Imgur on how to make this “bucket of bolts.” Olivier started with a custom drone body, and then cut the basic shape of the falcon from expanded polystyrene insulation foam. After making sure the frame fit over the drone without rotors thwacking into it, Olivier set about to detail the body. He even included a rectangular antenna to match the one on the Millennium Falcon, as seen in the trailer for the upcoming Star Wars: The Force Awakens. (The circular antenna dish was lost in the assault on the second Death Star in Return of the Jedi.)

To make it easier to see the drone, and because it looks rad as heck, Olivier installed LED lights, both to the front of the Falcon and along the entire curved length of the ship’s thruster in back. The project was finished up with a paint job, and suddenly a science fiction spaceship became a remote-control toy.

Watch it fly at night below:

And, reminiscent of the Rebel’s evacuation from Hoth, watch it fly over snow below:

The lights and the weight of the frame mean that, as cool as this drone is, it can only fly for about 5 minutes before its batteries need recharging. So don’t expect it to do any actual smuggling anytime soon.