Parts Of Your Brain Go Berzerk On Microsleep

Here's what happens when you're exhausted, but trying to stay awake 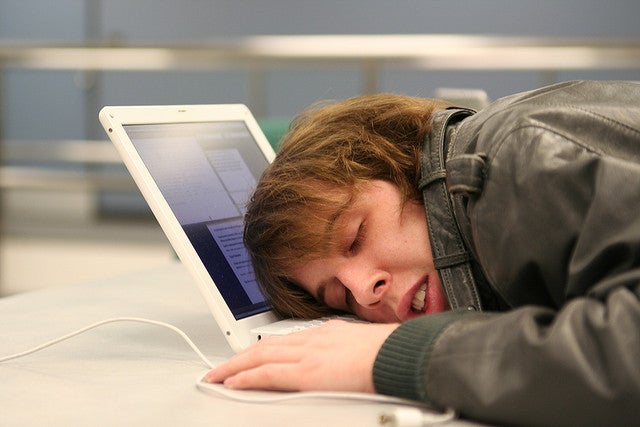 If you try to function normally after you’ve pulled an all-nighter, your eyes start to drift shut no matter how much you try to keep them open. But what happens in the brain during those all-too-few blissful seconds of rest? While some parts of the brain behave the same way they would if you were settling in bed for the night, other areas reflect the unique tug-of-war between sleep and wakefulness, according to a paper published recently in the journal Neuroimage.

In the study, the researchers kept 18 volunteers awake in the lab for a lengthy 22 hours. Then they put these very tired individuals in a dark, warm fMRI machine and told them not to fall asleep. Of course, their eyes did close periodically—and the scanner was able to pick up what happened in their brains when they did. If their eyes closed, the participants were quickly urged to open them again by recorded audio messages. To make sure the results didn’t simply come from the eyes closing, the researchers compared these sleepy scans to those of well-rested people just closing their eyes.

When the sleepy participants’ eyes closed in “microsleep,” a.k.a. dozing, the researchers saw reduced activity in the thalamus, the part of the brain responsible for relaying sensory and motor signals to other parts of the brain. The thalamus is also responsible for regulating sleep (and the same effect was found in the scans of rested participants) so this part isn’t very surprising.

But more surprisingly, the researchers saw increased activity in the parts of the brain associated with sensory processing, which could account for the vivid images that seem to spring up when you first drop off to sleep. The researchers also observed more activity in the frontal parietal lobe, responsible for helping you pay attention, likely as a result of the brain’s attempt (and failure) to obey the “stay awake” command.

While this research may not help you stay awake better after a sleepless night, it could help scientists better understand the sleeping brain and the constant struggle between the conscious and unconscious brain.