As seen in Popular Science, December 1928 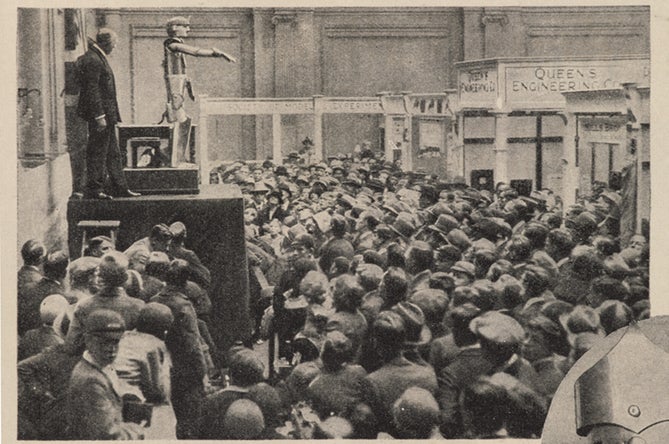 A new Kickstarter campaign by London’s Science Museum is raising funds to rebuild Eric, the UK’s first robot. Eric, built in 1928, was written about in the December issue of Popular Science that year. Eric was able to stand up and sit down, bow, walk, and move its limbs.

“Ingenious electrical instruments (a jealously guarded secret of his inventor) enabled Eric to hear questions and answer in a human voice, ” we wrote.

According to museum curator Ben Russell, Eric was “everything you expect a robot to be. He was a walking, talking man of steel.” Eric’s first public appearance was at the 1928 Model Engineering Exhibition, which he opened by speaking and bowing to the audience. Russell goes on to say that Eric was “quintessentially British” and “deemed an almost perfect man by the New York press.”

At some point though, Eric disappeared and has never been found.

The Science Museum has teamed up with roboticist Giles Walker to rebuild Eric using “original archive materials.” According to the Kickstarter page, it will take Walker three months to rebuild Eric.

If the project reaches its goal of £35,000 ($50,471 USD), Eric will become a part of the Science Museum’s permanent collection. He’ll also go on display for free in October 2016, before joining the museum’s Robots exhibit, which will run from February through September 2017. Russell also hopes to bring Eric on an international tour, similar to the journey he went on nearly a century ago.

You can learn more about Eric or donate to the project on the Science Museum’s Kickstarter campaign page.