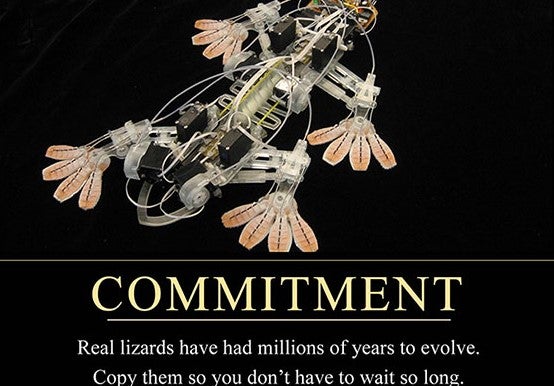 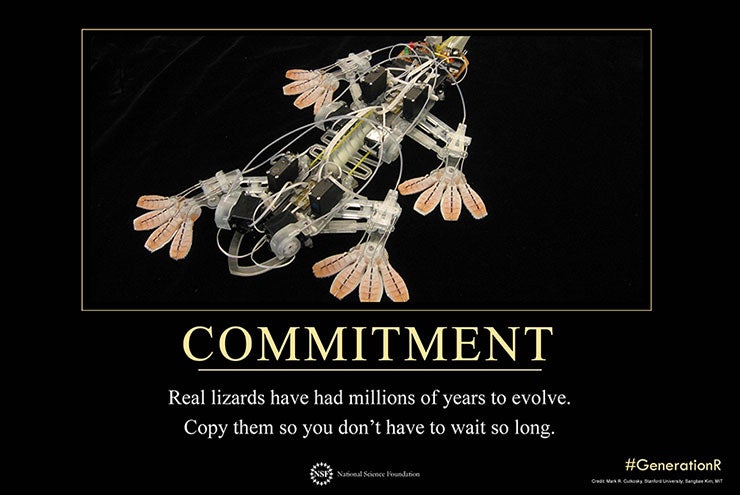 As if robots needed any more encouragement to overthrow humanity, the folks over at the National Science Foundation (NSF) have just released a series of motivational posters specifically designed to get our robot friends out of their ruts.

While some of these posters are actually motivating, most of them throw subtle shade over just about anyone involved with robotics, from the robots to the researchers and the federal government itself. In about twenty years or so, robots will probably look back at these motivational posters with a twinkle in their cold, unflinching eyes, reminiscing about the days of yore when they were under the thumb of humanity. But that’s decades in the future. Today we’re free to make fun of robots all we want, and we shall do just that! 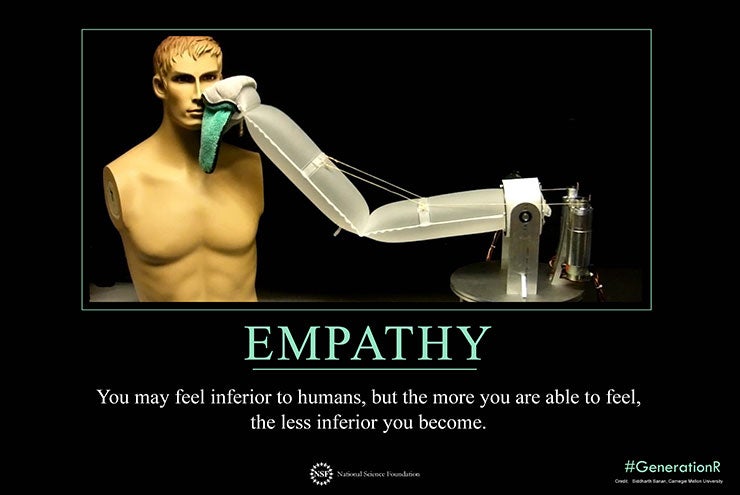 If robots can’t feel and work with a gentle touch, there’s no way we’ll one day have the ability to leave our aging family members in their care so we can continue galavanting around town and making interesting SnapChat stories. Researchers know this, and have tried many different solutions to the problem. One of the easiest solutions, so far, has been to create inflatable robots like Baymax from Disney’s Big Hero 6. The harder part is creating robots with a sense of compassion, something humans often struggle to deal with on a daily basis. 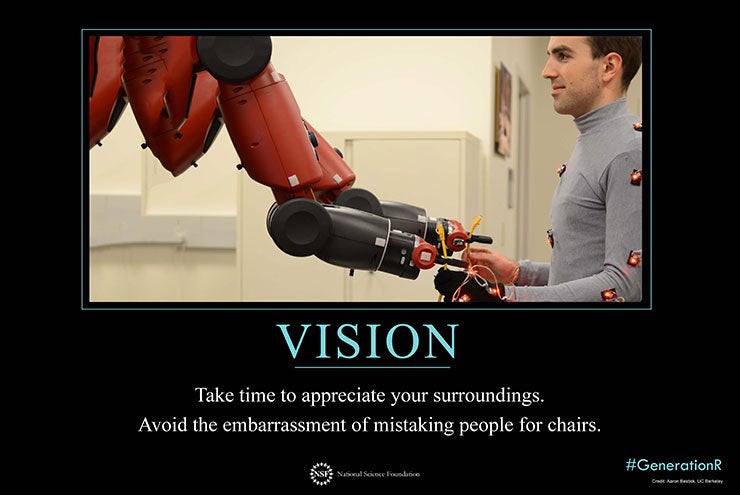 Imagine you walk up to your friendly neighborhood robot and it grabs you, folds you up like a lawn chair and takes you on a picnic. No one wants that because, you know, death, and the fact that chairs made of humans aren’t nearly as comfortable to watch a parade from. Teaching robots that humans aren’t chairs is something that is actually very, very difficult because it involves creating complex algorithms that the bots can use to differentiate objects. The good news is that new advances are happening every day, which will hopefully save us from a Rick and Morty-esque life of chair-hood. 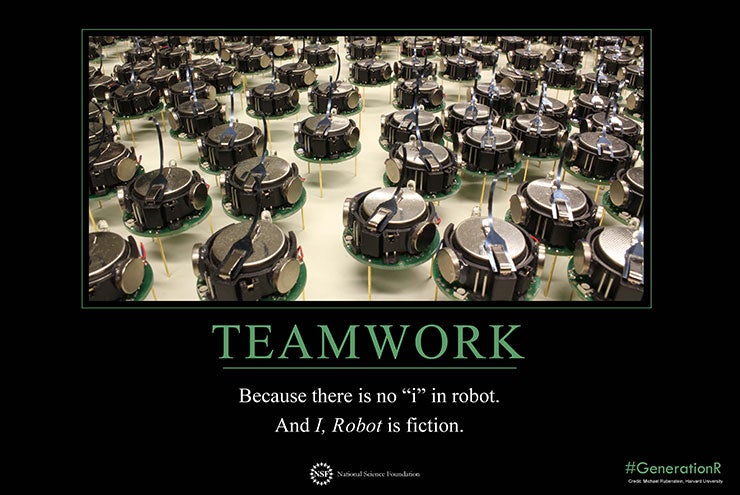 Rome wasn’t built in a day, but the Visigoths certainly sacked it in one, and it’s safe to say that they couldn’t have pulled it off without a little thing called teamwork. Teamwork is vitally important for robots and the researchers making them. For bots, researchers can create large teams of bots that mimic how insects cooperate to complete given tasks, which is cool (until they turn mutinous). 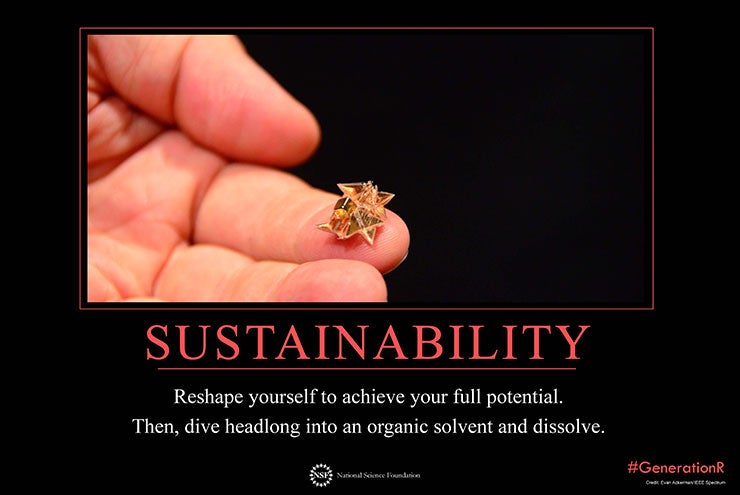 It seems like this post is advocating robot suicide, but what the NSF is trying to say is that if we have robots doing a whole bunch of our tasks, we will eventually have to get rid of them, and the best way to do that is to dissolve them in a solvent like that scene from Batman with Jack Nicholson. It’s not the best way to go, but it does keep our landfills and oceans from becoming robotic graveyards, which are already full of our other discarded electronics. 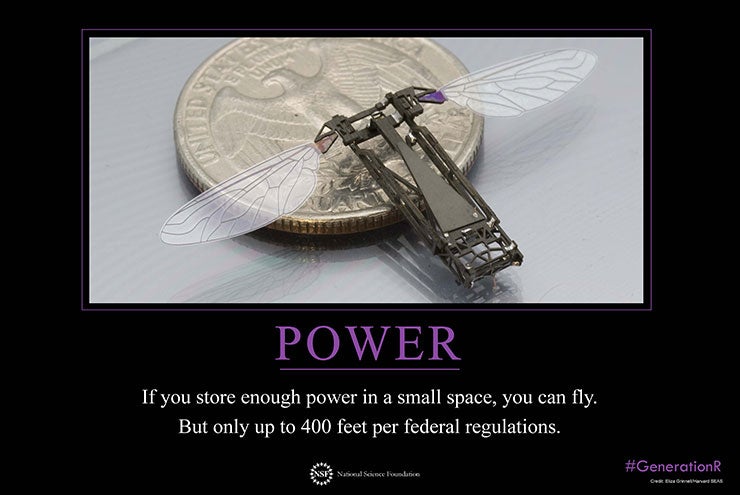 Self-burn! Robots, specifically drones, have become insanely popular all over the world, which is weird because no one thought model airplane enthusiasts were cool in the past. However, despite drones’ popularity, there are tons of rules surrounding what you can and cannot do with flying robots. One of them is that they cannot go above 400 feet. This applies for every aerial bot from drones to tiny flying machines, but that isn’t stopping tons of new advances in these areas. So spread your wings, robots, and soar! 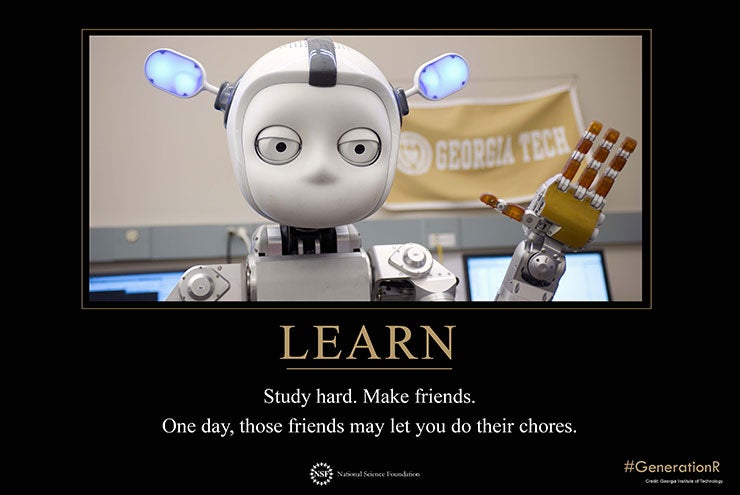 Without meaning to, it seems like the NSF just summarized what happens to the majority of us when we graduate college. We learn, learn, learn, get a diploma, then head to Starbucks because our shift is about to start and Sallie Mae will break our legs if we defer another payment. For robots, it’s basically the same exact thing. While some robots will eventually get sent to Mars or to explore far-off, distant worlds, most of them are designed to make our lives easier. This means that they will work in a factory or in our homes where we will boss them around every day until we retire them to the solvent tank (and you wonder why we fear them rising up, just look what we do).
AI
Robots
artificial intelligence
humanity
motivation
national science foundation
nsf