This unique development matches blood flow in the body, making it incredibly useful for biomedical advances. 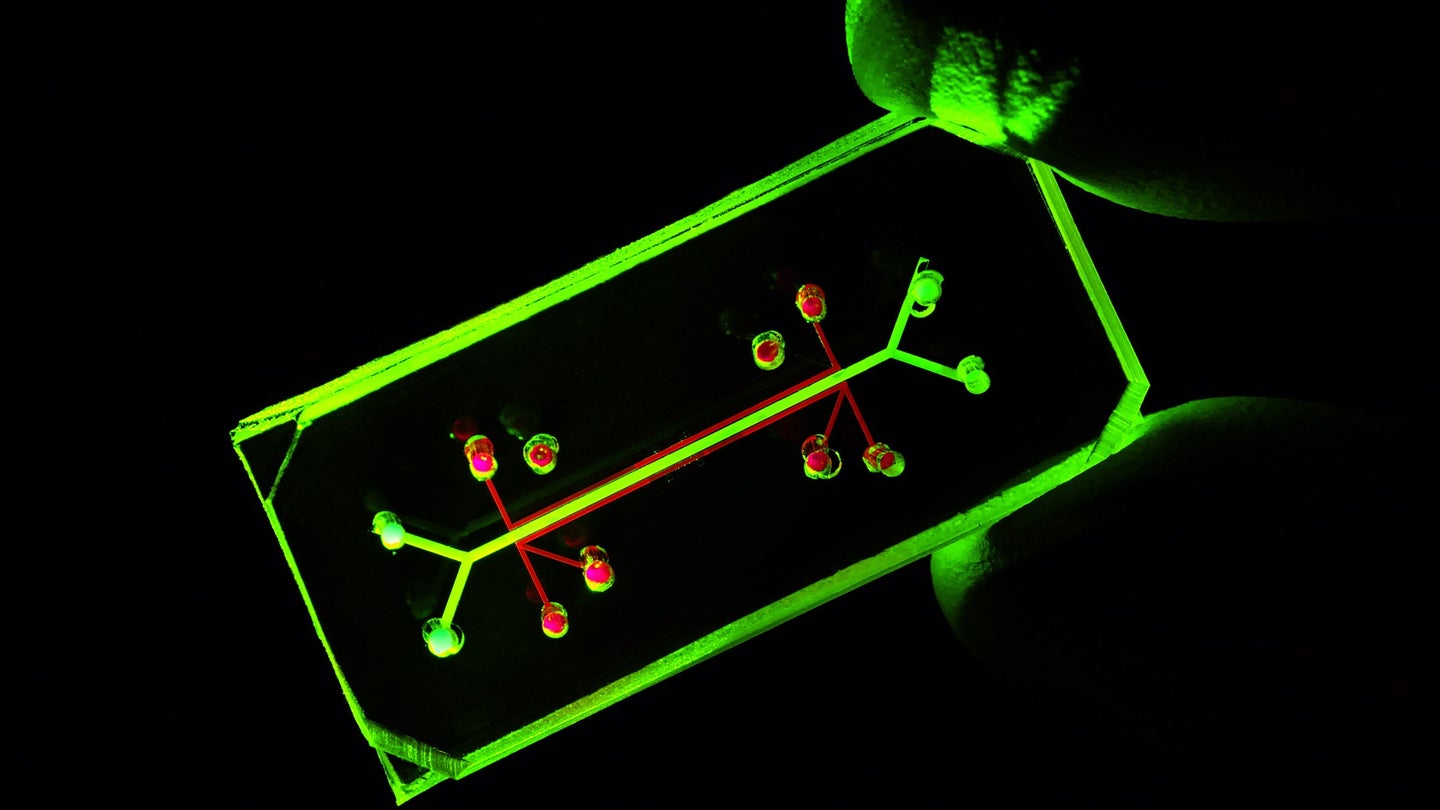 This lung-on-a-chip serves as an accurate model of human lungs to test for drug safety and efficacy. Wyss Institute for Biologically Inspired Engineering, Harvard University
SHARE

This article was originally republished from The Conversation.

Bringing a new drug to market costs billions of dollars and can take over a decade. These high monetary and time investments are both strong contributors to today’s skyrocketing health care costs and significant obstacles to delivering new therapies to patients. One big reason behind these barriers is the lab models researchers use to develop drugs in the first place.

Preclinical trials, or studies that test a drug’s efficacy and toxicity before it enters clinical trials in people, are mainly conducted on cell cultures and animals. Both are limited by their poor ability to mimic the conditions of the human body. Cell cultures in a petri dish are unable to replicate every aspect of tissue function, such as how cells interact in the body or the dynamics of living organs. And animals are not humans – even small genetic differences between species can be amplified to major physiological differences.

Fewer than 8% of successful animal studies for cancer therapies make it to human clinical trials. Because animal models often fail to predict drug effects in human clinical trials, these late-stage failures can significantly drive up both costs and patient health risks.

To address this translation problem, researchers have been developing a promising model that can more closely mimic the human body – organ-on-a-chip.

As an analytical chemist, I have been working to develop organ and tissue models that avoid the simplicity of common cell cultures and the discrepancies of animal models. I believe that, with further development, organs-on-chips can help researchers study diseases and test drugs in conditions that are closer to real life.

In the late 1990s, researchers figured out a way to layer elastic polymers to control and examine fluids at a microscopic level. This launched the field of microfluidics, which for the biomedical sciences involves the use of devices that can mimic the dynamic flow of fluids in the body, such as blood.

Advances in microfluidics have provided researchers a platform to culture cells that function more closely to how they would in the human body, specifically with organs-on-chips. The “chip” refers to the microfluidic device that encases the cells. They’re commonly made using the same technology as computer chips.

Not only do organs-on-chips mimic blood flow in the body, these platforms have microchambers that allow researchers to integrate multiple types of cells to mimic the diverse range of cell types normally present in an organ. The fluid flow connects these multiple cell types, allowing researchers to study how they interact with each other.

This technology can overcome the limitations of both static cell cultures and animal studies in several ways. First, the presence of fluid flowing in the model allows it to mimic both what a cell experiences in the body, such as how it receives nutrients and removes wastes, and how a drug will move in the blood and interact with multiple types of cells. The ability to control fluid flow also enables researchers to fine-tune the optimal dosing for a particular drug.

The lung-on-a-chip model, for instance, is able to integrate both the mechanical and physical qualities of a living human lung. It’s able to mimic the dilation and contraction, or inhalation and exhalation, of the lung and simulate the interface between the lung and air. The ability to replicate these qualities allows researchers to better study lung impairment across different factors.

While organ-on-a-chip pushes the boundaries of early-stage pharmaceutical research, the technology has not been widely integrated into drug development pipelines. I believe that a core obstacle for wide adoption of such chips is its high complexity and low practicality.

Current organ-on-a-chip models are difficult for the average scientist to use. Also, because most models are single-use and allow only one input, which limits what researchers can study at a given time, they are both expensive and time- and labor-intensive to implement. The high investments required to use these models might dampen enthusiasm to adopt them. After all, researchers often use the least complex models available for preclinical studies to reduce time and cost.

Lowering the technical bar to make and use organs-on-chips is critical to allowing the entire research community to take full advantage of their benefits. But this does not necessarily require simplifying the models. My lab, for example, has designed various “plug-and-play” tissue chips that are standardized and modular, allowing researchers to readily assemble premade parts to run their experiments.

The advent of 3D printing has also significantly facilitated the development of organ-on-a-chip, allowing researchers to directly manufacture entire tissue and organ models on chips. 3D printing is ideal for fast prototyping and design-sharing between users and also makes it easy for mass production of standardized materials.

I believe that organs-on-chips hold the potential to enable breakthroughs in drug discovery and allow researchers to better understand how organs function in health and disease. Increasing this technology’s accessibility could help take the model out of development in the lab and let it make its mark on the biomedical industry.