With a larger screen and 400,000 more titles, iRex's DR800SG forces a standoff against the Kindle and the Sony Reader 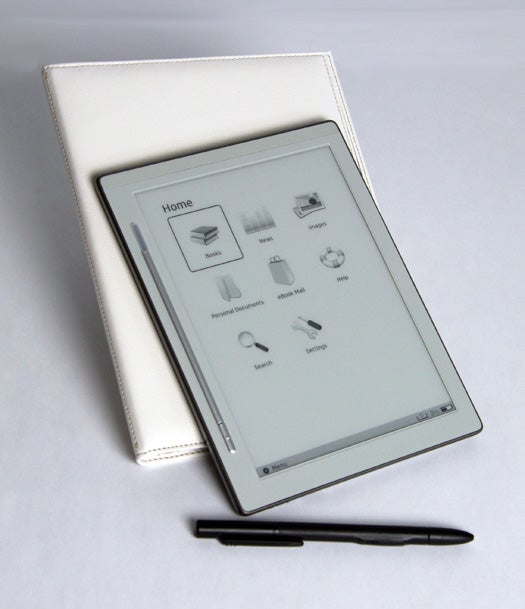 Barnes and Noble first tipped their hand in July, when they announed their new e-book store and its 700,000 titles would be made available on the iPhone and BlackBerry platforms. Then in August, the bookseller announced a partnership with e-reader maker iRex, in addition to love for Plastic Logic and their devices. And today (drumroll, please) the company officially announced the iRex DR800SG reader, the first e-book reader with access to the Barnes and Noble catalog.

The device has an 8.1-inch touch screen, enough memory for 1,500 books, and a broader catalog than its closest competition, the Sony Reader Daily Edition. In addition to the Barnes and Noble library (which, like Sony, includes half a million public domain titles via Google Books), iRex has partnered with NewspaperDirect and OverDrive. Just like on the Sony, OverDrive allows users to digitally borrow books from public libraries’ e-book collections for free. The iRex can also read ePub format books, PDFs, text files, and Fictionwise titles. There are currently no free public domain titles on the Kindle, and Amazon’s e-book library’s 300,000 volumes are aptly bested by Barnes and Noble’s, regardless.

The iRex connects the Web via a 3G cell connection over the Verizon network for wireless downloads, but its Gobi radio will one-up all its competitors by allowing for international connectivity . Users can adjust the display text size, and iRex also claims its black-and-white screen refreshes faster than the Sony’s.

The iRex DR800SG will be available at Best Buy for $400 at the end of October.