As is the case with everything from seat post to spokes, a helmet is never just a helmet in cycling.... 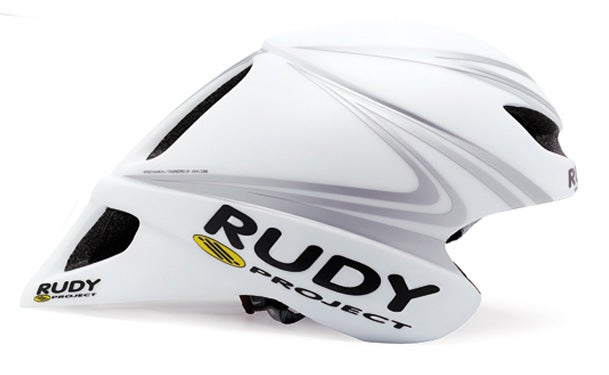 As is the case with everything from seat post to spokes, a helmet is never just a helmet in cycling. While football, baseball and hockey focus on comfort and protection, aerodynamic performance is paramount on the bike. High tech helmets promising to cut through the wind a millisecond faster are launched throughout a year, but the best is saved for the Tour de France. Say hello to the Rudy Project Wingspan Time Trial Helmet.

Rumors of the Wingspan hit the blogs after the Giro d’ Italia and the Dauphine Libere earlier this year, but Rudy officially announced the helmet to coincide with the start of the Tour, making some impressive claims.

At the heart of the helmet, which is intended specifically for time trial runs where every fraction of a second counts, is a new tail design developed in cooperation with industry guru John Cobb. Rudy Project claims the more aerodynamic shape resulted in between a six and thirteen second benefit over three competitors in a 40-kilometer test trial. The design intent was to provide similar performance for cyclists riding in the both “flat back” and “U-shaped” time trial riding positions which Rudy Project claims is unique. They won’t offer details on the testing protocols but notes it was conducted by the independent testing lab A2 Wind Tunnel.

The helmet is being used by German team Milram throughout the tour. In addition to the aerodynamic optimization, the Wingspan adds a level of versatility to help keep helmet clutter in the closet to a minimum. Vent covers in the front and rear are removable for triathlons but snap back in for time trials where aerodynamics trumps ventilation. Weekend warriors will have to wait till later this month to get their hands on a helmet, but pre-orders are being taken in three different color schemes for $299.99.