This Lensless Camera Is Never Out Of Focus

It creates images using only a fraction of the data a normal camera would. 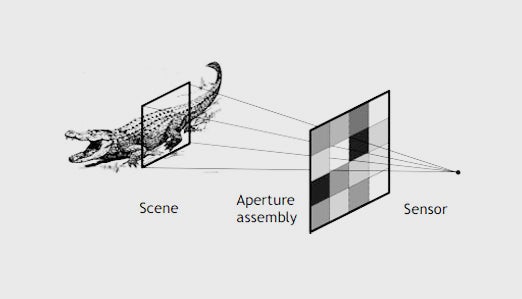 Researchers from Bell Labs in New Jersey have created a camera that operates without any lens, making it lighter, cheaper and immune to blurry, out-of-focus images.

The lensless camera relies on compressive sensing, a type of signal processing that uses algorithms to reconstruct images or signals based only a small sample of data. Instead of capturing a couple hundred pixels of, say, your perfectly crafted frittata, with compressive sensing, you would take a few pixels here and there and reconstruct the full image with an algorithm–kind of like turning an Impressionist painting into a photograph.

The Bell Labs camera, described in a paper here, uses only two components: an aperture array made of an LCD panel and a single sensor. By adding another sensor, it could also be used to take multiple images at the same time.

The lack of lens means the camera doesn’t need to be focused, and it can be made lighter and smaller. The image resolution depends on how many elements there are in the aperture assembly.

Each aperture in the LCD array is individually addressable and so can be open to allow light to pass through or closed. An important aspect of this kind of imaging is that the array of open and closed apertures must be random.

The process of creating an image is straightforward. It begins with the sensor recording the light from the scene that has passed through a random array of apertures in the LCD panel. It then records the light from a different random array and then another and so on.

While it uses only a fraction of the data a normal camera requires, the process takes longer to image a scene, so it’s really only useful for still-lifes right now.

In addition to the visible light spectrum, the prototype, built from low cost, off-the-shelf commercial parts, can capture images in infrared and millimeter waves. The inventors suggest that it could be used in surveillance, where the multi-image function could help determine the speed of objects or compare how a scene has changed.