From Tennis For Two to PlayStation 4. 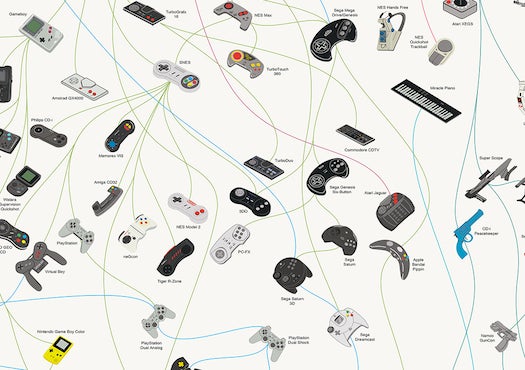 Today’s game controllers aren’t totally original. There was a long, generational evolution that got them there, as this incredibly comprehensive infographic from Pop Chart Lab shows.

The infographic groups the controllers by type–“handhelds,” “gamepad,” “touch”–but it’s also neat to look at the infographic as company history. Nintendo has been more experimental with its controllers than most (see the grouping to the left that includes the Power Glove controller down to the first Wii controller and beyond).

A surprise inclusion: The iPod Touch, which undoubtedly changed casual gaming but isn’t what you might think of as a “controller.” There’s also the PlayStation 4 controller we only recently got a look at, and isn’t quite on the market yet. Doesn’t get much more comprehensive than 1958 to sometime in the near future.

You can purchase a print here.