Broadcast Your Drunken Data To The World With A Smartphone Breathalyzer

Because what the world really needed was another way to post pictures of your inebriated tomfoolery. 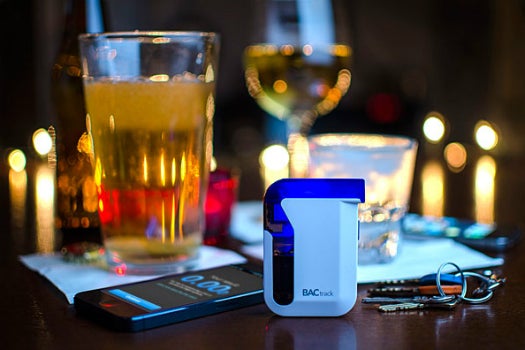 Whether you’re in a contest with your buddies over who’s the drunkest, or legitimately trying to determine whether your blood alcohol content is low enough to drive home (just take a cab, dude), personal breathalyzers can be pretty fun to whip out at a bar, at least for those of us obsessed with numbers. But perhaps it’s not enough of a social experience for the 21st century?

Enter the BACtrack Mobile, billed as “the world’s first smartphone breathalyzer”–though perhaps they missed this one that popped up a few months ago with the same claim. It’s really just a breathalyzer that can connect with your smartphone, though the San Francisco-based company that makes it claims “BACtrack Mobile simply is the world’s most intelligent breathalyzer.” But it does add the ability to post your BAC to Facebook.

Give it a blow and your blood alcohol content will be trasmitted through Bluetooth to your iPhone (or your iPad, if you want to be that guy at the bar). Data nerds can graph their drinking habits, while oversharers can describe their night in detail in the “personal drink diary” and compare their numbers with friends. It’ll even give you an estimate of when you’ll be returning to complete sobriety, despite the app’s warning that it shouldn’t actually be used to determine whether or not you can operate a vehicle. Even without the breathalyzer component, the free app will give you a rough estimate of what your BAC might be after knocking back three appletinis in an hour.

With four settings–personal, private, anonymous and social–you can choose whether to keep your activities all to yourself, share them with your designated driver (to prove you’re drunk enough to deserve a pick up, I guess?), post your drinking data anonymously to BACtrack’s world map or, on the social setting, upload the whole shebang, notes, pictures and all, to Facebook and Twitter. But sorry, Android-loving drinkers: This one’s just for the iCrowd.

Looking at the map, only three people in New York City have uploaded their data, and they were all distressingly sober. A few more have graced the world with updates on their alcohol choices in San Francisco.

At $150, you’re definitely making an investment in your drunkness. On the bright side, if you’re going to shell out for a breathalyzer, you might as well make it accurate. This one uses fuel cell sensors, the preferred breathalyzer tech used by law enforcement. The personal breathalyzers you can buy on the cheap online generally use semiconductor sensors that don’t give you as precise of a reading.

Though, do you really want to share the results of your breathalyzer test with all your friends and family? Just stick to Snapchat if you’re that into blurry selfies.