Why Crunching Data For Science Is the Future of Game-Playing 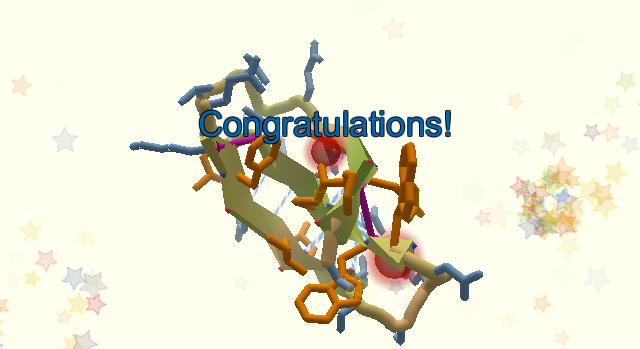 The other night I wanted to kill some time before “30 Rock” started, so I sat down and tried to build a strand of RNA. I clicked a yellow adenine avatar to turn it into peppermint-candy-shaped guanine, preparing to form a base pair. I moused over whole sections of my virtual molecule, switching bases and zooming in and out to ensure I kept the required shape as I formed more chemical bonds.

For now, for me, the computer game EteRNA is a fun diversion. But maybe someday, if I get really good, Adrien Treuille and his colleagues at Carnegie Mellon University will bring one of my RNAs to life, synthesizing it in a lab and checking whether it could lead to new drugs or new research in biotechnology. I would so love to find out. And this is exactly the point.

Across all disciplines of science, researchers are realizing that with some creativity — and an open mind — they can access entire armies of free helpers who will log in to online games and help them classify galaxies, solve puzzles or twirl virtual shapes, completing tedious tasks for them and generally enhancing their work. For the most part, these information games take advantage of humans’ natural proclivity for pattern recognition; we are simply better than computers at sussing out visible details. But future projects may go beyond puzzles or other visual tasks. Any problem can become a game, if you approach it the right way.

“If you think about it, you are able to increase the population of biochemists focusing on a specific problem by a factor of three or four,” said Zoran Popović, co-creator of Foldit, the protein-folding puzzle game at the vanguard of games for science’s sake. “If you could do a similar thing for all the problems that are facing humanity today, it would help not just science, but society at large, a huge amount.”

Already, there are so many examples: In Foldit, you twist virtual proteins around in search of optimal designs that use the least amount of energy, the way nature would want them. In Moon Zoo, you can zoom in on high-resolution pictures of lunar craters and flag weird rocks that NASA might look at again. You could listen to orcas on WhaleFM and match up similar-sounding calls. And let me tell you about Planet Hunters. Did you know you can classify the Kepler Space Telescope’s light data all by yourself, potentially finding a new exoplanet on your own?

Data games enable new questions about the way things work, and the way people think, that no one has asked before. Even DARPA is getting in on the action. The blue-sky research agency created a puzzle challenge last fall that asked solvers to piece together documents that had been shredded into more than 10,000 pieces. “Some at DARPA involved in the challenge did not think a solution could be found,” Daniel Kaufman, the Shredder Challenge project manager, said in an email. The winning team used custom-built computer vision algorithms to suggest puzzle pairings, and humans put them together. In total, the winning team spent nearly 600 man-hours developing algorithms and piecing together documents, beating DARPA’s deadline. DARPA is doing it again for other “wicked” problems, generally considered insolvable by conventional means. The first is a project called Crowd Sourced Formal Verification program, which seeks new games that will allow experts and novices to verify software code for DoD systems.

The possibilities seem endless, and they may indeed be, according to game creators like Popović and Treuille.

“All human tasks, certainly all knowledge tasks, are amenable to this kind of movement to the Internet,” said Treuille, who was part of the team that created Foldit and went on to create EteRNA (sounds like eternal). “In some sense, Foldit and EteRNA reflect a larger trend in which the Internet has dramatically broken down barriers in communication and expertise, and barriers for who gets to do what in society.”

There are benefits for the hard scientists here, too. The games are not only providing new answers; they’re also enabling new questions about the way things work, and the way people think and learn, that no one has asked before.

In EteRNA, players have discovered patterns — like a recipe for an RNA that works every time — that don’t fit with existing models of how RNAs work. “It’s like they’re discovering laws of nature,” Treuille said. And image-based games can shed light into human nature, too. Eric Fischer tracks location data to make sense of human motivations. He plots the locations of Flickr and Twitter photographs and has learned new insights into the way we live: People take vacations where they can walk around, but live where they must drive; and tourists and locals cluster in segregated areas. PopSci turned his geodata analysis of Flickr photos into a game, in which you guess whether photos of New York were shot by tourists or locals, and see if your assessment matches what the data predict.

Computer scientists like David Anderson are interested in how people learn online. In some ways, his research on SETI@home was the seed of this entire movement — a similar passive-computing project based on the SETI program was the genesis of Foldit. Anderson, a research scientist at the University of California-Berkeley’s Space Sciences Laboratory, built an active gaming project called Stardust@home after the Stardust spacecraft returned the first interstellar dust particles to Earth in 2006. UCB physicist Andrew Westphal and other investigators needed to make sure they found every dust grain, but there were 1.6 million images of the dust collector, and computers couldn’t search them well enough, Anderson recalled.

“We didn’t do it for novelty or publicity; it was critical to the scientific outcome. We needed to know with statistical confidence that we had found all of the dust particles that there were to find,” he said. In building Stardust@home, Anderson and Westphal realized they had to calibrate their volunteers, just like you would any instrument — there was a learning curve. They devised a system to check false positives against players’ real scores to come up with a confidence level. Ultimately, more than 25,000 volunteers signed up from across the globe, and devoted an average 40 hours of work. In 2010, an Ontario man found the first particles.

Anderson turned his Stardust@home calibration methods into an open framework for any type of data game, and he nicknamed it Bossa. Several scientists have approached him looking to develop their own data-analysis games, including a research team examining satellite imagery of the Brazilian rainforest. The goal is to identify forested and deforested regions and detect very early, within days or weeks, when new deforestation is happening, Anderson said. 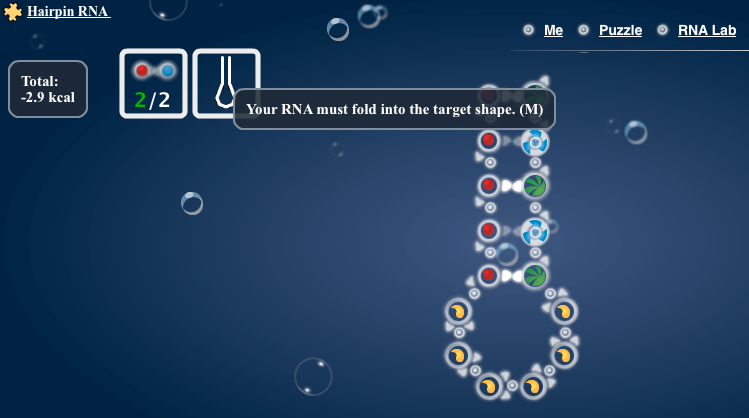 A simple RNA puzzle in EteRNA, an online game built by game developers and molecular biologists.

Foldit proved that distributed thinking done by collectives of online gamers can be more successful than distributed computing. But it requires more dedication and expertise than your average video game — Popović has seen top-ranked players take a break for a couple months, return and then fail to break the top 20. Players share skills and new tricks, so the entire community quickly advances to a higher level. In that way, Foldit is also a unique experiment in the power of games as teaching tools, he said. People can become micro-experts without even realizing it.

“You can just skip a college degree and a Ph.D and everything else and do even better than all these Ph.D scientists. So imagine you can do that for education in general,” he said. “Not only are people learning more, but they think math and science is fun, and that is rarely the case.”

The learning curves can be steep, but players also get invested in a game after they’ve tried, failed, tried again and improved. Humans learn naturally in a way that will never be easy for a computer, said Treuille, who admits he is not nearly as good at his game as the players.

“When we started EteRNA, the players kind of sucked, I’m not going to lie to you. They were much worse than the computer algorithms,” he said. “But we made it a game, we made it fun, we incentivized people to play, and we said ‘It’s up to you. Make RNAs that fold properly.’ And they learned and learned.”

Players shared hypotheses and strategies on message boards; some players excel at finding anomalies, and others are good at answering questions, Treuille said.

“Every single week the players got better, and within three to six months they were soundly beating the computers,” he said.

Even in complex games like Foldit and EteRNA, the games are largely about image recognition, if for no other reason than it’s simpler to design a game around such problems. But Popović and Treuille don’t plan to stop there.

Popović is building a new web-based game, tentatively called Biologic, that will ask players to create new synthetic molecules, an even bigger problem than protein folding. He plans to launch it in April. He also wants to build a game that would create maps of computer programs and ask players to find every security lapse or bug. He even imagines a game to eradicate corruption, he said — it would take all public records in a given country and map all possible connections between them. Players would find all possible feedback loops or payment correlations, which would then be investigated.

“All these whistleblowers would be all over the world, tracking down people who cheat,” he said.  ”In general, we are trying to see if we can tackle and solve really hard problems, that computers by themselves cannot solve and people by themselves cannot solve. That’s what’s exciting about games. I don’t think there is anything out there that is capable of keeping people so engaged for so long.”

Planet Hunters asks volunteers to search data from the Kepler Space Telescope and spot star brightness anomalies that could indicate a transiting planet. You can check back on the stars you’ve classified and learn more about them.

The trick is convincing hard scientists that making games out of their most pressing problems is a good idea. This is still not easy to do, Treuille admitted.

“The successful games have involved very talented game designers, but also really extraordinarily open-minded and committed hard scientists, who are willing to put yup with people who don’t know what they are talking about, talking about making games out of their research in the vain hopes that someday it will tell them something useful,” he said. “That’s a really adventuresome outlook on the world.”

Let’s face it — some of the tasks, and several of the projects on the Zooniverse, are inherently pretty tedious. But imbued with purpose and scientific meaning, these boring tasks suddenly become interesting; I love the idea of finding exoplanets by myself. And I’m not alone — players lose interest when developers dampen the science, Treuille said. Add incentives like rankings and message boards, and a whole community blossoms.

I started playing EteRNA because I was writing about it, but I don’t plan to stop, at least not for a while. There’s something so satisfying about clicking little dots to make a new chemical bond, locking a virtual molecule into place and earning that trilling harp sound that means you got it right. And if it someday means something real for science — that’ll be the real win.