Piezoelectric Remote Control Changes Channels When You Bend It

Piezoelectrics, a technology in which motion creates a small voltage, is one of our favorite up-and-coming areas of research, whether... 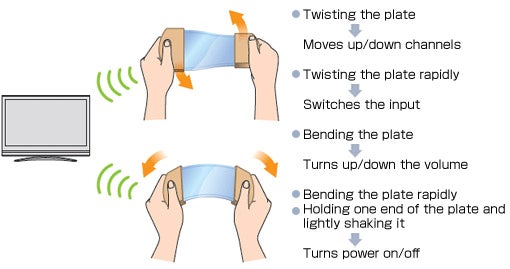 Piezoelectrics, a technology in which motion creates a small voltage, is one of our favorite up-and-coming areas of research, whether it’s powering DARPA’s beetle-bots or dampening bumps in the road. Now, Japan’s Murata Manufacturing claims they have come up with a remote control that works by harnessing the piezoelectric power generated by, well, bending and twisting the remote itself.

Called the Leaf Grip Remote Controller, the remote looks mostly like two handles with a transparent screen between them. That screen, or, more accurately, that film, has two layers of piezoelectric sensors, one of which detects bending, while the other detects a twisting motion. The film is unusual in that it shows no signs of having any pyroelectric properties, which often go hand in hand with piezoelectrics. Pyroelectrics, as the name suggests, generate voltage when exposed to changes in temperature, which Murata says “is a drawback because they cannot detect bending and twisting vibrations separately from changes in temperature.”

The remote works essentially like you’d think it would: Twist the sides to move up and down channels, bend the film to change volume, that kind of thing. We do, of course, have to question the usefulness of such a control method over, you know, buttons, but it’s still pretty impressive that they’ve managed to pull it off (if they have; we haven’t seen the remote in action). What do you guys think? Any interest in bending your remote control?