Even a great camera won’t take memorable shots if it’s so big that you tend to leave it at home.... 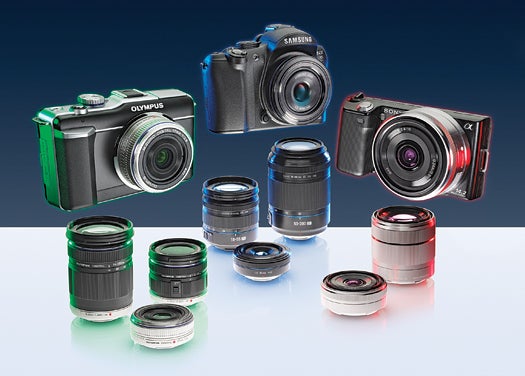 Even a great camera won’t take memorable shots if it’s so big that you tend to leave it at home. So companies are creating models that aim for a happy medium between pocketable point-and-shoots and higher-quality SLRs. This new breed can change lenses to suit a shot, like an SLR does, but ditches the optical viewfinder and the bulky mirror that sends it light. That means compromise: Autofocus isn’t SLR-fast, there are fewer lenses, and point-and-shoots are still smaller. We tested which interchangeable-lens compacts (ILCs) hit the sweet spot.

BODY SIZE: 4.5 x 2.8 x 1.6 in.
THE FEATURES: The E-PL1 is one of the most compact cameras to use a format called Micro Four Thirds, which started the slimming ILC trend in late 2008. Its image sensor is smaller than most digital SLRs—about 7/10 the size—yet about nine times that of a point-and-shoot.
THE PICTURES: The small sensor still snaps outstandingly crisp, sharp photos. But it does generate a lot of image noise—grainy spots most apparent in low-light pics. In the end, the E-PL1 is mainly for users who put a premium on petite.
GET IT: $600 (with lens); olympusamerica.com

BODY SIZE: 4.8 x 3.4 x 1.6 in.
THE FEATURES: Samsung’s first ILC uses the same size sensor as an SLR, outmeasuring the Olympus. Unfortunately, the camera is also larger, partly because it builds in an electronic viewfinder (a tiny LCD eyepiece to mimic an SLR’s window) that, sadly, blurs when it moves quickly.
THE PICTURES: The larger sensor does the trick for eliminating grainy image noise. The NX10’s overall image quality is on par with a similarly priced SLR. On the other hand, it’s not much smaller, and its autofocus is slower.
GET IT: $700 (with lens); samsung.com

BODY SIZE: 4.4 x 2.4 x 1.6 in.
THE FEATURES: The Sony combines the Olympus’s small body with the Samsung’s sensor size and adds some tricks. It takes 1080i high-def videos (the others do 720p) and autofocuses while filming. It fires seven shots per second, and its high-dynamic-range mode catches detail in bright scenes.
THE PICTURES: The photo quality is about the same as the Samsung’s, and although the autofocus speed still lags behind an SLR’s, it’s close. That, plus its near-pocketability and fun features, makes it an exceptional camera—and the best of the bunch.
GET IT: From $650 (with lens); sony.com