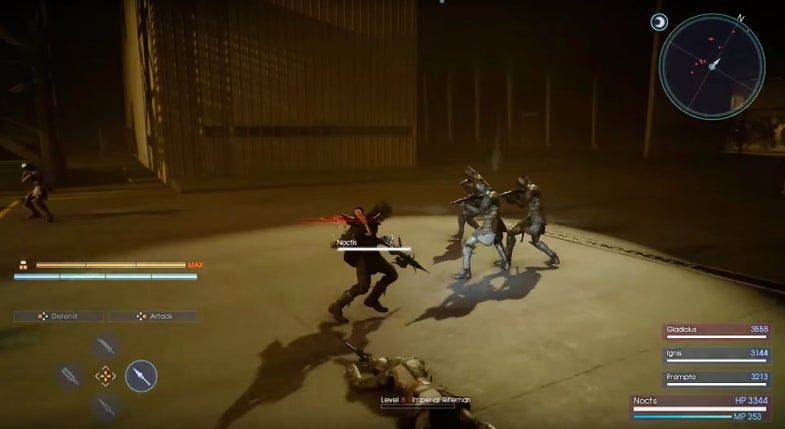 A new trailer showing what to expect from Final Fantasy XV's battle system eschews the turn-based nature of the title and edges closer to real time action. Square Enix
SHARE

Final Fantasy was once software company Square Enix’s last ditch effort to make a role-playing game before going out of business. Now that the series has reached its 15th installment, the popular Japanese-RPG maker is looking to change how players fight their way through the game’s environments. Following a fun-loving roadtrip trailer, Final Fantasy XV has finally seen its new battle system unveiled to the world. You can check out the three minute video below:

The new way of fighting is closer in line with many action games that have recently hit the Playstation 4 and Xbox One. Traditionally, Final Fantasy games have relied on a turn-based format for battling enemies as well as Active Time Battle — a system that combines turn-by-turn fighting with actions that require you to react instantly in the moment.

Square Enix’s new combat footage shows controls appear on screen, allowing gamers to sneak up on enemies. In the Niflheim Base footage depicted, Final Fantasy-character Noctis is able to stealthily take out enemies using by taking cover and “warping” behind them. The Warp Kill is reminiscent of stealth methods we’ve seen in games like Batman: Arkham Knight, Metal Gear Solid or any number of recent action titles. While JRPG fans may scoff at Square Enix eschewing the traditional form of fighting they’ve become used to, the new combat system gives Final Fantasy XV a fresh feel.

The Final Fantasy series has a lot to look forward to in the future. Along with the coming release of XV, fan-favorite Final Fantasy VII is slated to see an HD remake for the PS4. Square Enix’s first 3D Final Fantasy game will come with drastically updated graphics, a similar story and, presumably, a battle system similar to the company’s mashup series with Disney’s Kingdom Hearts series. Though with FF XV’s new battle system coming, we may see functional elements of the play style incorporated in the updated classic.

An official release date for Final Fantasy XV has yet to be confirmed. We’ll likely see further details surface from the Final Fantasy XV Uncovered event in California next month. In the meantime, this footage will have to hold fans over.