What Indigenous fire practices can teach us about saving Southwestern lands 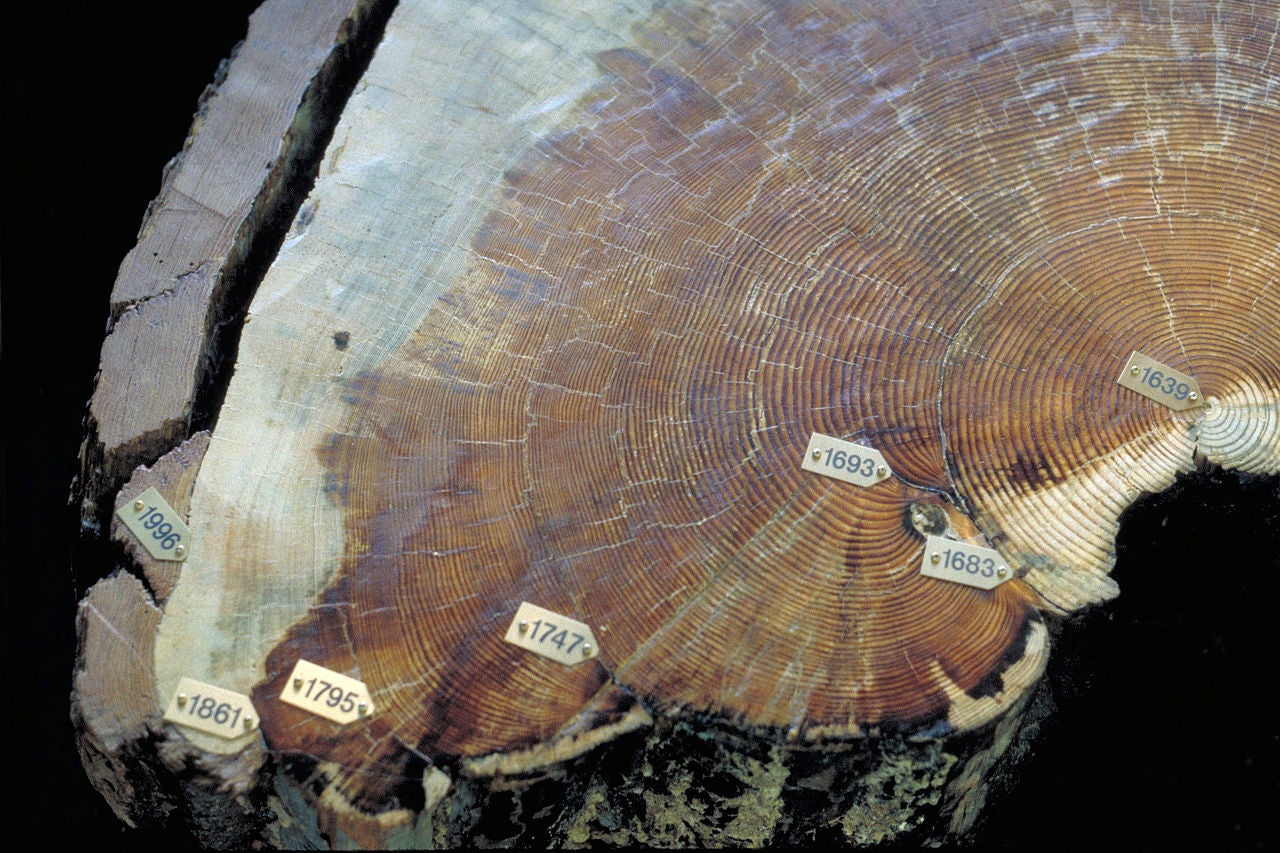 Tree rings, like this crosscut of a Ponderosa pine, can reveal fire scars and historic information about forests. Christopher Roos
SHARE

Massive wildfires in recent years have wreaked havoc in the US—causing health complications, disrupting industries, and displacing long-standing residents. While climate change has intensified wildfires across the country, scientists have said that the US Forest Service’s past policy is partially to blame. In the 20th century, the agency extinguished all wildfires, even small fires that posed no immediate danger to human lives and infrastructure.

However, ecosystems like those in the southwest require some fire to remain healthy. Regular fire prevents the forest from overgrowing, clears out dead organic material, and encourages the growth of certain plant species. In the past few decades, forestry managers have attempted to recreate wildfire management practices from the Indigenous peoples who were once the primary stewards of the land.

One such practice is creating controlled “good fire” also called prescribed burning. Intentionally burning parcels of land helps kill off fuels, like grasses and small trees, that would feed massive and destructive wildfires. But scientists have wondered how much of an effect these cultural burning practices had on the ecosystem when fire ran its natural course, before the Forest Service’s suppression policy existed. A new study from Southern Methodist University gives new insight on how much of an effect Indigenous burning practices had on the land.

The study, published on December 7 in Science Advances, examined the burning practices of three different tribes native to the southwest and compared it to the size and intensity of historic wildfires. Using tree ring records, the researchers found that prescribed burning served as a buffer for climate conditions from the years 1500 to 1900.

[Related: How we can burn our way to a better future]

The data reflected a typical climate-fire pattern in the southwest: one to three years of above average rainfall followed by a year of significant drought. The rainfall allowed more vegetation to grow, then drought dried out the grass—becoming fuel that encouraged fire to spread. This pattern occurred regardless of whether tribes practiced prescribed burning or not. But when they did burn, the practice weakened the climate linkage, meaning the timing and the size of fires weren’t as influenced by moisture patterns, the study authors explain.

“This study is very careful in where it looks, in what period of time it looks at, and how it looks at the fire-climate relationship versus fire frequency, your fire seasonality,” says Christopher Guiterman, study coauthor and fire ecologist at the University of Colorado Boulder. “That to me uncovers the fingerprint of Indigenous management in a way that had not been shown before.”

Much of what the study did was break down exactly how and when tribes used fire. Each tribe included in the study—Navajo Nation, Pueblo of Jemez, and the Apache tribe—used fire differently depending on their economic and cultural conditions. The Diné of Navajo Nation used fire primarily to manage pastures. On land where their sheep grazed, fire incidence was less frequent. But land that served as travel corridors, where the grass grew freely, had higher fire incidence. The Hemish people of Pueblo of Jemez used fire in horticulture to clear fields and recycle nutrients. They also used it to burn shrub patches to usher in long, straight re-sprouted branches, which are good for basket weaving. The Ndée of the Apache used fire to manipulate wild plants, help grow tobacco, and drive deer into certain areas.

While the total amount of area burned remained the same after prescribed burning, the size of burn patches differed from periods with no prescribed burning. Rather than one large wildfire, there might be small patches of fire. “Lots of small, prescribed burns can help reduce climate vulnerability of places that matter to us, whether those are around human communities or other parts of the landscape,” says Christopher Roos, the lead author of the study and a professor of anthropology at Southern Methodist University.

Roos says that Indigenous knowledge and expertise played an integral part in shaping how the paper communicated prescribed burning practices. Four tribal members coauthored the recent study. The team relied on archaeological evidence of prescribed burning to determine when tribes occupied the land. But the record isn’t perfect. The Ndeé, for example, have left a light archaeological trace but members say they’ve been on the land since time immemorial. “Nobody was comfortable with the idea that people were absent, even in the absence of archeological evidence,” Roos says. “So it’s not periods of use and no use, or periods of presence and absence. It’s periods of intensive use and light use.”

Roos hopes the study could provide strategies to policymakers in the face of increasing massive wildfires in the southwest. These Indigenous practices have shown positive benefits for the environment and for people, says Roos.

“I’m not Indigenous, but I try to hold up a banner to those in decision-making positions that Native American folks have managed fire for centuries in these landscapes,” he says. “These long histories of Native Americans and fire should give us hope about what we can do, rather than just feeling helpless in the face of climate and wildfire challenges.”